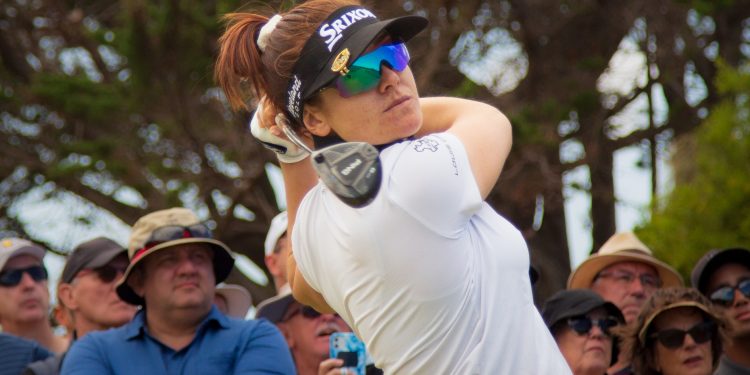 
The major champion went out in the final group of the women’s field alongside former Western Australia teammate Whitney Hillier, facing a two-shot deficit to the Ladies European Tour player. But it didn’t take long to reel her friend in and take a lead that she didn’t relinquish for the rest of the day. “It felt different when things go wrong, when you’re playing well it is a good vibe, I don’t think it affected me too much, but I definitely felt for ‘Whippa’ out there, because she hit really good shots, but just like 13th Beach can do, it can chew you up mentally,” Green said of Hillier’s struggles on day three.

RIGHT: Hillier and Green warm up on the putting green before the third round. PHOTO: Adrian Logue.

“We will be paired again tomorrow and she will hopefully have some more positive momentum tomorrow that means all of us play good golf.”

Bogey at the first was not the start Hillier was after as she searched for a maiden professional win, but the 31-year-old managed to right the ship with birdies at the next two, Green making two of her own on the 2nd and 4th.

The lead switched hands at the par-5 5th hole when Green made a birdie four, Hillier taking a bogey six to return to the same 10-under score she started the day on.

Green stayed steady during the blustery afternoon 25 minutes south of Geelong, making her pars and adding birdies at 9 and 15 to reach 13-under, before a bogey at 16 saw her drop back to 12-under, where she remained after consecutive pars across the final two holes.

The back nine of the Beach Course has given Green trouble all week. And the West Australian will be hoping things change on Sunday to give her a more stress-free run home.

By the time Green recorded her first scorecard blemish of the week at the 16th, Hillier had herself given three shots back, three consecutive bogeys starting at the 12th sending her back to the chasing pack.

“I’ve never really been in this position to have such a big lead, I am excited for it.” – Hannah Green.

Hillier was able to claw a shot back from Green’s advantage at the par-3 17th with a birdie, a disappointing bogey at the last seeing her finish on seven-under for the tournament and in a share of second with Karis Davidson.

Davidson, yet to play her first event as a fully-fledged LPGA member, made birdie at the18th and will likely still be ruing her second round 76 on a day when the other players in contention made their move,

Needing some help from Green and a low round of her own, Su Oh is the next best at five-under for the tournament, having at one time reaching eight-under early in her round.

“It is probably a bit easier for the chasing pack, they can try and post a number and hope that I crumble that’s what everyone probably really thinks,” Green said of playing with a five-shot lead. “I’ve never really been in this position to have such a big lead, I am excited for it, hopefully the crowd can get behind us all.” Green’s ball-striking has been a significant advantage around 13th Beach this week. PHOTO: Adrian Logue.

Despite her well-earned marquee status as a two-time winner on the world’s biggest women’s circuit, Green has only ever won pro-am events at home, a fact that might give her pursuers some hope on Sunday, when they might also wish the expected rust on her game after 12 weeks away from tournament play finally shows.

But Green is a proven winner, and has shown she is comfortable with top billing and arguably the biggest crowds each and every day regardless of her tee time.

And the 25-year-old will certainly have plenty of eyes on her tomorrow, but first she planned for a relaxing evening at home with her boyfriend and fellow Tour player Jarryd Felton.

“Think we will get some takeaway. Monica (caddie Monica Marchesani) and I finished our jigsaw puzzle, but she also made me another one.”