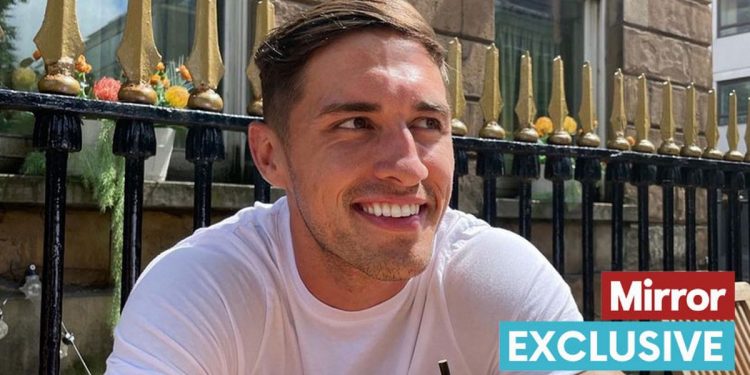 He’s recently revealed that he’s now a single man after his split with a mystery girlfriend of two-years.

And Greg O’Shea has finally lifted the lid on why he kept his leading lady’s identity under wraps for so long.

The Love Island 2019 champion is currently still dealing with the heartbreak of their relationship breakdown, but admits that the pair were forced to call it a day because they were on ‘completely different pages’ in their lives.

While Greg’s mystery ex-girlfriend – who is rumoured to be influencer Katie Hutchins – was hell-bent on focusing on her career during their time together, the former Irish rugby player wanted to live a more spontaneous lifestyle which was not solely based on his career goals.

Problems also arose between the pair when they realised that they would probably never settle in the same place due to the fact they lived in different places – with Greg settling back into his life in Dublin ahead of his new fitness venture, Bettr With Greg, which is a HIIT and Pilates subscription programme designed to improve physical and mental wellbeing.

While the Irish heartthrob is still dealing with heartbreak, describing the feeling of grieving as ‘bad as a death’, he spoke lovingly about his ex-girlfriend in an exclusive interview with Daily Mirror.

When asked why he chose to keep his relationship so under wraps for the past two years, Greg explained that although he was head over heels about his other half, the relationship didn’t quite reach that level yet.

Greg admitted he still has feelings for his ex
(

The Irish star is newly single
(

“The reason why I didn’t go public with my last girlfriend was because I was never 100% sure. With things like that, you kind of want to be 100% sure privately in the relationship, behind closed doors and when you’re both alone before you let millions of people in.

“I think you have to be so sure about this person. And so does your family and you friends. You should be ridiculously madly in love with one another and spend so much time together and then you can solidify the relationship and feel secure enough to let millions of people on social media it on it,” Greg explained.

Sadly, his relationship with his ex-girlfriend never reached that level.

“It never got to that stage to be honest. I was mad about her, she was one of the loveliest people I have ever met in my life but we are both in just completely different parts of our lives right now,” the Irish star went on.

“Whereas she just wants to focus on work, I’m much more of a lad who wants to have fun and travel and live a life that’s more than just work. So unfortunately, we kind of just had to walk away from one another.

“I am heartbroken over it but I would have been miserable as well trying to force something that wasn’t right.”

Thankfully, Greg has got a brand new venture which is launching on Thursday to keep his mind off his recent split.

The star will lead live and on-demand classes and design fitness programmes using his expertise garnered from a decade of professional sport, which culminated in him competing at the Tokyo Olympic Games last summer.

Lifting the lid on his new ventur e: “It’s all very exciting. I’m very nervous but so excited for it too.

“Every single class will be live with me, so I have to be there and be on top form. That’s why I’m quite nervous, because it’s a big responsibility, but then that’s the joy of it too – Bettr With Greg means you’ll be with me and we’ll be doing it together.

“I was doing online fitness classes on YouTube and Instagram and people were enjoying them during lockdown. At the time, I felt like I was part of a community, so I took that concept to create Bettr With Greg.”

Subscription to the service, which will be available via the Bettr With Greg app on ios or android, and also on www.bettrwithgreg.com, will cost £9.99 a month.