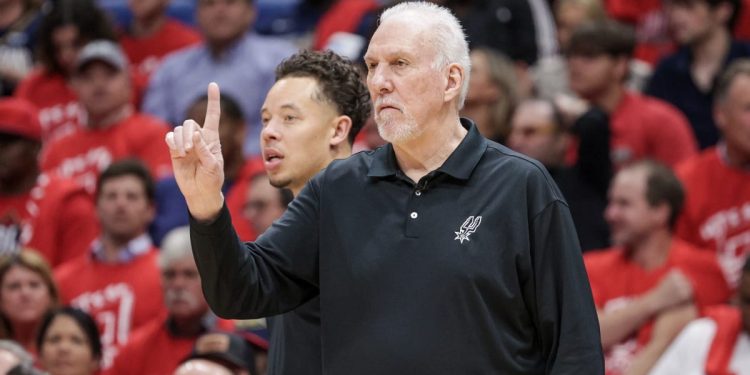 The Spurs’ season came to an end on Wednesday night after a 113–103 loss to the Pelicans in the play-in tournament. Any resolution about the future of the team’s head coach would have to wait until a later date.

Longtime coach Gregg Popovich declined to answer questions about whether or not he planned on returning to San Antonio for another year. The 73-year-old has been the head coach of the Spurs for 26 seasons.

The Spurs made the playoffs in 22 consecutive seasons from 1998 to 2019 under Popovich’s stewardship, winning five NBA championships in the process. Since then, San Antonio has finished with a losing record in three straight years, missing the postseason each time.

The Spurs fell behind early against New Orleans on Wednesday, trailing by 11 at halftime and by 17 through three quarters. San Antonio crept back into the game in the fourth, using a 16–1 run to get within six points with just over five minutes to play, but could never get any closer than that.

Devin Vassell led the Spurs with 23 points on seven made three-pointers. CJ McCollum led all scorers with 32 points and seven assists, while Brandon Ingram added 27 points on 11-for-19 shooting.

The Pelicans will face the Clippers in Los Angeles to conclude the play-in tournament, with the winner advancing to the first round to take on the top-seeded Suns.

9 ways how To Outfox Children With An Easter Egg Hunt!