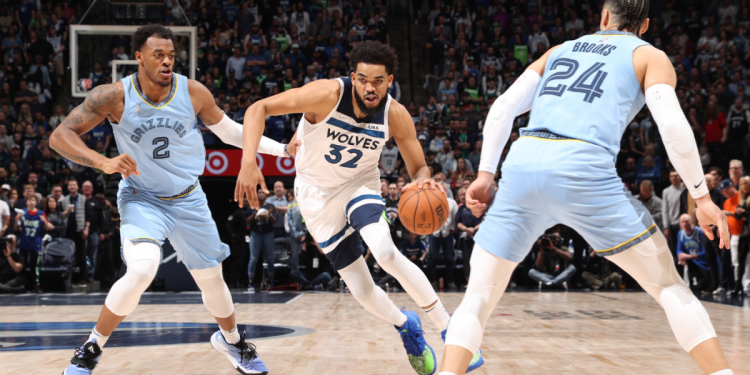 The Minnesota Timberwolves evened their first-round series against the Memphis Grizzlies with a nerve-wracking, 119-118, Game 4 win in Minneapolis on Saturday night. The series will now shift back to Memphis with things all squared up at 2-2.

Karl-Anthony Towns was the story of Game 4, making amends for a disappointing effort in the previous game by putting up 33 points and 14 rebounds on 8-for-17 shooting, while going 14 of 17 from the free throw line. Anthony Edwards returned from a brief injury scare in the first quarter to put up 24 points on 4-for-8 3-point shooting.

Desmond Bane kept Memphis afloat for much of the evening as multiple Grizzlies dealt with foul trouble, finishing with a game-high 34 points on 8-for-12 3-point shooting. Dillon Brooks added 24 points, while Ja Morant struggled from the field for most of the night, but ended with 11 points, 15 assists and eight rebounds.

Here are a few takeaways from Saturday’s game, along with a recap of our live updates.

Virtually no star in these playoffs has endured as much criticism as Towns did after his puzzling Game 3 performance, in which he scored just eight points on four field goal attempts while picking up five fouls. He needed to respond on Saturday, and boy, did he ever.

Towns came out aggressive from the jump, refusing to settle for jumpers and getting into the lane to draw free throws. Wolves coach Chris Finch said afterward that Towns played “pissed and loose.” The most free throws Towns had ever attempted in a playoff game was eight, and he more than doubled that in Game 4.

These weren’t empty calorie numbers either, as Towns did much of his damage late after the Grizzlies surged back. He scored 13 points in the fourth quarter on 4-of-5 field goals, and made two game-clinching free throws with 4.4 seconds left.

The Timberwolves have to be pleased with the performance they got from their star on Saturday, and it could provide the team with some momentum as they head back to Memphis for Game 5.

Coming in with a career playoff scoring average of 27.8 points, Morant looked baffled for most of the evening when it came to creating his own offense. He did a great job facilitating with 15 assists, but the lanes he usually finds toward the basket simply weren’t often there, and when he did get to the rim he struggled to finish through Minnesota’s athleticism and length.

“I’m not Ja right now,” Morant said after the game. “I’m not playing above the rim.”

On top of his difficulties scoring, Morant was also saddled with foul trouble for the majority of the night, which led to him playing only 33 minutes (he played 40 minutes in Game 3). The Wolves also relentlessly attacked him on the other end, as they’ve done for most of the series, which zapped Morant’s energy and created the foul issues.

Like Towns, Morant will look to bounce back in front of his home crowd in Game 5.

JMac out of nowhere

We’ve seen it time and time again in the playoffs. You account for the stars, but there’s usually one or two role players every game who make the difference. On Saturday that player was backup Timberwolves guard Jordan McLaughlin, who scored 16 points on 4-for-4 3-point shooting in just 14 minutes. His buckets came at big moments as well, like this fourth-quarter 3-pointer after the Grizzlies had cut the lead to five points.

It’s no secret that Minnesota relies on its three stars — Towns, Edwards and D’Angelo Russell — for the bulk of its scoring, but key contributions have come from the bench all year long. In a game as close as Saturday night’s, McLaughlin’s 16 points were absolutely crucial.