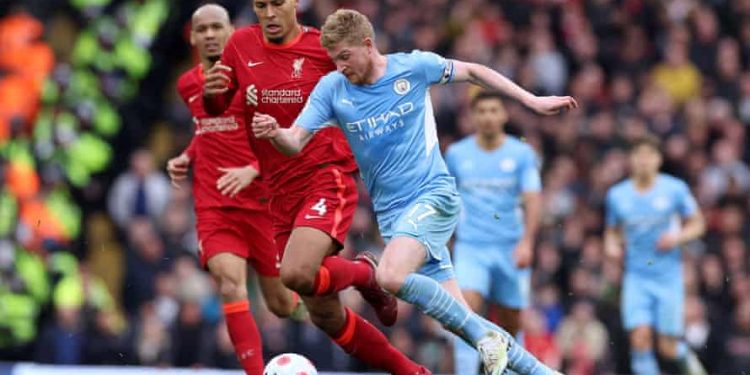 
The day after the craziness and pulse a little closer to resting levels Pep Guardiola did as he always does. The Manchester City manager looked into his laptop to run through the forensic debrief and he pressed pause.

Guardiola would have done so in the 73rd minute of the 2-2 thriller with Liverpool at the Etihad Stadium when Gabriel Jesus worked an opening to the right of goal. Kevin De Bruyne was on for the cut-back. Just pass it to Kevin. But no. Jesus still shoots into the side net and 50,000 voices still scream at him – most vociferously that of De Bruyne.

The moment that had haunted Guardiola after the game, which he referenced with such overt frustration, would not have looked any better, either. Phil Foden to De Bruyne to Riyad Mahrez, the substitute, in the 94th minute. Pause. The first-time touch into Foden still looks on, although Mahrez has clearly made up his mind to jink inside. Pause again. The pass to Foden appears an even better bet now. Play. Mahrez still sends the chipped shot high.

Guardiola understood. For him there can be no recriminations, particularly not after such a dynamic team performance; a day when he got so much right, including his selection of Jesus and Raheem Sterling in the front line. Their runs in behind the Liverpool defence caused all manner of problems, testing the recovery pace of the centre-halves and even making Virgil van Dijk look a little edgy at times.

“I make ‘pause’ … the game stops, nobody moves … don’t pass the ball there,” Guardiola said. “But in football, they have to make a decision in half a second. And it’s difficult, always. My reaction on the bench … Aaargh, how we don’t do it? Hands moving around. But after, I understand them. It’s difficult sometimes and, in the final third, in the box, it’s the most difficult position.”

Guardiola talked about a missed opportunity, how City had allowed Liverpool to remain alive in the Premier League title race when they might have killed them. But the over-riding feeling has been one of satisfaction, of confidence for the battles ahead – the next of which comes at Atlético Madrid on Wednesday night in the Champions League quarter-final; City are 1-0 up from the first leg. Then it is Liverpool again in the FA Cup semi-final at Wembley on Saturday. And who knows? It could yet be City v Liverpool in the Champions League final.

There has been much said and written about Jürgen Klopp’s nine career victories against Guardiola teams; four of which came when the Liverpool manager was in charge at Borussia Dortmund and Guardiola was at Bayern Munich. No manager has won more against Guardiola. For the record Guardiola also has nine victories while there have now been five draws.

But Guardiola has been the boss over the past four seasons, winning four of the nine contests in all competitions and losing only one. On Sunday his players made many more good decisions than bad; they created plenty and gave up relatively little. There was a parallel to the 2-2 draw at Anfield from earlier in the season in that City might have been out of sight at half-time. Yes, the profligacy at the big moments is a worry but more important is that the moments are being created.

Guardiola knows it is about the performance levels and so does De Bruyne, who is in electric form. “We played a good game and we deserved to win,” he said. “But in the end we take it. They have quality and we did not give too much away.”

What was clear from within the City camp was how much they respected Liverpool for coming to play, which was in stark contrast to the approach of Atlético from the previous Tuesday. The Spanish team did not muster a single shot during the first leg.

“Against Atlético … where you play against such a defensive wall, it is not the best game to play or watch,” De Bruyne said. “There’s nothing we can do about it. If a team comes here to play, it is always a good game and Liverpool come here to play the way they play.”

Atlético will plainly present a different challenge and, for City, the schedule is unforgiving. Pause and recover on Monday. Travel on Tuesday. No time to train, as Guardiola says. Then play. It will be the same routine leading up to the FA Cup semi-final.

Guardiola is conscious that Liverpool are at home in their Champions League quarter-final, second leg on Wednesday night against Benfica. “I could say: ‘Oh, thank you so much Premier League … you could give us an extra day,” Guardiola says. “But how? In this country, it’s impossible. And I love that because it will show whether you can overcome the bad moments and play.”

De Bruyne is also in the groove. “It would be nice to think about the end of the season [title run-in] but you don’t get the time,” he says. “That is maybe a good thing because you just play, play, play and then we will see what happens. I think the Atlético game will be a little bit tight at the beginning but it has to change if the score stays the same. I don’t expect it to be a similar game to the first leg.”