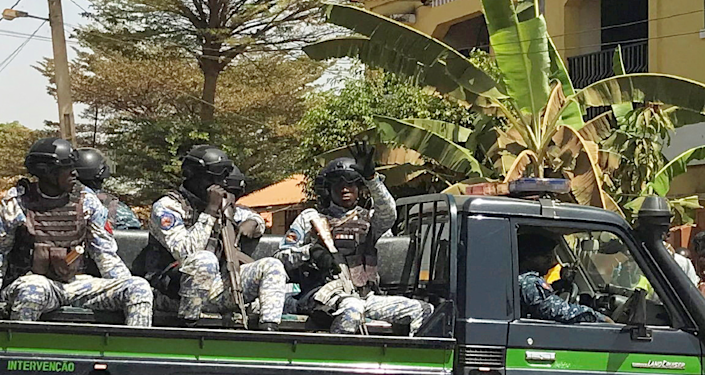 
At the beginning of the month, it looked like Guinea-Bissau was about to fall victim to what has been called West Africa’s coup epidemic, but some are now doubting the official version of events.

Having seen more than a dozen coups or attempted coups since independence in 1974, and being used as a conduit for drug trafficking, news from Guinea-Bissau that people were trying to unseat President Umaro Sissoco Embaló fitted a pattern of instability.

Mali, Guinea and Burkina Faso had all recently succumbed to military takeovers and on 1 February armed men shot their way into the government palace in the capital, Bissau.

The 49-year-old president and the cabinet were inside the compound having a meeting.

But after five hours of fighting, which left 11 dead, Mr Embaló said it was all over and linked what he called an attempted takeover to the illegal drugs trade.

Speaking again this week he named three men who had previously been arrested by the US for trying to ship cocaine as being behind the coup attempt.

One of them was the former head of the navy, José Américo Bubo Na Tchuto, and the president said that he had seen the other two himself as he was trying to hide from the attackers.

The three have since been arrested and have not commented on the accusations.

Talking confidently and in a relaxed tone, the president told journalists on Thursday that he survived an attempt on his life because of his faith in God.

The possibility that narcotics had something to do with the attack rests on Guinea-Bissau’s reputation that it has become a transit point for drugs coming from Latin America on their way to Europe.

The UN and the US have in the past described the country of two million people as a “narco-state” where politicians were funded by criminals and networks within the government were established to protect the illegal trade.

In 2019, Mr Embaló won disputed elections and promised that there would be a “zero-tolerance” attitude to drug trafficking.

His backers say he has created conditions for the police to be able to fight against the trade but it is not clear if it has made any difference.

“Some of those previously involved in it seem to have made a comeback,” says Lucia Bird of the Global Initiative Against Transnational Organized Crime.

‘We are at peace’

But beyond the walls of the government buildings, questions are being raised.

In a barbershop in the centre of Bissau, one customer told me with certainty that he does not believe there was a coup attempt.

“Everything is calm. We are at peace in Bissau,” he insisted. “Nothing happened. Look around you.”

Nevertheless, despite a lack of a heavy military presence, things have been tense and one young woman said that it was like the country “was going backwards”.

“How can you tell me there was gunfire for five hours and no military forces came to help the cabinet? This is strange,” he told the BBC.

“The citizens of Guinea-Bissau want to know what is really behind this alleged coup attempt. Who were the people who carried out this coup? How many were there? Who was in command of them? What were their real goals?”

The president has so far failed to provide full answers to these questions but has launched an official inquiry. On Thursday he emphasised that “the hands holding the guns are people with links to the big drug cartel”.

When asked about whether he still believed he had the army’s backing when it appeared slow to come to his aid, he said he did, but added that the most important thing was that he believed in God.

There is another theory put forward by political analyst Rui Landim, which could explain the president’s survival and why the army seemed reluctant to help.

He told the BBC that he thought Mr Embaló may have staged the coup in order to persuade the West Africa regional group Ecowas “to send troops to maintain him in power”.

Differences between the president and both the prime minister and parliament have left him in a weakened position.

But the president has said that the pledge by Ecowas to send troops was an act of regional solidarity.

Amid the uncertainty about what really happened almost a fortnight ago there are some here who remain nervous.

In the immediate aftermath of the attack some fled to the countryside and they have not yet all returned.

David Chalmers: ‘We are the gods of the virtual worlds we create’