Hafthor Bjornsson Vs Eddie Hall, when is it on? strongman fight date, insane 60kg body transformation 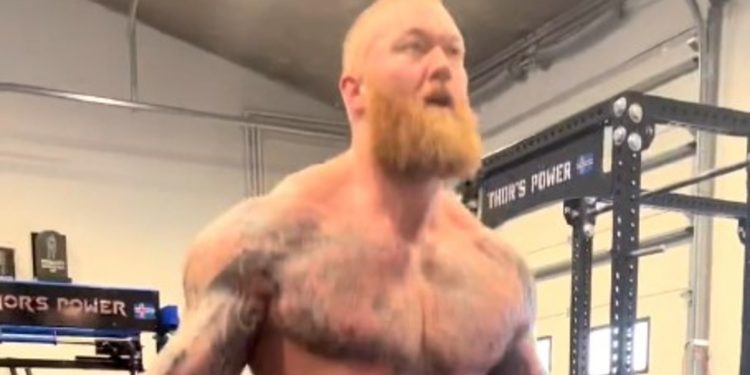 
He may have been terrifying as The Mountain off HBO’s Game of Thrones, but Icelandic strongman Hafthor Bjornsson is looking even scarier in 2022 as he prepares for a boxing grudge match with rival Eddie Hall.

The pair have had a bitter rivalry for years but after false starts, they will finally get in the squared circle in March for the much anticipated grudge match.

Set to be “the heaviest boxing match in history”, Bjornsson posted on an Instagram video: “March it is. Fight is on. Let’s f***ing pray Eddie doesn’t back out again!”

Hall backed out of the fight late in the piece due to a torn pec, Bjornsson instead made short work of arm-wrestler Devon Larratt.

It matches up with what Hall released on his YouTube Channel, revealing earlier this week: “The fight is going to be announced very soon — we are roughly seven weeks to the fight.”

It would place it in late March.

But there is no doubt the pair are serious about the move into the boxing ring as they try to settle their feud.

Hall shared photos of his cut physique in recent times, having shed more than 30kg to reach 163kg in 2020 after tipping the scales previously at 196kg.

While Hall has held onto his size, Bjornsson revealed he had shredded even further than his remarkable physique he shared in December last year.

He actually revealed in a video a day earlier he weighed 144kg “the lightest I’ve been since starting my boxing career”.

Yep, that’s a 60kg weight drop and he looks every bit a terrifying boxer.

The pair have had a bitter rivalry over the years and Bjornsson couldn’t help himself but to antagonise Hall when he broke the Brit’s dead lift world record of 501kg — by just one 1kg.

The rivalry developed from the strongman circuit where the Icelandic giant finished third or better in the World’s Strongest Man competition every year between 2012 and 2019 including winning the title in 2018, a year after Hall beat him in the competition in 2017.

It was the start of the feud as Bjornsson had accused Hall of cheating in the Viking Press portion of the competition.

Hall revealed the pair used to be friends until the accusation.

“This is what people don’t sort of get — we used to be good friends,” he said. “He’s been round my house and we’ve had parties. We’ve travelled around the world together.

“But what happened at World’s Strongest Man 2017 just threw all that friendship out the window.

“It was a big dagger in the back. That’s irreparable, three or four years with a cloud over my World’s Strongest Man win. What’s that cost me in terms of my career? He just doesn’t care.

“I still haven’t had an apology from him, he’s not denying it. He keeps saying he was robbed, hard done by. At the end of the day, if he’s got solid evidence bring it up. He’s full of s***.

“Thor is not my friend. He was and I can safely say, even with an apology, I don’t want to break bread with this man.”

Hall added that he wants to leave “Thor lying on the floor”.