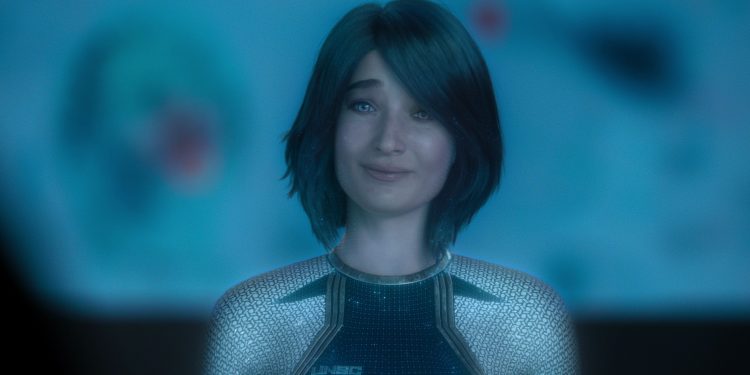 
Meanwhile, we also learn more about Makee. The opening minutes of “Emergence” explain why her abduction by the Covenant was more of a rescue: she lived as a slave in a recycling-processing junk yard. The book she holds is the only one she could find, a romance novel that almost gives her an opening for a first kiss before the massacre.

Yes, it’s a busy episode. Halsey’s manipulations continue as she prompts Cortana to help John break protocol specifically so that the Spartan is more likely to trust his onboard AI later. Back at The Rubble, Quan bribes a threatening Soren to rendezvous with the rebels on Madrigal. Makee is on her way there, too, after wiping out the crew of a UNSC battleship with the show’s first appearance of the alien Lekgolo (the snake-like species that can group together to form the Hunters from the games). Another encounter with the artifact (and some help from Cortana) sparks Chief’s memory of his childhood on a planet claled Eridanus II, the site of a terraforming project where his parents may or may not be alive. And (deep breath) Paragonsky is trying to recruit Miranda for her own secret plans.

On top of all that, the episode seems to want to remind us that Cortana is also the name of a Microsoft product. She’s literally a search engine, answering Chief’s questions about his home world in a way not too far from the natural language processing available at the higher end of the tech spectrum today. The process to create her, though, is all Apple-colored far-future horror.

This episode features two striking gross-out scenes, one of a needle in the proto-Cortana clone’s eye and one of Chief slicing out his own implant with a pocket knife. Despite the effective grossness, the pristine scene of Cortana’s “creation” features the odd ambivalence that I had hoped would become the show’s hidden strength. Instead, the surgical processes are both over-dramatic, clearly made for an audience, and unclear. (Did they really have to physically lift the clone? Is she dead?) The tone can’t seem to fully decide whether this is horrific or glorious, a triumph of science or a human rights violation. Perhaps the show has something to say about way the two are interwoven in the military industrial complex, but, then, perhaps not.

At other times, Cortana is more human. I enjoyed how chirpy she is, and Taylor confidently injects energy into sterile dialogue. But it is sterile. (“Would you like to meet her?” “Not particularly, no.”) There’s little drama in Chief’s rejection and then acceptance of Cortana’s help. The show’s Spartans are, in general, colder than the ones in the books and games. While they don’t have conventional lives, they are capable of kindness (see Jorge-052), shell-shock (see Chief himself), and fun (see the Ferrets). Writing intentionally formal dialogue that still lets glimmers of emotion in must be a difficult thing to do, and the show doesn’t make it work when it comes to Silver Team or Chief’s emotional arc in “Emergence.”

Theoretically, I can see why the show would find a human-sized Cortana with a relatively neutral skin tone more readable than the little, blue hologram from the games. It also gives Jen Taylor the chance to do more of the work herself. But whether it’s because this episode found itself in the middle of the Jen Taylor-Natascha McElhone actor swap or for some other reason, the relationships lack drama despite the high-concept science fiction.