HAMISH MCRAE: Time to be positive over economy amid gloom

This is not a joyful Eastertide. Indeed, it may be the most troubling Easter we have experienced, and there is nothing an economic commentator can write to make it less so.

Even assuming something more dreadful does not happen in Ukraine, this will be a very difficult summer.

But there are positive aspects to the economic outlook as well as negative ones, and identifying both helps us to be more resilient to whatever is thrown at us. We need to look at both.

So first, five of my top concerns, and then five of the positive features to look for through the summer and beyond.

The biggest concern is that inflation becomes embedded. The Consumer Price Index looks set to rise to about 9 per cent this month, dip during the summer and then peak again in the autumn. There is not much that can be done about this. 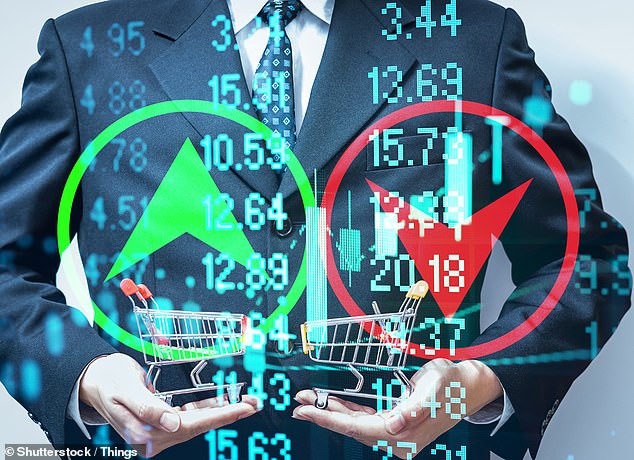 Ups and downs: There are positive aspects to the economic outlook as well as negative ones

What is happening is partly the failure of the central banks to take inflation seriously a year or more ago, and partly the additional strains from war in Ukraine.

If inflation falls back towards 2 per cent next year, then the pressure will be off. But if it sticks at 4 per cent or 5 per cent, it may take several years to get it under control. The main weapon the central banks have is higher interest rates. That would be painful.

The next worry is that the central banks will make a mistake. They have, I believe, made a huge error keeping their ultra-easy money policies too long, and history will deal harshly with them.

So I have little confidence they know what they are doing now. Maybe the US Federal Reserve will increase rates too fast. Maybe the European Central Bank will move too slowly.

Actually I have more faith in the Fed and also the Bank of England than in the ECB, though to be fair it has the impossible task of setting an interest rate that works across such a diverse region.

This leads to my third concern. As the money that flooded into the markets is withdrawn there will be financial failures. We cannot know where they will be.

The legendary American investor Warren Buffett observed: ‘Only when the tide goes out do you discover who’s been swimming naked.’ Well, the tide is going out fast, and many people working in financial services have no experience of that.

So people will lose money. In itself that does not matter – unless of course you happen to be one of the losers. What matters is that the entire fabric of the global financial system does not collapse, as it nearly did in 2008.

There is one specific issue here, worry number four, which is that there will be pressure on sovereign debt in Europe.

Could Italy, with a national debt equivalent to 150 per cent of GDP, afford 5 per cent interest rates? What about Greece? What about France?

Marine Le Pen has dropped her call for a referendum on French membership of the eurozone, but the markets have already started to show worries about the possibility that she will win the presidency next weekend.

Finally, a wider concern. It is that the huge disruption of the past three years might lead to a less efficient global economy. Costs would stay high, trade barriers increase, more funds have to be allocated to military spending, and we will end up with lower growth and lower living standards as a result.

Enough of that; now the five positives. First, there is massive momentum in the world economy, with lots of unsatisfied demand for just about everything from electric cars to holidays abroad. That will keep going for some time. There will eventually be a recession, for there always is, but it is not around the corner.

Next, there is equally huge demand for labour, particularly in the UK. This is the strongest job market for at least 40 years, with unemployment the lowest since the early 1970s. That gives people a cushion against inflation.

Third, many people, sadly not all, have been able to build up cash balances during the lockdowns.

Four, inflation will come down. Fuel will not continue to become more expensive for ever. Even pessimists think it will be a lot lower by this time next year.

Finally, something more general. There has been huge disruption, but that has forced us all to think of more efficient ways of doing things. The squeeze in the labour market will make employers use people more efficiently, and I hope treat them better too.

And that is my Easter wish: we move towards a society where working people are properly valued and respected. That is not too much to ask.

Photographer’s stunning shots show that the Lake District is mesmerising, whatever the weather