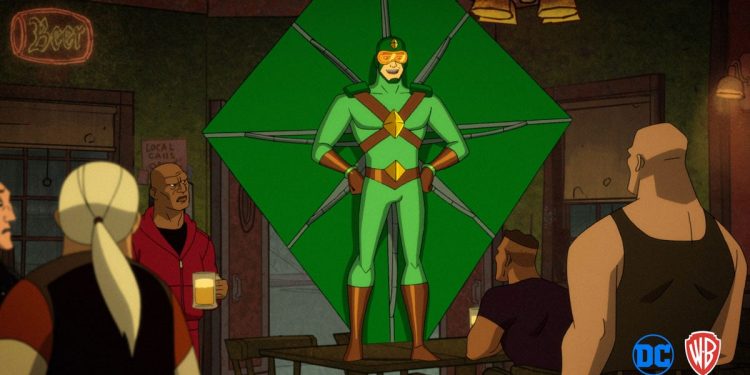 After being left at the altar, Kite Man (Matt Oberg) embarks on a new adventure in Noonan’s, his own spin-off set in the world of DC Entertainment and WB Animation’s hit series Harley Quinn, which will be back for a third season this summer. HBO Max has ordered a 10-episode run for the spin-off.

“Harley Quinn unlocked a world of hilarious possibilities with the iconic superheroes and supervillains of the DC Universe. Exploring this world further with our partners at HBO Max and DC is going to be a lot of fun. Plus, after getting dumped by Poison Ivy, the least we could do was give Kite Man his own show,” Peter Girardi, executive vice president of alternative programming at Warner Brothers Animation, shared in an HBO Max press release.

Dean Lorey is set to serve as the showrunner on Noonan’s, which will follow Kite Man and his new partner the Golden Glider as they decide to buy their favorite bar, according to the official logline: “Lovable loser Kite Man and his new squeeze Golden Glider moonlight as criminals to support their foolish purchase of Noonan’s, Gotham’s seediest dive bar, where everybody knows your name, but not necessarily your secret identity!” I gotta wonder what exactly are the circumstances under which Noonan’s is bought—is it a “we gotta save it” situation, or perhaps a spur-of-the-moment purchase made while high on heartbreak? With Kite Man it’s definitely an “oh sweetie” sort of situation, and the duo agree to offset the costs by doing more crimes.

Suzanna Makkos, the executive vice president of original comedy and adult animation at HBO Max and Adult Swim, added, “We love the wild and fun world of Harley Quinn so much we just had to make a spin-off, and who better to center it around than the outcast Kite Man. Justin [Halpern], Patrick [Schumacker], and Dean [Lorey] have created the perfect local hangout for Gotham City’s not-so-finest at Noonan’s, where bar patrons can blow off steam after a long day of mayhem.” The idea of Noonan’s being a hub for a lot of deep-cut side characters of the DC Universe is an intriguing premise.

Want more io9 news? Check out when to expect the latest Marvel and Star Wars releases, what’s next for the DC Universe on film and TV, and everything you need to know about House of the Dragon and Lord of the Rings: The Rings of Power.