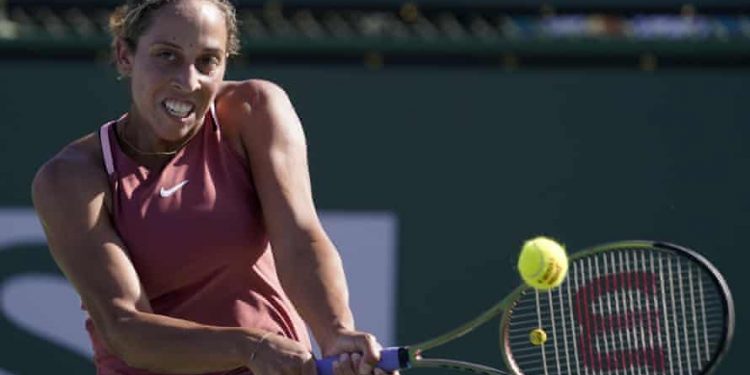 
After the nine greatest days she has ever enjoyed on any tennis court around the world, Harriet Dart’s surprise breakthrough run to the second week of the BNP Paribas Open came to an end in the fourth round on Tuesday with a heavy defeat against a searing Madison Keys, who won their clash 6-1, 6-4 to reach the quarter-finals in Indian Wells.

With her run this week, Dart will leave California as a top 100 player for the first time in her career, rising to become the new British No 2. The 25-year-old’s new ranking, if she can maintain it in the coming months, means she will gain direct entry into the grand slam tournaments and many WTA events as she looks to make a permanent jump on to the WTA tour.

In Keys, Dart simply came up against a much more capable opponent who is in the midst of a resurgence after reaching the semi-final of the Australian Open last year. The gulf in weaponry and weight of shot between Dart, a slight counterpuncher, and Keys was enormous.

From the beginning, Keys served well and she was sharp from the ground, and her greater weight of shot pierced through the court and pushed Dart far behind the baseline.

After striking only one winner in the first set and struggling with her serve, Dart did much better in the second set and took care of her service games until she led 4-3. But at 4-4, Dart missed all four first serves, Keys laid waste to three consecutive second serves in a row, taking the essential break and the match shortly after.

Although her tournament has come to an end, it is one that Dart will not forget. She arrived in Indian Wells having beaten only one top 65 player, Liudmila Samsonova last month, yet after coming through qualifying she clinched three such wins in succession. In the second round, she recovered from a set down to defeat 12th seed Elina Svitolina, her first ever win over a top-20 player.

While the jump in Dart’s level has been significant, her breakthrough comes after a steady and clear period of progression in recent months. After falling outside of the top 170 after Wimbledon in July, Dart rose back up over 50 places to a recent career high of 120.

“My ranking might not show where my level is, but I’ve always believed my level has been there,” Dart said after her third-round win. “I put in the work day in, day out, and finally to be able to put a run like this together, it’s not by chance.”

Throughout her time in California, Dart has shown how her qualities can be effective at this level. She is an excellent athlete with the ability to absorb and redirect pace extremely well, particularly with her backhand, along with ample grit. She has been increasingly bold, stepping inside the baseline, taking the ball early and redirecting it.

But Dart’s game is evidently still underpowered against the bigger hitters in the top 100, her serve is particularly a clear liability, and there is no bigger ball-striker in the game than Keys. Next up she will next face a red-hot Iga Swiatek, the third seed, who defeated Angelique Kerber 4-6, 6-2, 6-3.

Dart’s defeat leaves Cameron Norrie as the last remaining British player in the singles draw as he looks to defend the title he won last October. He will face American Jenson Brooksby in the fourth round on Wednesday.