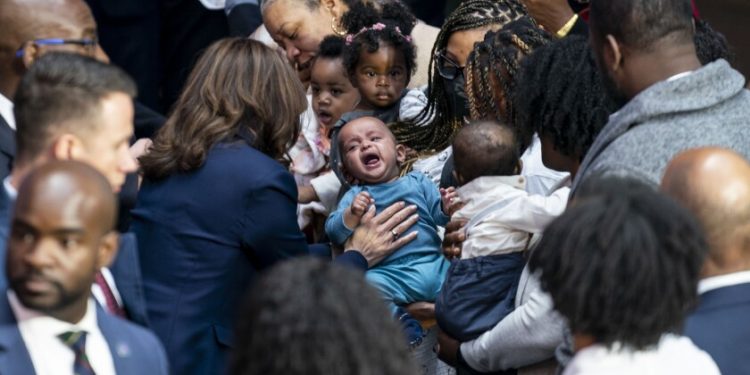 The U.S. is facing a maternal health crisis, Vice President Kamala Harris declared Thursday in remarks at UC San Francisco as she wound down a weeklong trip to her home state.

“Women in our nation are dying at a higher rate for pregnancy-related causes than in any other wealthy and more developed nations in our world,” she told a crowd of expectant mothers and healthcare workers at the university’s William J. Rutter Center.

“Maternal mortality is not only a healthcare issue, it is also a housing issue, a transportation issue, an environmental issue,” she said, noting that women who don’t have access to safe housing or hospital checkups are at greater risk of adverse outcomes.

The speech came after Harris toured UC San Francisco and met with families expecting children and healthcare professionals about the university’s clinical program for Black mothers.

Harris, who has been the face of the Biden administration’s efforts to raise awareness on the issue, has advocated throughout her political career to improve healthcare for expectant mothers.

The administration has taken several actions on maternal healthcare including encouraging states to expand Medicaid postpartum coverage from two months to up to a year and increasing funding for doulas. The White House also sought money for maternal health in its sweeping climate and social spending bill, which has since been shelved.

As senator, Harris sponsored bills that would provide incentives for improving maternal outcomes and training doctors about implicit racial bias in healthcare, which contributes to higher mortality rates for women of color during pregnancy and delivery. Last week, she held the administration’s first Cabinet-level meeting on efforts to improve outcomes for pregnant women.

“This is not something that she’s just talked about. This is something that she’s dedicated time and energy and personal and political capital to investing in,” said Dr. Nadine Burke Harris, former surgeon general of California, whose work with Harris on health initiatives goes back nearly 15 years. Burke Harris has no relation to the vice president.

Before Harris spoke, a White House official confirmed the vice president’s Chief of Staff Tina Flournoy would leave the administration, the latest in a series of aides who have left her team in recent months. News of her exit was first reported by the Washington Post.

Flournoy, the highest-ranking official to leave amid the staff shake-up in Harris’ office, will be replaced by Lorraine Voles, who has advised the vice president since last summer, the official said. Voles served as communications director to former Vice President Al Gore and as an advisor to Hillary Clinton in 2008.

The vice president earlier spent the week in Los Angeles with Second Gentleman Doug Emhoff at their Brentwood home. She visited the Vandenberg Space Force Base on Monday before speaking at an L.A. fundraiser, her second such event in the last two weeks. She will spend the weekend in L.A. before returning to Washington, D.C., on Monday.