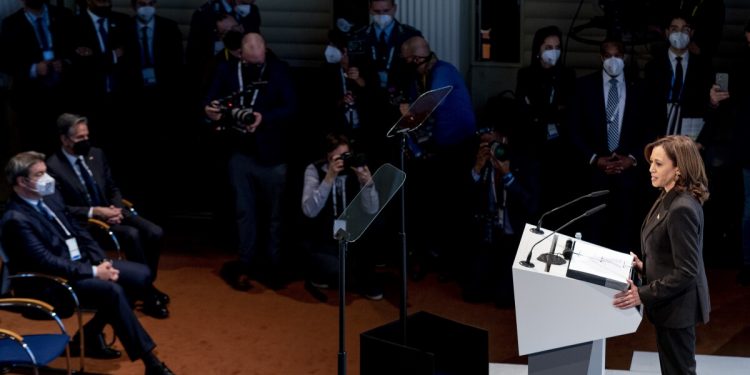 Concluding three days of meetings with European allies, Vice President Kamala Harris on Sunday emphasized unity and solidarity and a commitment to Ukraine as Russian troops appear poised to invade.

But she stopped short of making any new concessions to Ukraine’s President Volodymyr Zelensky a day after his fiery speech at the Munich Security Conference calling on allies to do more to help his nation avoid — and potentially defend itself from — a Russian attack.

“Let us recognize the position he’s in: his country is virtually surrounded by Russian troops,” Harris said during a 16-minute question and answer session with reporters at her hotel here. “He came here make a very clear point that he does not stand alone. In fact, I told him in our meeting, the United States stands with you.”

Harris, however, would not commit the U.S. to delivering additional defense aid to Ukraine, as Zelensky requested during a meeting with her Sunday.

“Depending on what happens in the coming days, we will reevaluate the need that Ukraine has and our ability to support,” she said.

Harris also avoided commenting further on Zelensky’s impassioned statement declaring his intention to seek membership in the North Atlantic Treaty Organization, which Russian President Vladimir Putin has tried to forestall with the threat of war by amassing more than 150,000 troops all around Ukraine’s borders.

Asked whether Zelensky’s repeated push to join NATO and his firm refusal to give Putin what he demands leaves even less room for a diplomatic resolution to the crisis, she demurred. “I’m not going to second guess president Zelensky’s desires for his own country,” she said, adding that NATO membership “is a process,” one that “doesn’t happen overnight” and is a matter for all 30 countries in the alliance to decide.

While Kyiv is still a long way from qualifying for membership, the U.S. and NATO have rejected Putin’s demand that they promise not to admit Ukraine to the organization.

Harris also held firm on the administration’s use of the threat of economic sanctions as a deterrent against Russia. Zelensky has urged the West to levy sanctions before a potential invasion, suggesting that doing so after tanks cross his border won’t do his country much good.

The U.S. sincerely hopes for “a diplomatic path out of this moment,” Harris said, even as she reiterated dire warnings from the White House that “We are talking about the real possibility of war in Europe.”

She also acknowledged that Americans could see higher energy costs if war breaks out, as President Biden has warned.

Meanwhile, in another ominous sign, Belarus Defense Minister Viktor Khrenin said Sunday that joint military exercises, involving about 30,000 Russian troops gathered near Ukraine’s norther border for the past 10 days would continue beyond their scheduled end date of Sunday, according to Reuters and other media. The force represents a significant portion of the estimated 150,000 troops positioned for a potential invasion.

“As the President has said, we believe that Putin has made his decision,” she said. “Period.”

How COVID has caused car prices to soar