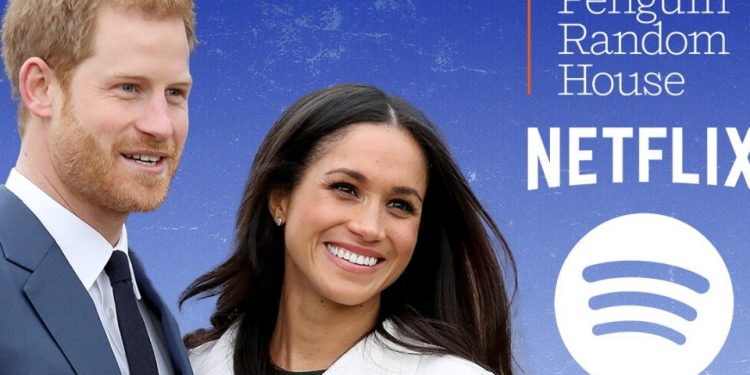 
Prince Harry and Meghan, Duchess of Sussex, have been busy forging a new life for themselves ever since they upped and left the British royal family two years ago.

Settling in sunny California, the couple founded Archewell in October 2020 and welcomed their second child, a daughter, the following June.

Archewell is the parent organisation of the couple’s non-profit foundation, audio studio and production company.

You could say it’s where the magic happens, as Harry and Meghan have now inked several exclusive deals with some of the world’s biggest platforms.

In this particular fairy tale, the Duke and Duchess of Sussex are very much in charge of the narrative.

Harry and Meghan are sticking to their exclusive multi-year deal with Spotify after the couple expressed their “concerns” over the streamer’s handling of COVID-19 misinformation.

In January, Archewell revealed Harry and Meghan first contacted Spotify last April about “the all-too-real consequences of COVID-19 misinformation on its platform”.

The statement did not mention controversial American commentator Joe Rogan by name, but it was also in April that Rogan said healthy young people didn’t need to get vaccinated.

The Joe Rogan Experience is exclusively distributed by Spotify, resulting in prominent musicians like Neil Young and Joni Mitchell leaving the platform in protest.

In a statement to Variety on March 18, an Archewell spokesperson said they have been encouraged by “ongoing conversations” with Spotify executives about its misinformation policies and practices.

Archewell is moving forward with its first podcast series from Meghan, which is due for release this winter.

Since announcing the exclusive deal, reportedly worth $US25 million ($34 million) in late 2020, Archewell Audio has released one show.

The studio has also brought in the big guns in the form of Rebecca Sananes as head of audio.

In July, Penguin Random House announced it had scooped up the rights to publish Prince Harry’s memoir.

The news came three months after that Oprah Winfrey interview, in which the American host famously asked Meghan if she was “silent or silenced” by the monarchy.

Although the interview ripped the royals a new one, people close to Harry and Meghan say the prince’s memoir will be different.

Royal biographer Omid Scobie, whom the couple often speak through, said Harry is “going out of his way to make sure there isn’t material in there that can be seen as negative towards the Queen”.

“I think as much as the press want this to be a burn book and an attack on the institution, this is more just about his story and, of course, his story is so much more than just a few years of his life as the Duke of Sussex,” Mr Scobie told the Royally Obsessed podcast on March 10.

Prince Harry said he is writing his memoir not as the prince he was born to be but as the man he has become.

It will cover his lifetime in the public eye, including his military service and the joy he has found as a husband and father.

“I’m deeply grateful for the opportunity to share what I’ve learned over the course of my life so far and excited for people to read a first-hand account of my life that’s accurate and wholly truthful,” Harry said.

No specific release date has been announced yet, but the memoir will be published in late 2022.

An ‘ambitious slate’ on Netflix

Six months after pulling away from the royal family, Harry and Meghan announced their multi-year deal with streaming giant Netflix.

Netflix CEO Ted Sarandos described the deal as an “ambitious slate that reflects the values and causes they hold dear”.

Although Meghan may feature in some of these projects, a spokesperson said she has no plans to return to acting.

The duchess rose to fame in the series Suitsin which she last appeared in 2018.

It will be produced and launched in partnership with The Invictus Games Foundation, which Harry founded in 2014 to inspire and support wounded, injured and sick serving personnel and veterans.

The series will spotlight several Invictus Games competitors as they prepare for the delayed 2020 Hague games, now taking place next month due to the pandemic.

Meghan, meanwhile, announced in July that she is creating an animated series called Pearl.

It is described as a “family series that centres on the adventures of a 12-year-old girl, who is inspired by a variety of influential women from history”.

Projects aside, it remains to be seen if Harry and Meghan will return to the UK this year to celebrate the Queen’s 70-year reign.

Harry is set to miss his late grandfather’s memorial service in late March due to a legal battle with the government over funding his own private security on British soil.

How To Grow and Care For Philodendron Birkin

How To Grow and Care For Philodendron Birkin