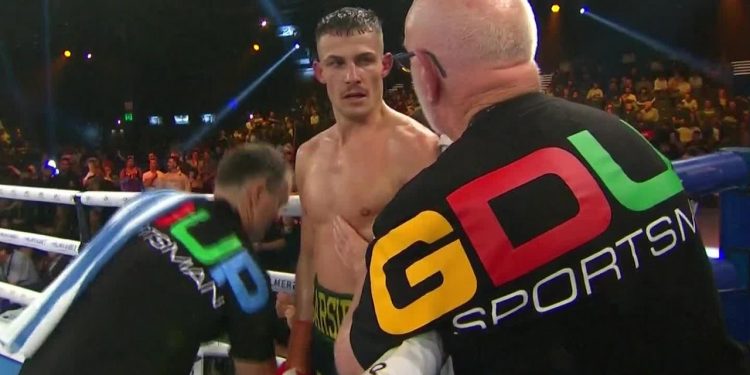 
It was described as a “boxing masterclass”, an “incredible” performance, as Harry Garside beat Manuer Matet in a unanimous points decision in Sydney on Wednesday night.

According to former world champion Barry Michael, Garside “never lost a round”.

Garside, well he labelled the 10-round epic as a “terrible performance”.

And while few were surprised by the entertaining and competitive fight, which saw the two throw one thousand punches between over half-an-hour of boxing, one thing caught everyone by surprise.

The decision by Garside, in just his second professional fight and first to last more than a single round, to stand up between rounds shocked everyone.

Not least because it was the first time Garside had been forced to fight more than three rounds, but because of the titanic battle the duo delivered.

As Main Event’s Ben Damon said, “It shows the conditioning that he has, you would expect nothing less given he’s got that man, the legendary Johnny Lewis (in his corner).”

Speaking after the fight, Garside revealed he never planned on sitting down between rounds because it did not replicate how they train.

“You never sit down when you spar, most boxers don’t, and I think when you sit down your mind tells you that you’re about to stop, so I’ve got to stand up, keep my legs moving.”

‘WHAT IS GOING ON?’: NRL star’s wife in ‘best women’s boxing match’ legend has seen

Garside came close to stopping Matet in the ninth when the Olympic bronze medallist pulled out a bombardment of shots as his opponent ran out of puff. Only the bell saved Matet.

Garside was not quite as impressed as some of the plaudits that were coming his way.

“I’m going to go back to the gym, watch that fight again and there’s always room for improvement.”

The stats showed that Garside dominated Matet, with the Olympian managing to make 141 head shots compared to 41.

Michael marvelled at Garside’s accuracy and his movement in the ring, as the talented lightweight’s ballet history showcased his excellent footwork.

“He just showed beautiful precision, timing, he’s like a ghost in there, he lands his punches and he’s gone.

“And he fought a very credible opponent, who is in superb condition as well, has got good reflexes, and he just basically took him apart. It was just incredible.

“I never thought he lost a round, I thought the scores were a bit closer than they should have been.”