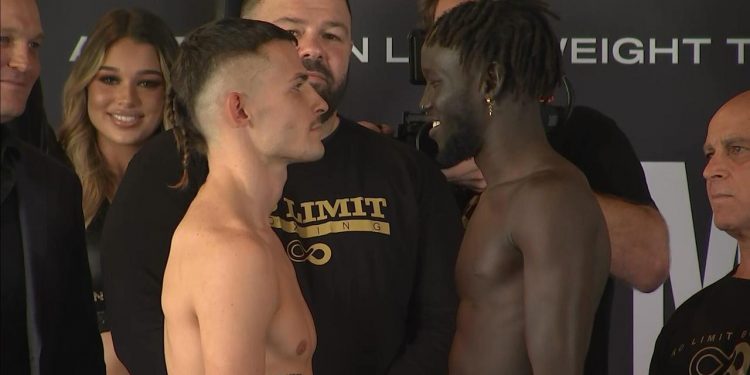 
Olympic bronze medallist Harry Garside and opponent Manuer Matet have both made weight ahead of Wednesday night’s highly-anticipated battle for the vacant Australian lightweight title.

24-year-old Garside (1-0) was all smiles as he weighed in at 61.02kg, almost three kilograms heavier than his rival Manuer Matet.

Sudanese-Australian Matet presents an extremely tricky test for the rising star in just his second professional fight, boasting a 4-1 record and weighing in at 58.26kg.

But Garside again defended his decision to take to the ring against the more experienced and dangerous Matet at the weigh-ins on Tuesday, declaring it would be ‘disrespectful to my family’ if he instead fought someone beneath his ability.

‘That’s why he’s not my coach’: Garside hits back at boxing legend after Fenech questions ‘brave’ call

‘He’s got everything, I’ve got nothing’: Incredible journey of refugee coming for Aussie star

Asked about the ‘risk’ of facing a tough opponent so early in his professional career, he replied: “I believe in myself and I know my team believes in me.

“I feel like it’s disrespectful to my family if I was fighting someone I was supposed to beat (easily).

An impressed Main Event’s Ben Damon could only conclude the interview by remarking: “Gee you’re a nice guy, Harry Garside.”

Garside – who weighed in wearing official clothes from his Tokyo 2020 Olympics campaign – steadfastly refuses to engage in trash-talk.

His opponent Matet didn’t hold back in their official press conference on Monday, unloading a barrage of words in Garside’s direction.

Matet doubled down after the press conference, telling Foxsports.com.au: “He said I’m a trash talker, but I’m going to back it up. I’m going to kill him, I’m going to knock him out.

“I’ve got everything, my background, my mentality and I can mix it up. I don’t think he can win it.”

But any hint of animosity was gone by the time they faced off at the weigh in on Tuesday.

Garside said of Matet’s trash talk: “It is what it is and boxing’s boxing. I actually know he’s a really good bloke. I know he’s just trying to sell the fight. That’s boxing.

“I know a lot of people in boxing do a lot of trash talk. But I know who I am and I know what I’m capable of. I don’t need to do that stuff, I just need to show my work.

“Win lose or draw, I’ll look myself in the mirror right now knowing I’ve done all the work. I’m proud of myself for that.

“I’ll get in there tomorrow night and I’ll do my job, I’ll win that fight and whatever’s next is next.”

Garside is not the only Olympian on the card, with 24-year-old professional debutant Paulo Aokuso weighing in at 79.28kg as he fights for the Australasian light heavyweight belt against Michael Van Nimwegen (11-7), who weighed in at 79.26kg.

Questioning The Merits Of Globalization

Questioning The Merits Of Globalization