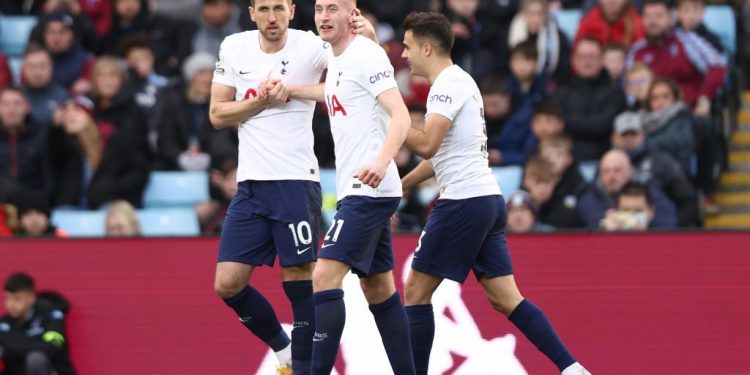 
Harry Kane has jetted to Georgia to be present for golf’s biggest day as The Masters is decided, but what is his handicap in the sport?

Hours after providing a two assists to teammates Son Heung-Min and Dejan Kulusevski in a 4-0 rout at Aston Villa, Harry Kane has jetted to Augusta for the final day of the Masters.

The England captain flew out after Spurs’ late game at Villa Park on Saturday evening, which helped cement their hopes of securing a top four finish in the Premier League and Champions League football next season.

Kane, a keen golfer, and NFL fan for that matter, was seen being interviewed by UK broadcaster Sky on the ground at Augusta.

But what is Harry Kane’s golf handicap? Is he any good as he makes an appearance at The Masters?

Despite his prowess on the pitch, Kane admitted on Sky that sometimes he does get nervous on the tee.

“When I’m on the first tee in front of a crowd, I get more nervous than when playing football,” he explained.

“When you see some of the holes and slopes and greens around this place, it shows just how good they are, making so many birdies and can’t wait to see it all.”

The striker also added that he was backing Australian Cameron Smith to come back from three shots down to defeat leader Scottie Scheffler.

Harry Kane’s golf handicap is 4, as per Golf Monthly in December 2021.

That is an extremely good rating, for essentially an amateur golfer.

Tottenham teammates Matt Doherty and Eric Dier are also known to hit the links with Kane.

After his jaunt to Augusta, Kane’s Tottenham are back in action at 12:30pm on Saturday afternoon, hosting Brighton and Hove Albion as Antonio Conte’s side look to extend the gap to top four rivals Arsenal, West Ham and Manchester United.

In other news, How the virtual safety car works in F1 and why it was introduced