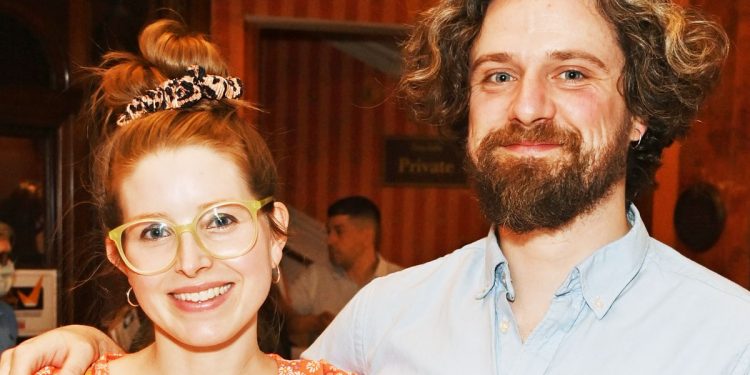 
Jessie Cave has given birth – making her a mum of four.

The Harry Potter star, 34, took to Instagram to share the happy news, and her little boy’s name.

Her fans and famous pals rushed to offer their congratulations, commenting on the adorable picture of her cradling her newborn and another of Alfie gazing lovingly at his son.

While one fan joked: “Congratulations! …Only 5 more babies to go.”

And another penned: “congrats guys on another beautiful tiny human”

Jessie’s pregnancy wasn’t without its drama, as the Lavender Brown star revealed earlier this month that she’d been rushed to hospital.

She told her fans at the time she felt like she’d been “hit by a tonne of bricks”.

She had become increasingly unwell after testing positive for Covid a few weeks earlier.

Sharing pictures from her hospital bed, she had asked her followers: “Triage, once again….Anyone else had covid in 3rd trimester and had it hit them like a tonne of bricks for weeks?

“Also – has anyone taken the anti-nausea drug and it made them feel worse?”

” Coronavirus followed by Norovirus on top of the near constant nausea this entire pregnancy.

“But I’m still managing to be a total ray of sunshine don’t worry,” she joked.

Jessie announced back in December that she was expecting her fourth child with comedian boyfriend Alfie.

They were already proud parents to Margot, four, Donnie, six, and Abraham, 13 months.

Abraham’s birth was also a trying time for the couple.

Jessie had woken up in intensive care before finally being allowed to go home to recover.

And when Abraham was just two months old, he tested positive for Covid and was taken to Chelsea & Westminster hospital.

Jessie posted at the time: “I watched the news about lockdown from an isolated room in hospital. Poor baby is covid positive.

“He’s okay and doing well but they are being vigilant and cautious, thankfully.”

Jessie and Alfie started dating in 2013 after meeting the previous year.

Their first date resulted in pregnancy, with Jessie later telling the The Sunday Times Style: “I came to the decision that I was very lucky to be having his baby, and that whatever he was going to say to me, I would be OK.

“Though something told me that our one night stand together was unique and beautiful – and deep down, being together one day already felt inevitable to be, even though I didn’t want to jinx it.”

Get Your Team Invested in Fair Housing: Real (Estate) Talk