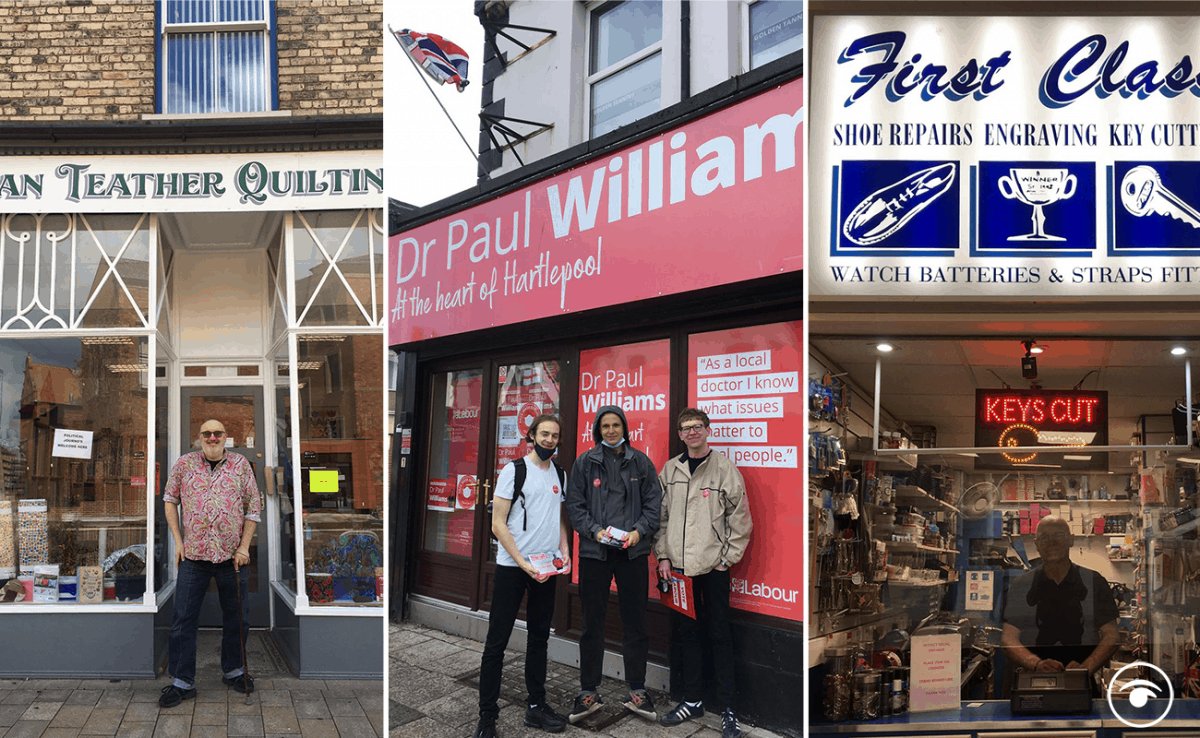 Hartlepool looks set to turn blue tomorrow after almost half a century in Labour hands.

Polling released ahead of the crucial by-election found that only around 40 per cent of the Labour party’s previous supporters have pledged allegiance to candidate, Dr Paul Williams – a former MP who lost his seat in neighbouring Stockton South in 2019. Not only that, Tory candidate Jill Mortimer, a farmer and barrister, is now a massive odds-on favourite with the bookies at 1/12. It’s something that will worry Labour leader Keir Starmer who is facing his first big test to win back traditional labour voters in ‘red wall’ seats.

We headed to Hartlepool today to see what was happening on the ground and immediately spotted a sign in a window saying, ‘political journos welcome’ near the local train station. The owner of the shop (and sign) was local man Alan Teather, a quilter and former army veteran. He told us he was voting for Dr Paul Williams in the by-election because he’s “red through and through.” However, he thinks Labour has “lost the town”, which “would be a shame”, but it could be “the kick up the backside they (Labour) need” to stop taking red wall seats for granted.

“But at the same time, if she gets (Tory candidate Jill Mortimer) in, she’s going to get some crap off the town. Because if she doesn’t bring jobs in within weeks, then Hartlepool will string her up like a monkey, figuratively speaking, of course,” he added.

“Brought the area up by his bootstraps”

Ironically Alan’s first vote (and last for the Conservatives) was for Margaret Thatcher at 18 on his mother’s advice. He’ll also be voting for Conservative candidate Ben Houchen as Tees Valley Mayor.

“He (Houchen) has brought the area up by his bootstraps. And he’s worked tirelessly for the area, and Hartlepool has benefitted from that with the free port and lots of other little bits as well. But for the mainstream Tories for the parliament, I wouldn’t trust them.” He explained.

Not quite red through and through, then, but It’s something we hear time and time again throughout the day.

We ask a group of Labour activists outside Dr Paul Williams’ HQ about the Houchen effect. Is he is a stepping stone for traditional Labour voters looking to move to the Conservatives? One of them chuckles as he calls him a “gateway drug”.

One of the young men is Owen Harding, 22, a history student originally from Bristol studying in Leeds. He’s just returned from canvassing in Hartlepool centre, which he said went “pretty good”.

“I think people know they’ve got a choice between a doctor, who’s been working in the constituency throughout the Covid pandemic, and someone from Thirsk who’s probably never even been here (Hartlepool) until she was announced as a candidate and lived in the Cayman Islands.”

“Not scared to speak her mind”

“She seems a nice sensible middle-aged lady with a level head on her shoulders who’s not scared to speak her mind – and I like that. And I think she deserves a chance.”

Bill, who was born in Glasgow but moved to the North East when he was 11, was brought up in a Conservative-voting family and said he’s unlikely to ever change who he votes for. We asked him why he thinks Hartlepool is on the brink of turning blue.

“I honestly think that people are more into their politics, and so they’re looking at other parties. And there’s a lot more on the news and television, and you can go online, so people are looking now. And I honestly think people in Hartlepool know they need a change for the town, and the only way they’re going to get it is to change the local MP,”

Labour member and student Ben Fazakerley, 21, from Sunderland, points out that the Tories are in charge and have been for over a decade.

“There is the message that people want a change, but it’s also worth thinking about where they’re directing that change. Are they talking about the local MP or a government that’s been in power for over ten years now and who pull strings in the end?”

People only vote Labour “because their parents did”

As we wandered around the shopping centre, we chatted with two local ladies on a bench who didn’t wish to be named. One of them told us she’s voted Conservative via postal vote, and the other, a former Labour voter, wasn’t bothering. Both women don’t like Boris Johnson, describing him as “some sort of comedy puppet” but claimed the only reason people voted Labour now is that their parents did.

Hartlepool has been a Labour stronghold since 1974. Labour MP Edward Leadbitter first held the seat from 1974 to 1992 before Peter Mandelson, a key figure in the New Labour movement, was parachuted in in the early 90s – before he had to step down when he became a European Commissioner.

Iain Wright (the MP; not the footballer) won the by-election in 2004, holding the seat until he quit in 2017. Most recently, Mike Hill had represented Hartlepool in the houses of parliament from 2017 until March 2021, when he resigned after facing sexual harassment and victimisation claims – which he denies – at the hearing in May.

Before running back to the train station, we struck up a conversation with Chris, 66, a military veteran sitting on a park bench in the rain with Susan, 63. Originally from Grangetown, an area close to Middlesbrough, the couple moved to Hartlepool in 2005. Chris told me he’s not interested in the by-election really. He’d voted via post but didn’t know who the candidates were or where they came from. “I think they’ve come from under a stone somewhere like all of the other leeches and beetles and bugs, so I’m not interested really,”

His partner Susan, who used to work in the canteen at the Smiths Dock (a local dockyard), told us she used to vote Labour but hasn’t bothered for the past few years. “Labour was good, then it went downhill, everything got spoilt, the buildings went, the works, the lot,”

It was a running theme throughout the day. A town that feels forgotten or ignored by political parties across the board. Chris had a suggestion on how politicians could re-connect with constituents of Hartlepool.

“What we need is people like yourself to get amongst the working-class and ask them straight out what they want. That’s how you find out how people tick.”

Related: London mayor elections 2021: All the candidates and what they stand for

SAE refines levels of automation in push for system clarity

Senators have reportedly reached a deal on infrastructure

Senators have reportedly reached a deal on infrastructure