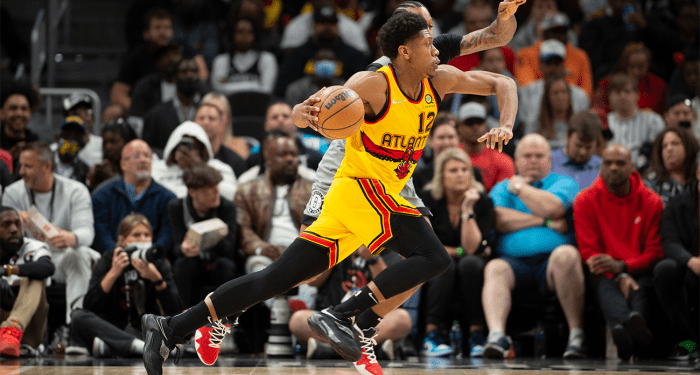 
The college basketball season came to a close Monday night and the eyes of the basketball world now shift back to the NBA.

The regular-season finale is Sunday and a whole lot remains up in the air with less than a week left in the season and only a handful of games still to be played.

In the Eastern Conference, the Raptors host the Hawks, winners of five games in a row. Both teams are fighting for playoff positions with Toronto on the right side of the play-in cutoff and Atlanta still on the outside looking in.

Out West, the Jazz return home after a brutal road stretch to face the Grizzlies. Memphis keeps finding ways to win without its star Ja Morant, who remains out with a knee injury. Meanwhile, Utah is sliding in the standings (sixth) as the playoffs approach despite having its stars healthy and available.

Check the Latest Odds and Lines at SI Sportsbook

Atlanta has won five games in a row and its last two came against two teams (Cleveland and Brooklyn) that it’s jockeying for position with in the Eastern Conference play-in tournament. The surging Hawks moved up to eighth place in the conference and get another crack at a team ahead of them in the standings (Toronto).

Sunday’s loss to the Heat ended Toronto’s five-game winning streak. The Raptors, for their stellar play over the last month, are firmly in sixth place in the East, clinging onto the final spot that would keep them out of the play-in game.

Atlanta has covered every game on its current win streak and seven of its last 10 overall. That stretch includes outright wins over the Nets, Warriors and Grizzlies. The Raptors lead the season series between these teams, 2-1, but the Hawks played the first game without Trae Young, a 106-100 loss, and won the most recent meeting convincingly, 127-100. Young had 41 points and 11 assists in that game, just another feather in his hat in a season full of offensive excellence and gaudy stats.

Young is too much for almost any defense to contain the way he’s playing right now. He just wrapped up a month of averaging a hair less than 30 ppg and better than 10 assists per game. I think he’ll be too much for Toronto once again, even though the Raptors have a strong defense. Plus, the 4.5 points is great insurance for a Hawks team that doesn’t always perform well on the road.

Two of the three meetings between these teams have gone over this figure this season. Toronto’s offense is playing like it can go blow-for-blow with Atlanta. Before their two most recent games, the Raptors scored 115-plus in four games in a row, including 131 against the Pacers. Toronto forward Pascal Siakam is playing phenomenal basketball. The team’s leading scorer just wrapped up his best scoring month (25.9 ppg). Atlanta has scored 120-plus in five straight games but the way it plays defense, it needs that many points to win. By the standard of Hawks games, this is a low total and the over seems like a safe enough bet.

Toronto’s awesome rookie forward has gone over this total in his last three games and four of his last five. In the month of March, he averaged 17.1 ppg on a season-high 14.3 shots per game. He’s steadily becoming a bigger staple of Nick Nurse’s offense as the season wears on. His outside shooting is still a weakness, though he drained a trio of threes against the Heat last time out. If he gets a few three-pointers to drop against Atlanta, he’ll easily clear this number.

The Grizzlies, sans Ja Morant, just keep winning. Friday’s win against Phoenix marked seven in a row and 11 of their last 12. Memphis maintains the No. 2 seed in the West, comfortably ahead of the Warriors but still well behind the Suns.

Utah is freefalling in the Western Conference playoff picture. The Jazz maintain their top-six standing, for now, but the Nuggets passed them for the No. 5 seed and seventh-place Minnesota is bearing down. Sunday’s loss to the Warriors marked Utah’s sixth loss in seven games—their only win during that stretch came against the Lakers.

Utah is crumbling at the worst imaginable time and Memphis is proving how well it can play without its young star. Picking the Grizzlies, who are 26-13 on the road, to cover a somewhat sizable spread in Salt Lake City is not a difficult choice. Memphis has the bigs to contain Rudy Gobert inside and pesky wing defenders to bother Donovan Mitchell on the perimeter.

The Grizzlies won both of the prior meetings between these teams behind 30-point games from Morant. They only won by one on the road all the way back in late November and then more convincingly, 119-109, at home in late January. Granted, Mitchell and Gobert didn’t play in the second game. Memphis is a next-man-up team and the next man up lately has been a revolving cast of Desmond Bane, Tyus Jones, Steven Adams—whoever it takes. I think, worst case, the Grizzlies keep it close, if they don’t win outright on the road.

This pick is a combination of confidence in the Grizzlies to get theirs against a Jazz defense that isn’t what it once was and a ding on Memphis’ defense. Sometimes, the Grizzlies hold a team like Milwaukee to 102 points but other times they allow lesser teams to keep pace with their offense, which leads to some high-scoring games. Utah should also rebound at home. Seven of their last eight games were on the road and one of those two wins in that time—and its best offensive performance—came at home. These two top-10 offenses are rarely held under 110 points, which puts us in the neighborhood of where they have to get to send this game over.

Gobert tallied 20 rebounds in his last game and has logged four consecutive games with 16 or more boards. Utah’s big man leads the league in rebounding at 14.7 per game and you’re getting a little bit of juice for him to hit his season average. Granted, Memphis is the best rebounding team in the league so Jaren Jackson Jr. and Adams will put up a fight down low, but with the pace the Grizzlies run at there will certainly be enough rebounding opportunities for Gobert to hit this figure.