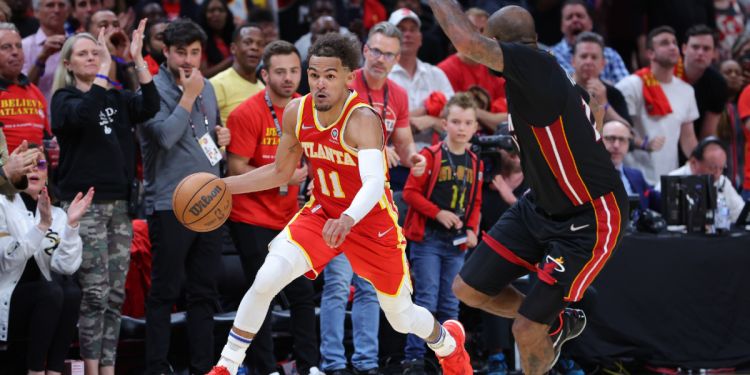 The Atlanta Hawks looked dead in the water as the Miami Heat had flipped a seven-point halftime deficit into a 16-point lead late in the third quarter of Friday’s Game 3. With Miami already up 2-0 in the series and the crowd inside State Farm Arena tranquilized by a 21-0 Heat run, Atlanta could’ve rolled over.

But that’s not how the Hawks do things. They’re far from a perfect team, but they believe in themselves, particularly in their ability to create offense through Trae Young, who played hero down the stretch of Atlanta’s thrilling 111-110 victory to cut Miami’s series lead to 2-1, hitting an extremely tough teardrop that proved to be a game-winner with 4.4 seconds to play.

First off: That’s a great decision by Hawks coach Nate McMillan not to call a timeout in that situation, and to instead let Young take the ball up the floor in the flow with the Heat defense in transition. Young scored 10 of his 24 points over the final 3:33 of game time, but even with that late surge, he was being bottled up by P.J. Tucker. If McMillan calls a timeout and lets Miami’s defense set, I don’t think Young gets that same kind of look.

Next point: Young gets the hero tag, but this required a total team effort for the Hawks to keep their season alive (yes, the season was over had they lost this game; no NBA team has ever come back from a 3-0 postseason deficit).

Let’s start with Bogdan Bogdanovic, who finished with 18 points and absolutely laced three 3-pointers in the fourth quarter. This is what got the crowd back into it and kept the Hawks in striking distance as Miami continued to score until Atlanta could string a few stops together.

Over the last two fourth quarters of this series, Bogdanovic has scored 28 points on 11-of-19 shooting, including 6-of-12 from 3. He didn’t play the first eight minutes of each half on Friday, and to me, that has to change in Game 4. That’s too long to be out with the Heat running off like they were in the third. Bogdanovic is the shooter Atlanta needs as Miami forces the ball out of Young’s hands. Get him in the game sooner and for more than 31 minutes.

The move could be to cut into Kevin Huerter’s minutes, though Huerter is a better defensive player than Bogi and if he’s shooting it well, those two can be interchangeable to a degree. If it’s not for Bogdanovic, Huerter could still lose some minutes to Delon Wright, who was a big part of the comeback on Friday as well.

Wright got a friendly bounce on a wing 3-pointer with the Hawks down 14 in the fourth, and that was the shot that really saved Atlanta as the Heat were about to run off again. And Wright’s defense is irreplaceable on this roster. With DeAndre Hunter, he gives Atlanta a fighting chance to defend on the perimeter.

Onyeka Okongwu, forced into the starting lineup after Clint Capela’s injury, was superb on Friday, too. He was Atlanta’s only hope on the boards and he outplayed Bam Adebayo on both ends throughout the decisive fourth quarter.

Okongwu finished with nine points, six rebounds, two blocks and a steal, and his impact was greater than that line would suggest. The Hawks outscored Miami by 19 points over Okongwu’s 24 minutes, and this offensive board and put-back, plus the foul, was perhaps the biggest bucket of the night short of Trae’s game-winner.

So the Hawks are back in the series … by a thread. If they don’t back up the effort with another win in Game 4, it won’t matter much. But for right now, Miami has its hands full again.