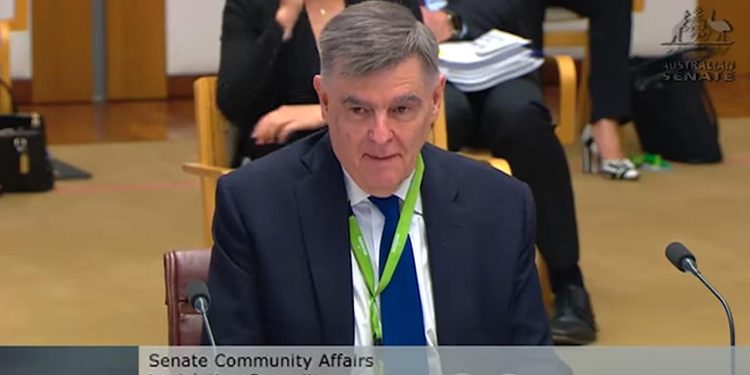 Australia’s top health bureaucrat has been slammed for being unable to answer a simple question in awkward scenes during Senate Estimates.

Australia’s top health bureaucrat has been slammed for refusing to provide a definition of the word “woman”.

Liberal Senator Alex Antic posed the question to Health Secretary Brendan Murphy during Senate Estimates on Wednesday, after last week failing to get a response from the Workplace Gender Equality Agency.

“Can someone please provide me with a definition of what a woman is?” he asked.

The question was met with uncomfortable silence.

Dr Murphy replied, “Look, I think there are a variety of definitions …”

Senator Antic suggested he provide “just a simple one”.

“I think perhaps to give a more fulsome answer we should take that on notice,” Dr Murphy continued.

“You’re going to take on notice the question of what a woman is?” the Senator said.

“I mean there are obviously biological definitions but there are definitions in terms of how people identify themselves, so we’re happy to provide our working definition on notice.”

Senator Antic said, “It’s not just that a woman was born a woman? This is hilarious. I’ve only been here two years, that’s the best thing I’ve seen thus far.”

The question “what is a woman” has been popularised by conservatives in the United States, who claim proponents of left-wing gender theory are unable to provide a simple answer.

According to the Oxford English Dictionarya woman is “an adult female human being”.

Matt Walsh from The Daily Wire has frequently posed the question during debates, including on a recent episode of Dr Phil featuring two transgender activists.

Walsh last month announced an upcoming book and documentary, both titled What is a Woman?about the issue.

“Can I provide a definition? No. I can’t. I’m not a biologist,” Judge Jackson replied.

Speaking to 2GB on Thursday, Senator Antic said it was “utterly ludicrous to suggest there isn’t a single definition”.

“That definition is an adult human female, a biological woman – why can’t they say it?” he said.

“I think people like Dr Murphy, I don’t want to put words in his mouth, but I wonder whether secretly he also thinks it’s ludicrous but he’s concerned about the backlash amongst the rank and file.”

Host Ben Fordham said he had a “feeling that five years ago, there would have been a very quick answer but these days people are afraid to answer that question”.

“In one sense you don’t want to attack the man. It’s more an issue of showing how far the insidious creep of radical gender theory has drifted through our institutions — it is endemic.”

Sky News host Rita Panahi slammed Dr Murphy for his “dumbfounded” response to a simple question “a child could answer”.

“These people have no qualms about imposing draconian restrictions like closing Australia’s borders, even to Australian citizens, to prevent the spread of a virus, but they are too scared to tell you what a woman is,” Panahi said on her Wednesday show.

“No longer can we pretend that the influence of this insidious radical gender theory is only evident in the UK and US. It has taken hold right here in Australia to such an extent that senior health bureaucrats are too terrified to answer that simple question, what is a woman.”

Last year, the outspoken critic of vaccine mandates was detained at Adelaide Airport and locked up in a quarantine hotel after refusing to disclose his vaccination status upon returning home to South Australia.

At the time, Scott Morrison revealed he was “surprised”, saying he believed the Senator was double-vaxxed and noting “he didn’t correct me”.

“I’m disappointed that that was unclear,” the Prime Minister said.

“And I’m glad that it’s been resolved. It was certainly my understanding that he’d been double vaccinated. And I had discussed vaccinations and made it very clear that that’s what I understood him to be, double vaccinated. So I was surprised [he was quarantined].”

Senator Antic has not since clarified his vaccination status.

FDA to Decide by June on Future of COVID Vaccines

FDA to Decide by June on Future of COVID Vaccines