With wintry weather adding to lockdown malaise, a ‘health tonic’ might seem like just what the doctor ordered.

Liquid tonics range from iron-based pick-me-ups that have been around for decades to modern herbal and vitamin-based products, but most promise a boost to your energy, immunity or general wellbeing.

‘Some people prefer a liquid [supplement] as they struggle to swallow pills,’ says Helen Bond, a dietitian based in Derbyshire.

‘There is also a popular opinion that they work faster than tablets, which may be true if you have digestive issues, but mainly there’s little difference.’

So how effective are these new tonics? Angela Dowden asked Helen Bond to assess a selection; we then rated them. 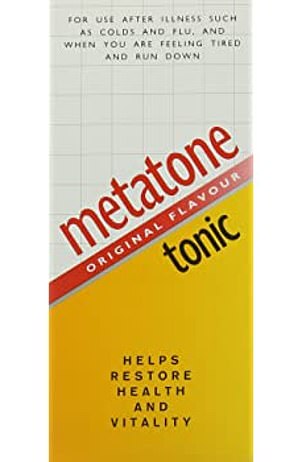 Claim: This orange-flavoured syrup is ‘for use after colds and flu, and when you are feeling tired and run down,’ says its maker. It contains vitamin B1 (thiamine), manganese, potassium, calcium and phosphorus and ‘helps restore health and vitality’.

Expert verdict: You need vitamin B1 to release energy from food, and for your heart, nervous system and mental health — but figures suggest most people get enough from their diets.

The maker recommends 10ml to 30ml per day, which at the top end supplies 3mg thiamin — more than the daily recommended intake (1.1mg), but not unsafe. Manganese also helps with energy release and healthy bones — this tonic meets your daily requirement. But its levels of calcium, potassium and phosphorus are insignificant.

If you’re low in energy because you’ve been off food, this may help, but a multi-vitamin would be better because you might be short of other nutrients, too.

On the downside a 30ml dose also supplies 10.5g or two-and-a-half teaspoons of sugar — more than a third of your daily recommended limit. This tonic also contains alcohol, to preserve the product — a 30ml dose has the same as a fifth of a small glass of wine. 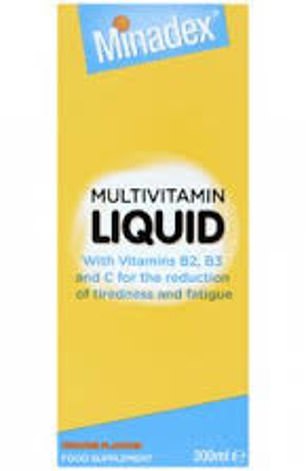 Claim: An orange-flavoured multivitamin syrup containing between 15 and 75 per cent (depending on the vitamin) of the recommended daily amount of the following in a 5ml dose: vitamins A, B2 (riboflavin), B3 (niacin), C, D, E; along with cod liver oil. This syrup is for ‘the reduction of tiredness and fatigue’.

Expert verdict: Vitamins B2, B3 and C can help with energy levels, but any balanced diet should provide enough.

We need vitamin A to see in low light and for the immune system, while vitamin D helps bones and immunity, but this has only half the daily vitamin D requirement (though 75 per cent of vitamin A needs).

Vitamin E (15 per cent of your daily needs here) is an antioxidant that helps protect cells from damage caused by harmful free radicals, molecules linked to cancer and age-related macular degeneration, a common cause of sight loss.

The cod liver oil provides only 15mg omega-3 fatty acids, compared with the 250mg a day we need for a healthy heart. One teaspoon dose gives you just under half a teaspoon of sugar.

A multivitamin with a wider range of nutrients, including folic acid, vitamin B12 and zinc, might prove a better all-round option. 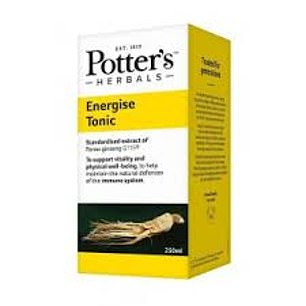 Claim: This liquid ‘supports vitality . . . and helps maintain the natural defences of the immune system’. The active ingredient is Panax ginseng (a root from north-east Asia).

Expert verdict: This contains a ginseng extract known as G115, which is standardised, meaning it has a guaranteed amount of active ingredients. The product claims are based on successful traditional use, rather than scientific research.

The G115 ginseng does have research behind it, including a small 2010 study in the journal Human Psychopharmacology that suggests it helped people feel calmer and improved mental arithmetic, though at a higher dose than here.

The antioxidant and anti-inflammatory properties in ginseng are thought to protect brain cells, which may help them function more efficiently. It is sweetened with sorbitol, which can cause diarrhoea, so take care if you have a sensitive stomach. 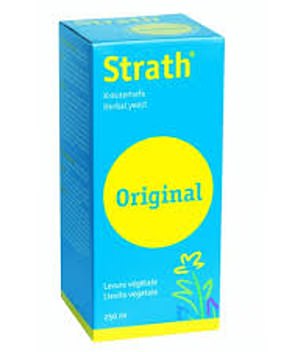 Claim: This ‘supports your immune system’ and contains ‘plasmolysed’ vitamin D-enriched herbal yeast, which incorporates nutrients from herb extracts, before being broken down so those nutrients are easily absorbed. The yeast is dispersed in honey, malt and orange juice.

Expert verdict: None of the nutrients meets recommended daily intake levels, but the manufacturer argues they are absorbed better than standard supplements, thanks to the enriched yeast. However, its evidence for this is largely based on lab studies, not humans.

The vitamin D in this means the manufacturer can claim it is immune-supportive, but the recommended three teaspoons a day only has 6 mcg vitamin D (we need 10mcg), so don’t rely on it as your sole source.

Strath has no added sugar, but the honey and orange juice mean it has nearly two teaspoons of sugar per daily 15ml dose. 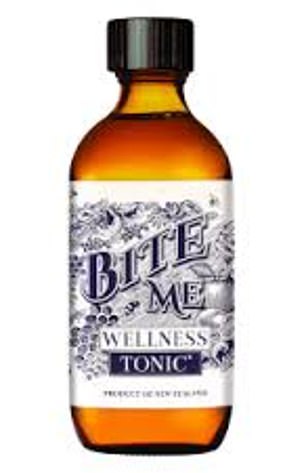 Claim: The label describes it as a wellness tonic — it contains apple cider vinegar, ginger, lemon and lime juice, turmeric and cayenne pepper — and is sweetened with manuka honey.

Expert verdict: The apple cider vinegar in this still includes a probiotic and the ‘mother’ (noticeable as a cloudy sediment — a combination of yeast and bacteria formed during the fermentation process), which together may boost the health of good gut bacteria that support the immune system.

Research from Iran, published in 2018, also suggested apple cider vinegar may be able to enhance weight loss achieved through reducing calories and exercising (possibly because it seems to reduce hunger, but evidence is limited).

Meanwhile, some studies suggest turmeric, ginger and cayenne may have anti-inflammatory effects. The antimicrobial qualities in manuka honey are said to help to fight bacteria that cause gum disease, but this has to be weighed against the negative points of enamel-eroding vinegar and sugar in the honey.

The manufacturer recommends 40ml, one to three times a day, which would be 9g or more than two teaspoons of sugar at the maximum dose. 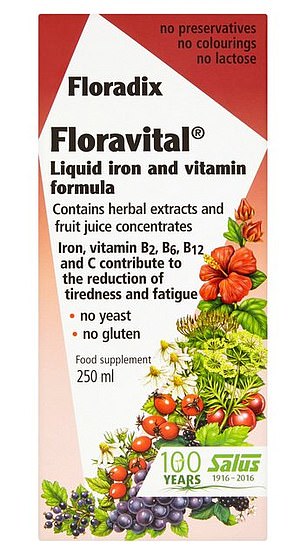 Claim: This liquid form of iron ‘contributes to the reduction of tiredness and fatigue’. It also contains vitamins B1, B2, B6, B12 and C, with herbs and fruit juice concentrates.

Expert verdict: Two teaspoons twice a day (20ml) provides your daily intake of iron in the form of ferrous gluconate, which is better absorbed and less likely to cause stomach irritation than ferrous sulphate (which is commonly found in pills).

The liquid also provides between 50 and 150 per cent of the recommended daily needs of several B vitamins, which are important for releasing energy from food and for healthy nerves — and 20 per cent of your daily vitamin C.

This tonic will only work if your tiredness is related to a lack of iron or these vitamins, however.

The herbal extracts (including hibiscus, nettle, fennel fruit and spinach leaf) may have mild anti-inflammatory effects but they have been included mainly for flavour. 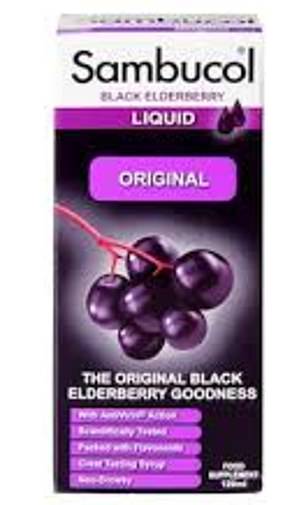 Claim: Made with black elderberries, this is ‘scientifically tested’ and ‘packed with flavonoids’, with ‘Antivirin action’, which limits the ability of viruses to infect healthy cells.

Expert verdict: A standard two-teaspoon (10ml) serving of this supplies 3.8g of black elderberry fruit, but the recommended daily dose in winter is four times this (40ml, with 15.2g black elderberry), since you may need a bigger boost.

A review published in 2020, in the journal Advances in Integrative Medicine, concluded that a higher 60ml dose can help reduce cold and flu symptoms. And a team at Kent Hospitals University NHS Foundation Trust has just received the go-ahead to test if Sambucol can have the same effect on Covid-19.

But seek medical advice before taking it if you do contract the virus, as it’s believed one of Sambucol’s modes of action is to increase the inflammatory cytokines that are a part of immune response, but which may also worsen Covid symptoms when their production gets out of control.

This is the most sugary of all the products featured. If you have the 40ml winter dose, it has a huge 28g of sugar — seven teaspoons’ worth, nearly your entire daily limit (30g).