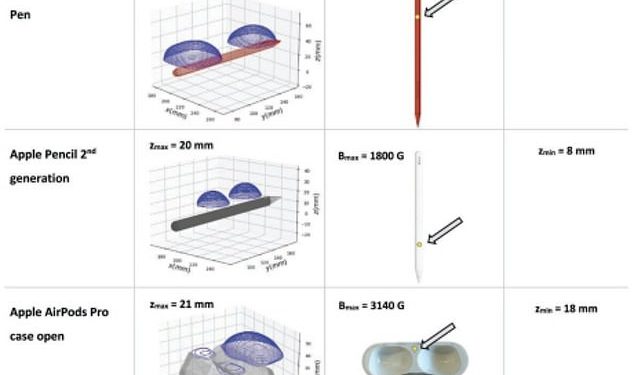 
Electronic gadgets made by Apple and Microsoft can interfere with life-saving heart devices, experts warned today.

Scientists are now urging all patients fitted with the pacemaker-like gadgets to make sure they don’t keep electronics in pockets near their chest.

The team said ‘any’ electrical device containing a magnet could theoretically pose a ‘danger’ to patients who rely on ICDs to jolt their heart back into rhythm.

Dr Sven Knecht, who was involved in the University of Basel study, said: ‘The public need to be aware of the potential risks of portable electronic devices.

‘These devices can cause a problem when carried in your shirt or jacket pocket in front of the chest, as well as when you are lying on the couch and resting the electronic device on your chest.’ 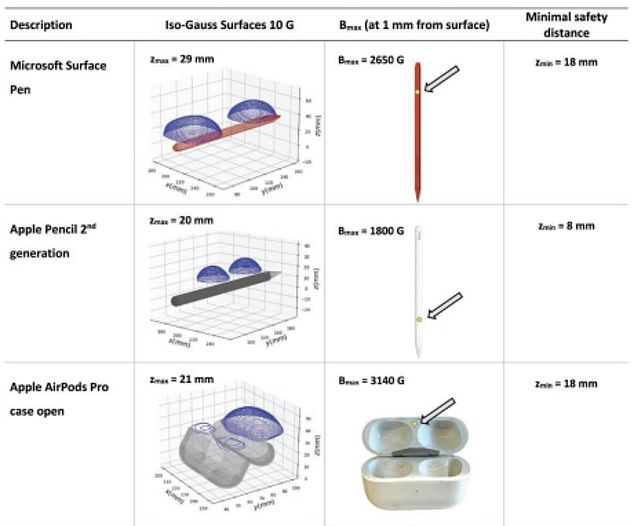 The above shows the magnetic fields of the Microsoft pen, Apple pencil and Apple Airpods studied (blue areas). The yellow dots represent the point where magnetism is strongest 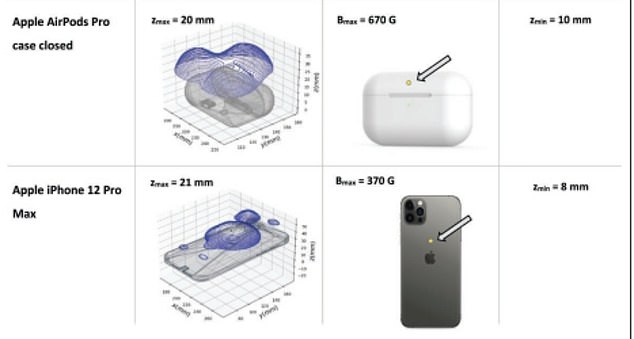 The above shows the magnetic fields of a closed Apple AirPod case and an iPhone 12 Pro Max. The yellow dots represent the point where magnetism is highest

ICDs work by emitting electrical pulses to maintain heart rhythm in people where it can be irregular — a condition known as arrhythmia.

They work in the same way to pacemakers by delivering low-level electric shocks to maintain a steady heartbeat.

But they can also deliver high-level shocks to help calm life-threatening arrhythmias, such as ones that can trigger a cardiac arrest.

Don’t put your iPhone 12 in your breast pocket if you have a pacemaker!

Apple’s flagship smartphone, the iPhone 12, can interfere with pacemakers and other medical devices, the company quietly confirmed in January.

The firm’s latest devices feature a technology called MagSafe, which uses in-built magnets to firmly attach accessories like wireless chargers and wallets to the back of the phones.

Apple has admitted that these magnets and electromagnetic fields might interfere with medical devices and should be kept at least six inches away.

The tech giant’s all-important update may be in response to a recent research paper that highlights the iPhone 12’s ability to ‘potentially inhibit lifesaving therapy in a patient’ with an implanted medical device.

This makes the iPhone 12 particularly dangerous if kept in the breast pocket of someone fitted with a pacemaker.

Researchers warned all electronic devices with magnets were likely to interfere with ICDs and pacemakers.

In the study, published in the journal of the American Heart Association, academics measured the magnetic fields of three devices.

The devices were placed at different safety distances, and ICDs — which weren’t attached to anyone — were monitored to see if they suffered interference.

Experiments were repeated five times to estimate the minimal safe distance of the electronic devices from the medical gadgets.

Results showed the Apple products could not be placed closer than 0.78inches, or 2cm, without interfering with ICDs.

Corentin Fery, one of the study authors, called for patients to be warned about the risks.

The team said magnets can activate a switch that prohibits ICDs from delivering life-saving shocks.

‘If you carry a portable electronic device close to your chest and have a history of tachycardia with an ICD, strong magnets in these devices could disable it,’ he said.

‘Heart patients should be aware of these risks, and their doctor should tell them to be careful with these electronic devices with magnets.

‘The main thing to remember is that any electronic device may be a danger, especially ones with a magnet inside.’

Charities have warned about the dangers that electrical devices pose to ICDs and pacemakers for years.

They are backed up by several studies, including one from last year that warned the Apple iPhone 12 could interfere with the medical gadgets.

The American Heart Association says all mobiles should be kept at least 6inch (15cm) away from pacemakers to minimise the risks.

Microsoft told MailOnline: ‘Surface Pen has been designed, tested and manufactured to comply with regulations in a number of countries, including the European Union.

‘We recommend customers follow previously published guidance’ which recommends the device is kept at least 6inch (15cm) from pacemakers and ICDs.

When MailOnline contacted Apple, a spokesperson directed us to their support page.