Heartbroken mom of Brooklyn shooting victim speaks through translator about ‘anxiety’ as son, 16, has serious surgery


THE heartbroken mother of a teenage victim of Tuesday’s Brooklyn subway shooting is speaking about her anxiety through a translator as her son has serious surgery.

The 16-year-old was one of a handful of teenage victims in the shooting, according to Governor Kathy Hochul.

Speaking outside of Maimonides Medical Center in Brooklyn on Tuesday evening, Hochul provided updates on the handful of pediatric patients she visited.

One victim, a 16-year-old, had hand surgery. Hochul said doctors were “able to restore life to his thumb” after he sustained injuries in the shooting.

He is expected to be discharged tomorrow, but has a long recovery ahead of him, Hochul said.

Hochul spoke with the boy’s mother through a translator. She is Chinese and was alone in the hospital. 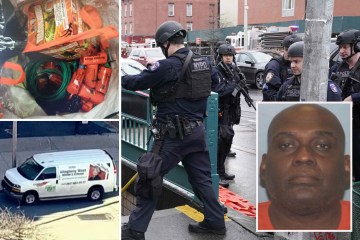 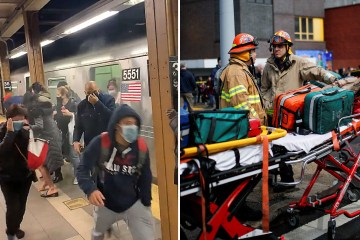 “All she has is her son,” Hochul said.

The mother conveyed her anxiety surrounding the situation through the translator. To add to her stress, she recently lost her job as a home health care aide.

“Let’s make sure she has one less thing to worry about,” Hochul said, putting a call out to anyone who may be looking to hire a health care aide.

Hochul said there were five patients who were treated at Maimonides ranging in age from 12 to 18.

She did note that the younger victims have been released, having been treated for smoke inhalation and not necessarily gunshot wounds.

Hochul spoke with the families of the 16-year-old and 18-year-old victims still in Maimonides during her visit.

Doctors at the medical center told her they’re “monitoring blood levels” to make sure no toxins got into the victims’ blood.

Many of the youngest victims were en route to school at the time of the shooting, she said.

While the investigation continues to unfold, authorities are looking into all possible motives as the search for the suspect continues.

“Certainly people do feel terrorized by this action,” Hochul said when asked if she believed this was a terror-related incident.

“In my heart, this is a terrorizing action to put fear in the hearts of New Yorkers. But they don’t know who they’re messing with.”

Hochul urged New Yorkers to be vigilant as authorities continue to search for a suspect but stressed that the subways are safe to ride.

Police have named Frank James a person of interest in the shooting. His whereabouts remain unknown.

Anyone with information or footage from the scene is urged to contact the NYPD at 800-577-TIPS.

The Ghost Of Tsushima Movie Lands Takashi Doscher As Writer

The Ghost Of Tsushima Movie Lands Takashi Doscher As Writer