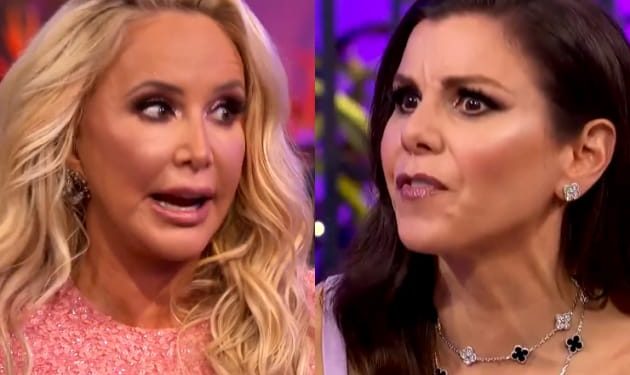 Season 16 of The Real Housewives of Orange County has been home to explosive conflicts between the cast members.


The Reunion special to this polarizing season shows no sign of slowing down.


As we can see in this Reunion trailer, things are off to a bumpy start for Shannon even before the cast takes a seat.


On the Reunion stage, Heather lashes out at Noella and also tells Shannon that she could have demolished her entire family.


Heather Dubrow, Shannon Beador, Gina Kirschenheiter, Emily Simpson, Dr. Jen Armstrong, and Noella Bergener are all there for teh Reunion.


The special, which will begin airing on April 20, is of course hosted by Andy Cohen.


Shannon appears to have some sort of trouble with her dress backstage, resulting in panic and tears before the crisis is averted.


Heather lays into Noella about the book that she gifted to Max.


“You’re very offended by the word pornography,” she accuses.


We also see Dr. Jen taking aim at Noella, though the context is not entirely clear.


“It’s like talking to a child that just makes stuff up,” she characterizes.


However, though Noella is a deeply polarizing (she has many fans!) member of the cast, she’s not the only one in the hot seat.


“You did too many ding-dong things this year,” she notes, “and now you’re coming to pay the piper.”


While it could be about Shannon’s apparent jealousy, well, Gina’s right — Shannon did too much clownery for us to know what this is about.


Heather goes after Shannon, also, referring to her erstwhile marriage to David Beador.


“I could of blown up your family,” she declares.


“I knew David was having an affair,” Heather explains.


“By the way, you knew David was having an affair,” Heather adds.


A flustered and unhappy Shannon replies that this is “Un-f–king-believable!”


It looks like this is not a particularly fun Reunion special for Shannon.


Not everything is tantrums and confrontations.


At one point, Dr. Jen says that so long as she is treated “like a dog,” she’s good.


We understand her meaning — she’s referring to decent people who pamper their pets — but it sounds goofy out loud.


Backstage, before the show, Emily (who looks amazing by the way) is grappling with a bloody nose.


Just her luck, she laments, stopping the bleeding and hoping that it can be resolved before they film.


The dress that they had ready for Shannon didn’t “work,” she tearfully complains over the phone.


Production goes into high gear to make sure that she has something to wear.


It’s not a very dignified moment for Shannon, who has struggled with body image issues, but they find her something … twenty minutes before filming begins.


The Reunion special begins airing on April 20, so we’re sure that plenty of viewers will be in a mindset to get extra enjoyment out of the special.


The rest of us don’t need any help getting a kick out of these glamorous disasters.