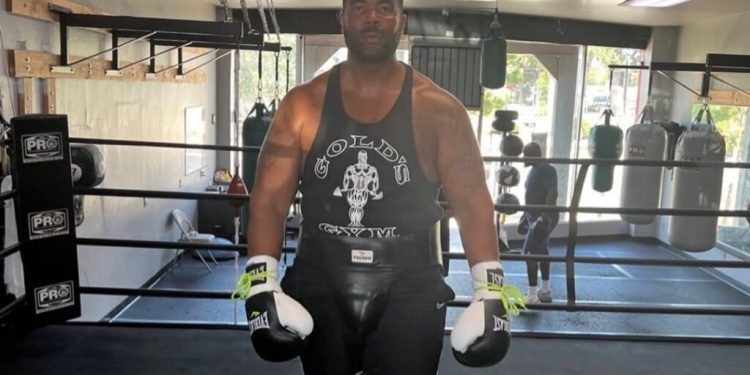 
I remember seeing on BoxRec, a heavyweight going down to Mexico and building up his record as he had 15 first-round KOs and wondering, “who is this?”

That would inevitably turn into 20 first-round knockouts.

That heavyweight was Christopher Lovejoy (20-1), a boxer who I now view as a top-ten most entertaining fighter in the sport of boxing. He started turning heads in boxing when he was ranked by the WBA in their top 15 of the heavyweight division in 2018, despite only fighting in regional Mexico shows. For the record, I have him at #10 and Jake Paul at #9 in terms of my current “must-see” boxers, as both bring a ton of entertainment value to anything they’re a part of.

Unlike popular content creators from Alex Jones’ InfoWars, NoJumper, Metro Skateboarding, or anything that forms a successful community on the internet, Lovejoy has connected with an audience through sheer interaction, goodwill, and being accessible. Lovejoy is just as much a media and content provider as he is a boxer, as his true calling is entertaining, which has come across in many of his Instagram feeds.

Eating McDonald’s without the bun to call it “Keto.”

Asking viewers while Charr is sweating so much at the press conference.

Going live with random fans, many of whom are strange, including one wielding a knife and licking it.

YouTube channel in which he works out and entertains.

Well, most pro fighters act like talking to the media or entertaining the fans is a consequence of throwing a paper airplane in 5th-period math class, but Lovejoy embraces it all and is surpassing a lot of fighters based on activity and being interesting.

The newest thing Lovejoy is focused on is being “The UK Assassin,” which he dubbed himself on Twitter and Instagram this weekend. His hit list includes Johnny Fisher (5-0, 4 KOs), Solomon Decares (4-0, 1 KO), and even going after the beloved folk hero of the U.K., Derek Chisora. Rather than protecting a record, Lovejoy is looking to get in the mix with these up-and-coming fighters, as a contract issue derailed a very interesting bout between himself and Dave Allen in a fight that I personally favored Lovejoy in.

You can riffle through his record and criticize it if you’d like. Still, Lovejoy won the fights and created a path unlike any other in recent memory, with the only comparable path being Devin Haney before he went to American Television. In fact, Lovejoy and Haney fought on the same cards when developing their records. Rather than flying opponents into America to fight, Lovejoy fought those opponents in Mexico and won each bout. There is something to that, which often gets left out. Looking at some of the current talent pool of heavyweights fighting at a developmental level, it is hard to believe it isn’t comparable to any other fighters’ road to the top.

CANT NOBODY IN BOXING DO WHAT I DID, I FOUGHT 12 FIGHTS AND SCORED 12 KOS IS 12 MONTHS, THESE DUDES BARELY GETTIN A FIGHT OR TWO A YEAR, WITH BIG TIME PEOPLE BEHIND THEM, AND FIGHTING BUMS

Lovejoy is an influencer, but an influencer in a community of South Central LA that doesn’t often have figures willing to be on the internet and seen by the general public, well, at least until now. Lovejoy has the business mind of a promoter, and the mouthpiece of a world-class prizefighter, with a compelling and interesting story to boot.

Lovejoy has created a community that all brands and businesses want to do, and seeing it evolve is fascinating and actually inspirational. If you look at Lovejoy’s amateur career, he shouldn’t be where he is. Rather than being a hater on the frontline, you should appreciate a fighter with limited, at best, amateur experience finding a way to stand out in a division that needs talent. Beyond that, boxing as a whole lacks personalities. Lovejoy found a way to make money when many talented fighters struggle to do just that, and when he fights, he brings a lot of entertainment to the ring.

Jake Paul has deboed the boxing game because most boxers at the highest level are either boring in the ring, outside of it, or the coup de gras when fighters are both. Lovejoy is more entertaining before a fight and even during a fight than a lot of top talents in the sport. When Lovejoy is on a card, he is often the topic of conversation, even when fighters with bigger accolades are on the cards. These figures bring interest to boxing and grow the sport, as we have had a slew of fighters over the last decade who have not been great ambassadors to grow the sport of boxing.

Lovejoy, who has been rumored to fight Trevor Bryan, Dave Allen, and a slew of other fighters, has made himself a topic of conversation over the past four years through expertly navigating the boxing world. Each bout is seemingly the most compelling professional fight card they would’ve been on. Add to the fact that Lovejoy sparred with Tyson Fury and Luis Ortiz, amongst other world champions; he is taking the prerequisites to get the most out of his career, as he is investing in traveling and getting the right looks.

IF LITTLE JOHNNY DONT WANT, WHO WANT IT? pic.twitter.com/F2IE8bzDO6

The question persisted, how good is Lovejoy really?

Honestly, does it matter?

Lovejoy’s true mastery is his willingness to interact with any and all media outlets, seeing the value in promotion, a flaw with most boxers who act as though interviews are punishment or a sign of weakness. Lovejoy is smart, very smart, and his ability to overachieve in the sport is a credit to his understanding of how media and content work, as well as just understanding patterns and systems and finding a fit for himself in this industry. His latest antics of targeting UK heavyweight prospects with huge fanbases, and the best fans in the sport, is yet another way for him to be in front of yet another audience who will inevitably become fond of him.

Lovejoy, who is still an active pro boxer, though inactive as of October 2021, has signed another pro boxer, DeAndre Savage, who was a super heavyweight at the Olympic Trials. Lovejoy is building something bigger than just a boxing career, as it looks like he is trying to enterprise his boxing notoriety into sustained businesses and incomes outside of living fight to fight.

To think it all began when he walked into the Wild Card Boxing Gym with no clue other than a solid self-belief that he could beat up any man and see if this could work as a career path. Lovejoy jumped into the deep end and got the better of a fighter at the gym, which sparked a fuse for Lovejoy to go all-in.

Not long after, Lovejoy would find himself in Las Vegas, Nevada, sparring with Michael Hunter and Frank Sanchez weekly. Lovejoy is grateful to these two fighters as they provided him an opportunity as many heavyweights are unwilling to spar and help others. Especially those learning on the job.

Oftentimes boxers have no vision but just to fight. That seemingly is what it takes to be great. Yet, what is so interesting about Lovejoy is his vision might outweigh his skill; in fact, I think it does, but no knock to him. Lovejoy is navigating the system he exists in to get the best result, and if more boxers did this, boxing would be more relevant.

Boxing, in general, is smoke and mirrors. A lot of fighters are not good; it is about standing out and creating interest. Honestly, who cares how good Lovejoy is? He is all in on what he does and has made something out of nothing, which is supposed to be the American dream in the industrial era. The 38-year-old pro boxer fought for a world title last May against Mahmoud Charr, in which he got stopped in the second round, his only career loss and his only fight that got outside of the first round. Still, in the end, Lovejoy earned a six-figure payday, and Charr left the fight with a ton of respect for Lovejoy. In fact, if you follow Lovejoy’s Instagram, you will see Charr often post a fire emoji on his feed – something you rarely see in the sport. He has earned respect from sharing the ring with another fighter.

Lovejoy is authentic in who he is and resonates with seemingly everyone who wants to be entertained in the sport. Lovejoy reminds me of a mid 90’s UFC-type guy, a true tough guy willing to fight anyone, not unlike those early pioneers of that sport.

Lovejoy is a hustler in the good sense of the word. He finds a marketplace and tries to maximize his revenue in this market. How many boxers minimize their value by being adversarial to any and all, or furthermore, just don’t try to do much beyond the fight—a ton. Lovejoy is a product of an environment rarely seen as candid or in real-time as we’re seeing him in the boxing world. The journey is much more interesting than many fighters with deep amateur pedigrees and generational accolades.

The truth of the matter is most fighters leave a lot on the table, especially money because they’re not well-rounded people; they’re obsessed with boxing greatness. Lovejoy found who he was first and then took to boxing second. Though this gives him a disadvantage in terms of his ceiling in historical greatness, Lovejoy has more of a sense of what he wants to do in the sport than most who are even world champions.

Beyond that, the violence of the inner-city of LA also made boxing seem amusing to him. The dangers of the streets are so real. A fist fight that is sanctioned almost feels like a welcomed change, a jarring change from most boxers who at the highest level seem stressed out and annoyed all the time. Lovejoy seems relaxed in a sport that seemingly should make you feel tense, nervous, and anxious.

Whether it is celebrating boxing, local shows, or what have you, the Christopher Lovejoy boxing story does not end with his boxing career, as it is about a person making an organic business from the ground up. Finding something positive and defining himself in that. Imagine if every fighter in the top ten pound-for-pound list had Lovejoy’s hustle? If that existed, we’d have a sport that was more widely watched by a broader audience, that is for sure.

In short, Lovejoy has connected with the fans in a way that many all-time great boxers in his generation have not, and more so, he is interesting. Lovejoy is a unique story and one I recommend fight fans follow; as evitable, he will get another notable fight and make the whole thing very entertaining to watch.

Sir Tom Jones is treated by doctors after collapsing in Budapest