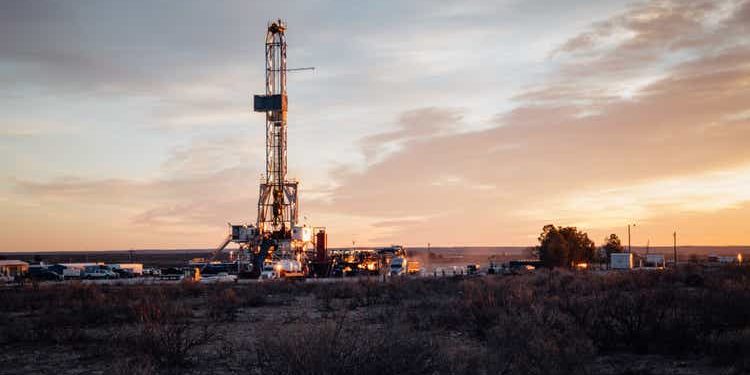 Helmerich & Payne (NYSE:HP) is a key player in the oil drilling industry, with a fleet of rigs across the world, and cutting-edge technology. The company has had some very trying times over the past decade. I used to hold a position in Helmerich & Payne until the 2015 oil price crash, which decimated the company’s business. But now, with oil above $100 again, I was curious to see if the business has regained ground. While the oil markets have changed, Helmerich & Payne has not, with the business still struggling due to E&P capital expenditures. Helmerich & Payne looks to be trading around fair value, but with so much uncertainty, I wouldn’t buy again.

The Past Five Years

Looking at the charts above show a wild ride for Helmerich & Payne since I last invested in pre-2015. The company has not seen any metric comeback to levels previously seen since the oil price drop in 2015. What happened after oil prices plummeted from $100 to $30 in 2015 was a very long and slow return to $100 in 2022. During this time, Helmerich & Payne saw a slight rebound in revenue from 2017 to 2019. In this period, the company escaped operating and net losses for a brief year. After that, the pandemic sunk oil prices to lows of less than $10. This price crash killed the momentum Helmerich & Payne had going in years prior. Revenue dropped to levels lower than the last period of declining oil prices. In turn, the operating and net losses also got worse. The issue that has arisen from the pandemic is the various bankruptcies in the E&P space and thus tighter capital expenditures thereafter.

This was seen in 2021, as Helmerich & Payne struggled with getting rigs active. And while this has been an issue since the oil price decline of 2015. But it is now a different environment, where oil prices were above the estimated breakeven for drilling companies of $50 for most of 2021. But E&P companies were simply out of money after trying to survive the pandemic to increase rig counts. This struggle to activate rigs can be seen in the company’s utilization rate, which was a record low of 42%. Helmerich & Payne have had bad results due to the economic factors, which over the long term has reduced utilization and, therefore, rig count. The rig count has dropped by 101 rigs since 2014, or 27%. Due to the lack of rigs needed by E&P companies, Helmerich & Payne has tried to expand their technologies and systems solutions which have grown but are not a real driver for company profits. Overall, the business has struggled with such variability in the oil market. More recently, the pandemic has hurt Helmerich & Payne’s customers’ ability to spend and lowered rig utilization rates.

But as high oil prices become the new norm, eventually, E&P companies will resume capital expenditures. This seems to be happening now in 2022. Revenue over the six months has increased by 62%, with average active rig count increasing by 41% from the average of 2021. But the issue is that Helmerich & Payne still only has a 60% utilization rate, and thus the company is still dealing with operating and net losses. If the trend continues, we could see some good results in the next two quarters and maybe even the start of profitability.

Throughout all the struggle, the company has maintained a phenomenal balance sheet to withstand the environment. As of the most recent quarter, Helmerich & Payne had high liquidity and low leverage. The current and quick ratios are 2.43x and 2.21x, showing the business can pay any immediate debts twice over. The company also has low leverage with a debt-to-equity of 0.63x. This is impressive as the company has struggled with profits and operating income for years but can maintain a high-quality balance sheet.

As of writing, Helmerich & Payne trades around the $40 price level. At this level, the company has a P/BV of 1.56x. It is hard to value this company with earnings potential as it has been so long since the business has been able to generate consistent profits. The estimate is for 2023 EPS to be $2.13, which would mean an 18.78x forward P/E. I have my doubts about the fruition of long-term profits due to the factors causing the high oil prices have been the Ukraine war. Overall, I think the company is fair to slightly overvalued due to the many uncertainties this industry has.

Helmerich & Payne has had a terrible ride over the past decade. Coming of the 2015 oil price crash and then into the pandemic, 2022 finally shows some pickup in rigs activation. But even so, I am weary of the future for the company, as oil prices are held high due to war, and E&P still struggles with capital expenditure. It is for these reasons I am uninterested in an investment again in this company.