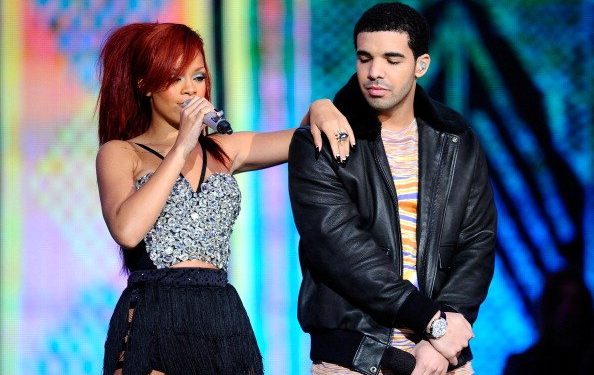 
Last week, Rihanna announced that she is expecting a baby with her boyfriend ASAP Rocky and it sent fans wild.

The singer was  spotted with a baby bump whilst walking through New York with the rapper.

She wore a long pink coat which was open at the front, exposing her growing bump which was covered in jewels.

Following the announcement, talk has turned to her relationship with Canadian singer Drake as everyone is revisiting her former love life.

How long did Rihanna and Drake date for? Read on to find out…

Drake and Rihanna were linked in 2009

The pair were romantically linked for a few months over a decade ago in 2009. However, they never actually made the relationship official.

As per Billboard, they met when Rihanna was shooting the Pon De Replay music video at a restaurant in Toronto.

Shortly after Rihanna split from Chris Brown in 2009, she was spotted with Drake at a restaurant called Lucky Strike in New York City and sources told Page Six she was “making out with him all night”.

However, Rihanna always denied that there was ever a romance, and in his 2010 song Fireworks, Drake hinted that his feelings for her were far stronger than her feelings for him.

Then, in an interview with the New York Times in June 2010, Drake said he was a “pawn” and admitted that he felt used by her.

After that, they rekindled their friendship and continued to spark romance speculation throughout the 2010s when they were seen together, but nothing was ever official.

They reunited at the 2016 MTV Awards

Drake and Rihanna remained friends and he famously presented her with the Michael Jackson Vanguard award at the 2016 MTV Music Awards.

The One Dance singer took the opportunity to commend the singer and confess his ongoing love for her.

“She’s someone I’ve been in love with since I was 22 years old. She’s one of my best friends in the world. All of my adult life I’ve looked up to her even though she’s younger than me. She’s a living, breathing legend in our industry,” he said.

“This woman has surpassed all competition while still being the same girl from Barbados, surrounded by the same friends, speaking with the same accent and never missing a crop over,” he added.

Now they’re not friends at all

Everyone thought Drake’s MTV speech was a lovely moment between the pair but it’s seemingly what led to the downfall in their friendship.

Speaking to Vogue on May 3rd 2018, Rihanna revealed that Drake’s speech two years earlier made her feel “uncomfortable” and said she didn’t like being “put on blast”.

She then exposed that the pair are no longer friends, saying: “We don’t have a friendship now, but we’re not enemies either. It is what it is.”

Not long after, Drake unfollowed Rihanna on Instagram, confirming to the world that they are no longer friends, and he has never followed again since.