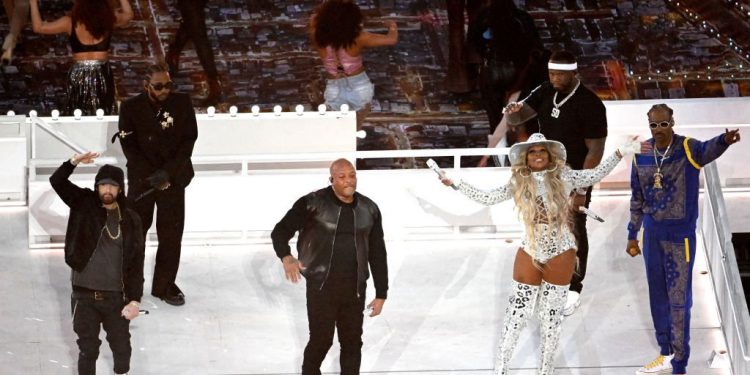 
Sunday evening was made spectacular with several artists coming together to perform at the Super Bowl 2022. But how much did the entire halftime show cost?

Dr. Dre, Kendrick Lamar, Eminem, Snoop Dogg, and Mary J. Blige took the stage to perform at the event. While some of them happened to be turned into memes, overall, fans loved every aspect of the event.

How much did the halftime show cost?

As per Fox News Australia, Dr. Dre dropped around $AUD9.8m for the performance. This is close to USD $7 million. Dre and Snoop Dogg were the first ones to kick off the show.

The duo definitely set the stage on fire with their performance. Following this, Mary, Kendrick Lamar, and Eminem joined. Fans were quick to react to the performance on social media.

Did the artists get paid for the event?

Every year several artists come and perform during the Super Bowl halftime event. However, none of them are ever paid to perform. In fact, NFL Spokesperson Joanna Hunter confirmed this while talking to Forbes back in 2016.

Joanna said: “We do not pay the artists. We cover expenses and production costs.” This does not come as a surprise as most of the artists perform to get exposure.

As per Billboard, JLo and Shakira, who performed at the Super Bowl last year, saw 1,013% sales increase in the songs they performed during the event. With this in mind, it is not surprising that the artists chose to perform even though there is no fee.

How many people watched this year’s event?

As per Samba TV, which is the leading global provider of omniscreen advertising, 36 million US households watched the Super Bowl this year.

Cole Strain, Head of Measurement for Samba TV said: “In Q4 of 2021, every one of the top five television programs was an NFL game, and that momentum helped linear TV notch its first ratings increase since 2020.”

He continued: “We saw that same momentum and excitement for the NFL carry over to this year’s match-up between the Rams and the Bengals with the NFL continuing its ratings-winning streak gaining Super Bowl viewership year over year by 12%, reaching 36 million households.”

In other news, Inside Ashley Brown and Adrian Peterson’s relationship amid arrest reports

Windsor, Ontario mayor on how Canadian trucker protests are affecting his city

Windsor, Ontario mayor on how Canadian trucker protests are affecting his city