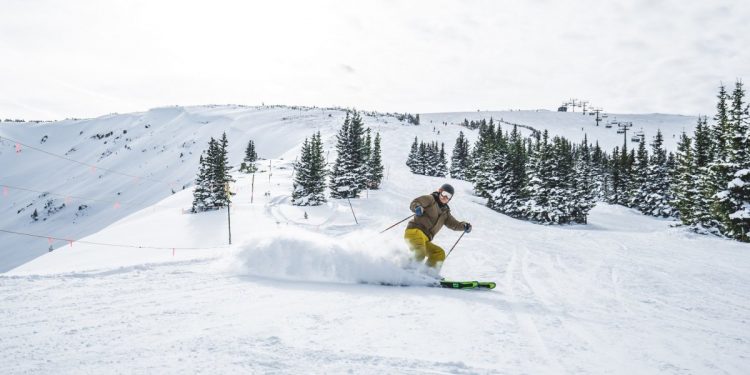 
The sun barely cracks the horizon as we approach Colorado’s Continental Divide via the most timeless and dramatic mode of transport—rail. The train we’re on has plenty of room to stretch out and any of us could’ve easily fallen into a comfortable slumber during an early morning roll through the Rockies, but no one wants to miss anything. Outside our dining car—where windows wrap halfway around the roof—we’ve been watching the front range suburbs give way to vast rock formations, wild moose, ghost depots, and eventually those majestic snow-capped peaks. Welcome aboard the Winter Park Express.

A dedicated weekend Amtrak train geared specifically for skiers and snowboarders, the Winter Park Express snakes some 4,000 vertical feet and 56 miles from Denver to the base of its namesake resort—Winter Park—with zero chance of Sunday traffic.

“We just pulled I-70 on our map app,” the conductor announced, “We’ve never seen this before. Instead of a red line, the traffic is just showing up as black.”

He gets a hearty chuckle from the passengers who are thankful not to be sitting in stop-and-go. The trip speaks to the romance of train travel in the mountainous West—chugging through the history, curves, peaks, and passes from the warm comfort of a rail car with a hot chocolate or cold Bloody Mary. The conductor and staff double as tour guides, adding color to the two-hour trip.

“Our train will go through 28 tunnels,” our conductor tells us, semi-warning that the last one is about six miles long. “It’s pretty dark in there, if you want to find your way back to your seat.”

We collect ourselves in the darkness, and as we enter the light again, there it is—the base of Winter Park, the longest continually operating ski resort in Colorado. We debark the train, gather our boards, and head out for our first gondola ride of the day—just a few hundred yards from the depot.

The first track to this region was built in the 1920s for the purpose of agriculture and logging. The Colorado Rocky Mountains became a hotbed of winter recreation, but it was a long drive from the towns. Boulder and Denver are just 35 and 50 miles away as the crow flies, but the snaking highway route is over 100 miles; thus the demand for the old Ski Train when the Denver Parks and Rec department developed the resort that they called “Denver’s winter park.”

The city opened the mountain in 1940 with the train bringing happy skiers right to the base. Today, it’s still technically owned by the city while operated by Alterra Mountain Co.—the Denver-based company that runs 14 other ski resorts in North America. Winter Park is the only one with direct rail service to the lift, with one-way train fares running between $29-$39. The train only runs on Friday, Saturday and Sunday, however, so if you return on a weekday you can hop a shuttle back to Denver.

Within a few minutes, we’re dressed and whisking up the gondola on a bluebird morning. Though there hasn’t been snow all week, the conditions are good and you can still find powder turns in the woods. We ride above the tree line, then cruise groomers and weave between evergreens. And while there are some Sunday lift lines, they aren’t proportionate to the number of people on the hill. Crowds are well dispersed across the 23 lifts, 166 trails on the two distinct mountains of Mary Jane and Winter Park—featuring “Seven Territories” across 3,060 feet of vertical rise. The 3,082 acres of terrain here makes Winter Park the fourth largest ski resort in Colorado. For those who want a backcountry challenge within the patrolled area, it also includes the Cirque Territory’s 400 acres of extreme ungroomed steeps, perched at over 12,000 feet.

Winter Park had 369 inches of snow in 2021. That’s more white than any other major Colorado resort, besting the cumulative average of 327. Storms tend to sit in the Frazier Valley and just dump. Snowmaking ensures that the mountain is open each year before Thanksgiving, and since rain in the spring is rare, spring skiing and riding are good through mid-May when the hills close. After that, Winter Park turns itself right over to mountain biking.

We ride in abundant sunshine and considerable warmth again before a winter storm approaches the Rockies, starting with a light snowfall. By afternoon, you can barely find a soul on the mountain. With most terrain open, all the lifts running until four o’clock, and the snow continuing to fall, Winter Park becomes an empty wonderland. By mid-afternoon, we’re totally gassed.

Winter Park’s ski village is sleepy at night and we opted for early dinners. The town of Winter Park itself, a short shuttle ride away, has plenty of restaurants, breweries, galleries, and shops that stay open later.

While lift tickets are comparable to most of Colorado’s big resorts at $150-$200 a day (booking early saves a few bucks), everything else at Winter Park is moderately priced. You can easily find a hearty dinner for $20 and lodging rates are reasonable. Overall, there’s less glitz and pretense than some of the Summit County spots, with the primary focus here being the hill itself. There are dedicated pass holders who park at the Mary Jane base and don’t step foot in the Village at Winter Park all season.

The snow continues to fall as we dine at Dunbar, an excellent Nepalese and Indian restaurant at Cooper Creek Square in Winter Park proper. The following morning, the valley has a few inches of powder and the sun again lights a perfectly clear sky. Soon enough, we’re back on the hill with a fresh supply of untracked runs all to ourselves—exploring Parsenn’s Bowl in the early morning and laughing like kids on a snow day. Deep in Colorado’s alpine adventureland, Winter Park clearly hasn’t lost its enduring edge.

Not quite so highbrow now – the art of brows

What Is a Breast Cancer Pathology Report?

When you find out that...

Monkeypox not a global emergency ‘at this stage’

FDA: Pfizer, Moderna vaccines for kids under 6 are safe, effective