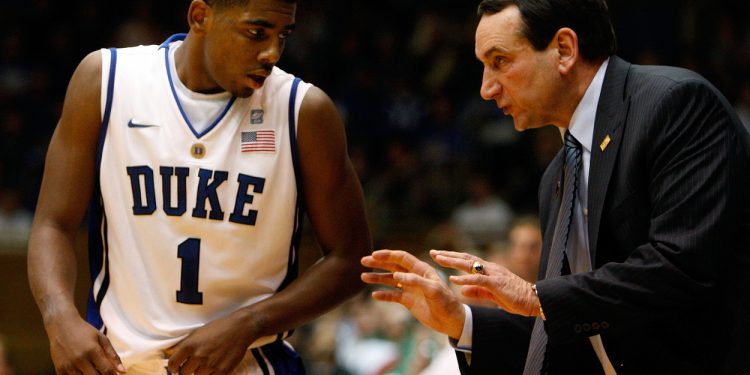 
Saturday night, Mike Krzyzewski will lead the Duke Blue Devils out onto the court for what might be the final time. Duke is taking on its arch-rival North Carolina in the Final Four of the NCAA Tournament.

With two more wins, Coach K would add a sixth championship to his decorated resume. But even without an additional title, the Blue Devils’ boss is one of the best coaches in basketball history, college or pros.

Krzyzewski’s program has produced a number of star players who graduated from Duke to the NBA. One of them is Kyrie Irving, who recently pulled back the curtain and shared what some of us might not have known about Coach K.

Kyrie Irving spent one season under Mike Krzyzewski at Duke

In the spring of 2010, Coach K and the Blue Devils won their fourth national title. That fall, they’d be welcoming in one of the top recruits in the nation to keep their championship momentum going.

Irving, a New Jersey native, committed to Duke in Oct. 2009. Once he arrived a year later, he immediately showcased his superstar potential and helped the Blue Devils get out to an 8-0 start. However, thanks to a significant toe injury, Kyrie was knocked out of commission after those eight games.

While Coach K originally feared that his new point guard would miss the season, Irving returned during the first round of the NCAA Tournament. Coming off the bench, Kyrie helped the one-seed Duke beat Hampton and Michigan. However, despite a valiant 28-point effort from Irving, Duke’s repeat bid ended with a Sweet 16 loss to Arizona.

Irving only managed to play 11 games over his entire collegiate career, averaging 17.5 points and 4.3 assists. However, that didn’t stop the Cleveland Cavaliers from selecting him first overall in the 2011 NBA Draft.

Irving explained what Coach K means to him

As he puts the finishing touches on a controversial 11th season in the NBA, the 30-year-old was asked to share his thoughts about Coach K. The Brooklyn Nets star then dove into a 90-second monologue about Krzyzewski, his legacy, and the impact the coach made on him and countless others, much of which came off the court (h/t: SNY Nets).

“Coach’s legacy on the game is really defined on all of the lives he’s impacted and, most importantly, the way he takes care of his family. … There aren’t too many off-days I see Coach K taking. Whether that’s being in the community helping out or being there in the locker room and being there for guys on-court and off-court. So he’s going to continue to build it but his years being in this culture, this game, he’s impacted so many lives. And I’m just grateful that I get to be one of those guys to talk about it over here [in the NBA] because he’s more than just a coach to me and countless others.”

Irving then shared some of the details about his first meeting with Coach K and how the Duke legend sold the program to him and his family.

“When he first recruited me when I was 16, 17 years old, I thought the guy was brilliant but a little crazy,” Irving continued. “The way he approached things and how he got guys to buy in at the time. I was just an egotistical little kid at St. Patrick High School in Elizabeth, and he comes into my house and makes everybody smile. I thought, ‘This guy’s either gotta be crazy or incredibly, incredibly charming.’ And he was both. But that’s what I needed from a competitive coach to really get the best out of me.”

Over his 42 years at Duke, Krzyzewski has seen some remarkable talents pass through his program. Many of them have gone on to have terrific, All-Star-caliber careers in the NBA, from Grant Hill to Jayson Tatum.

Kyrie is one of those All-Star players who wore the Duke uniform. And to no surprise, Coach K realized he was bound for greatness very early on.

In 2011, a rookie Irving spoke to ESPN about his decision to be one-and-done in Durham, NC. Bear in mind, he was only one of 39 players since 2006 to get drafted after one season in college.

“I’m only 19 years old and I was fortunate and blessed enough to be the No. 1 pick. It’s not going to stop recruiters from recruiting. It didn’t stop Coach K from recruiting me,” Irving said. “Coach K told me I was a pro right out of high school. … Hearing that from a great coach, it still didn’t keep him away from recruiting me. He knew that I wanted to go to college and be a part of a great program. It all depends on the kid.”

Today, Irving is a seven-time All-Star, three-time All-NBA selection, and a Rookie of the Year recipient. He’s also an NBA champion, hitting one of the biggest shots in Finals history in Cleveland’s dramatic seven-game victory over the Golden State Warriors in 2016.

Coach K has watched from afar as many of his former players went on to achieve huge success in the pros. You can expect all of those players to do the same when they watch the legendary coach lead his Duke squad one last time.

All statistics courtesy of Sports Reference and Basketball Reference.

RELATED: Coach K Is Using a Lesson from the Dream Team to Prepare for Duke’s Final Four Date With UNC