Premier Doug Ford ended his holdout and agreed to join the federal government’s national daycare program, putting Ontario on a path to $10-a-day daycare like the rest of the country.

“From day one, I said our government wouldn’t sign a deal that didn’t work for Ontario parents,” Ford said in a statement, seven months after Nova Scotia became the first province to sign up. “Given how complex Ontario’s child-care system is, we wanted to get this right. Today, we’re delivering a deal that will keep money in the pockets of hard-working parents.”

Prime Minister Justin Trudeau’s government will provide Ontario with $13.2 billion over six years to bring the average cost of child care down to the federal government’s target of $10 per day by 2025, both leaders announced at a press conference on March 28.

Ontario was the last province to sign, a surprise, given Toronto is home to some of the most expensive daycare costs in the country and inflation had emerged as a potent political issue. Conservative governments in Alberta, Saskatchewan, Manitoba, and New Brunswick all joined, amid a broad consensus among economists that affordable daycare can be a powerful engine for economic growth because it frees up parents to better participate in the labour force. 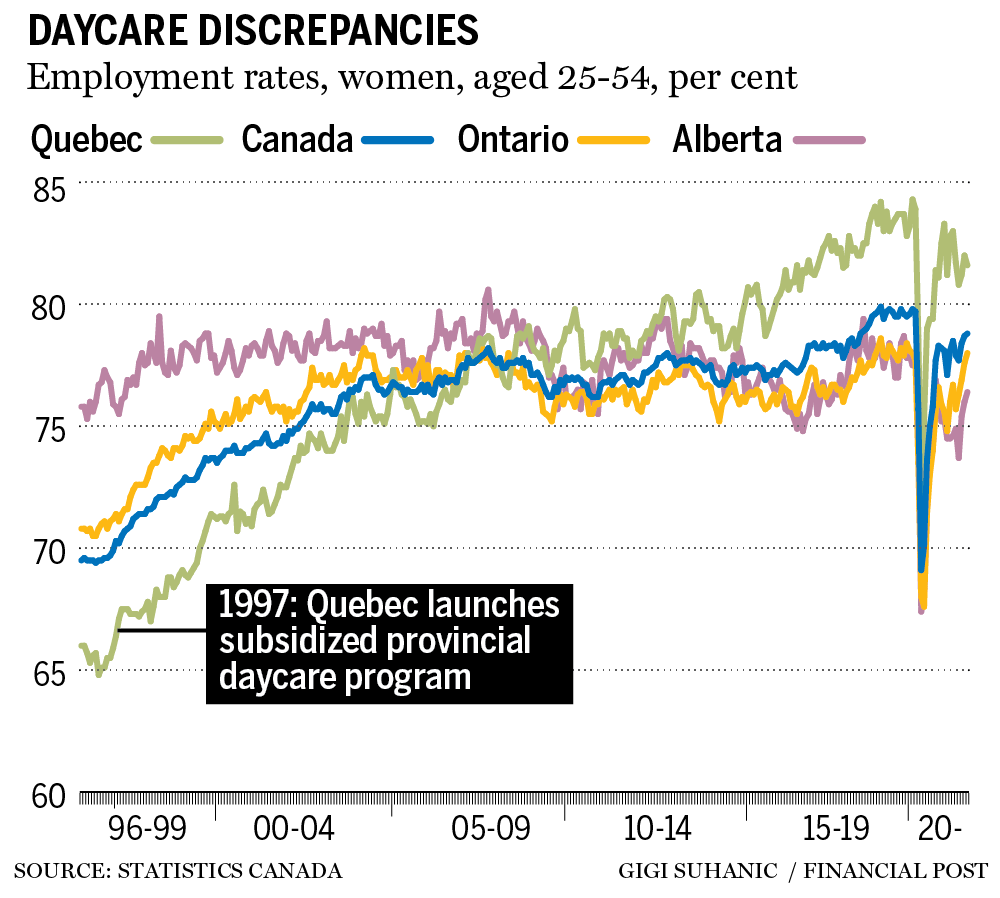 Cheaper daycare couldn’t come at a better time. With inflation running at a three-decade high and inputs becoming more expensive, businesses and consumers are feeling their wallets stretch. Women, who stand to benefit the most from a comprehensive child-care subsidy, need government support to create the right conditions that would support their search or return to work, said Armine Yalnizyan, a labour economist and Atkinson Fellow on the future of work.

The deal will take effect in May, starting with an average of 25-per-cent reduction in child-care fees and another 25-per-cent reduction by December, eventually reaching an average of $10 a day. In two years, families will collectively save $1.1 billion, according to the Ontario government. The province and Ottawa said it will support compensation and hiring for registered early childhood educators.

Federal and provincial leaders said the agreement will create more than 86,000 new daycare spaces for children by 2026 and Ottawa will continue providing $2.9 billion after the five years are up.

Ontario is scheduled to hold an election this spring, and that likely factored into Ford’s timing. For Trudeau, the daycare agreement stands as his signature policy achievement. The last Liberal prime minister, Paul Martin, was close to securing a similar program, but failed to pin it down before the 2006 election. Martin lost that vote to Stephen Harper, who scrapped the plan, even though provinces had signed on.

“We know the economic growth that is unlocked when moms no longer have to choose between having a family or advancing their career,” Trudeau said. “It’s a benefit not just to families, not just to kids, but to all of us.”

Sign up to receive the daily top stories from the Financial Post, a division of Postmedia Network Inc.

The next issue of Financial Post Top Stories will soon be in your inbox.