Holidaymakers at Heathrow may face queues of up to TEN hours

By Sanchez Manning and Harriet Dennys For The Mail On Sunday

Holidaymakers arriving back at Heathrow could face queues of up to ten hours in part because Border Force, Heathrow and unions are embroiled in a row over sheets of Perspex.

The dispute centres on whether there are enough transparent plastic screens in place to help protect Border Force staff from the threat of coronavirus amid an expected surge in passenger numbers over the coming weeks.

Transport Secretary Grant Shapps has warned that travellers will face longer waiting times at airports as the aviation industry opens up again. 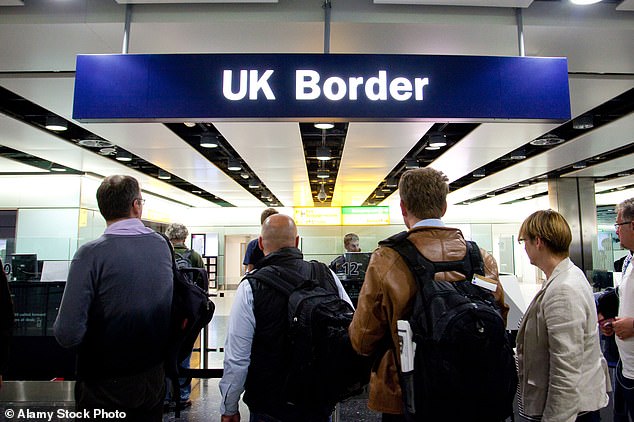 Holidaymakers arriving back at Heathrow could face queues of up to ten hours in part because Border Force, Heathrow and unions are embroiled in a row over sheets of Perspex

One union official claimed holidaymakers could be forced to queue for up to ten hours to clear immigration checks.

Immigration Services Union professional officer Lucy Moreton told The Mail on Sunday: ‘Every [immigration] booth that can be manned will be manned, but we have to keep officers two metres from one another. At most airports, there are wraparound screens and all the booths can be manned.

‘But at some locations – and Heathrow is one of them – there are only screens to the front and not to the side, so we have to man every other desk. It’s open to Heathrow to change that if they want.’

She suggested airport chiefs were avoiding installing ‘expensive’ screens at passport control stations in the hope that social-distancing rules would soon be scrapped, so the spending wouldn’t be needed.

But a Heathrow source rubbished her claims, saying the problem lay with Border Force not providing enough staff, adding: ‘Her comments are absolutely ridiculous and it’s not the case. It is down to the fact that ultimately there aren’t enough people to man the borders. 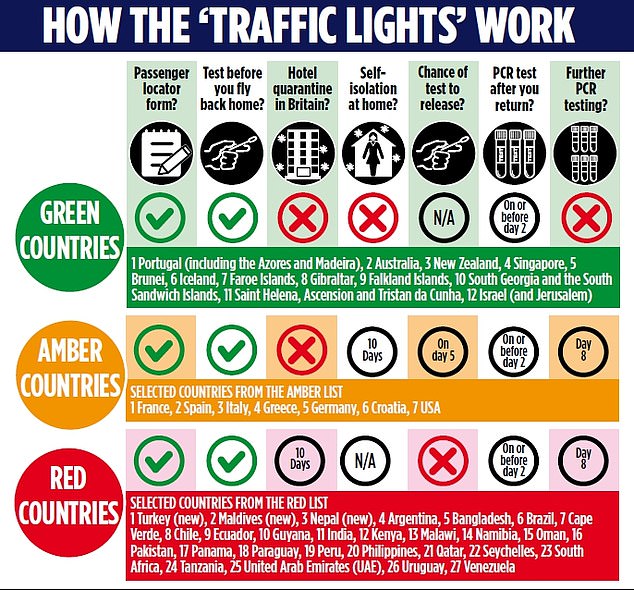 ‘We’ve spoken to Border Force staff, saying, “Do you want wraparound Perspex screens around the booths?” Border Force said, “No, it’s not going to make a difference.” So we’re not holding out for anything.’

On Friday, Border Force director-general Paul Lincoln attributed longer queuing times to officers having to check all travellers coming through immigration. ‘For the time being, passengers will need to accept an increase in the time taken at each stage of their journey,’ he said.

‘It takes a Border Force officer five to ten minutes to complete all necessary checks, which means that even for the most compliant passenger it might take 14 or 15 times longer to process.’

Last night, the Home Office said: ‘To protect public health, queues and wait times are expected to be longer as it is vital that thorough checks are undertaken at the border to prevent the importation of Covid-19. Border Force officers are making use of all desks and Perspex screens are in use so the maximum officers can carry out checks. It is inaccurate to claim otherwise.’

The Mail on Sunday also understands that passengers could be forced to sit on planes on the tarmac if immigration halls become too busy – and they may be diverted to other UK airports or even European hubs, according to a source.

Industry expert Paul Charles, of travel consultancy The PC Agency, said: ‘This is an urgent matter for the Home Office. The last thing the UK needs is to restart travel on May 17 but have queues that bring shame on Britain.’

Working for free (or how to ruin your career)

T20 Blast: Holders Notts Outlaws and Glamorgan only winners on night of rain-offs

A Rewarding Endeavor for Chemistry of Radioactive Molecules