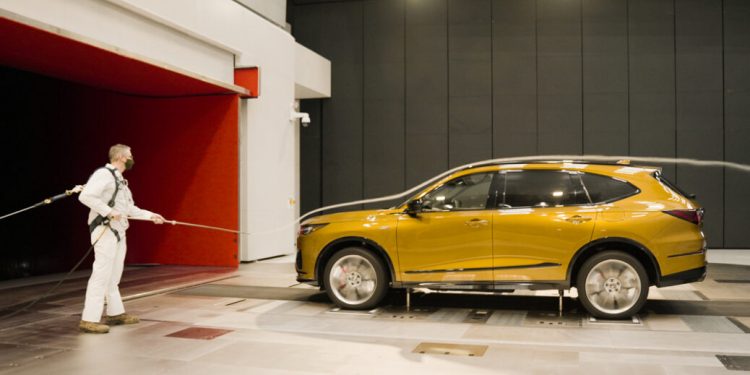 
Honda today opened its new US$124 million wind tunnel facility in East Liberty, Ohio, saying it “ushers in a new era of development testing capabilities for Honda and Acura products, as well as the company’s race vehicles”.

The new Honda Automotive Laboratories of Ohio (HALO) facility, located at the independent Transportation Research Center (TRC) in the centre of the state, is claimed to be the world’s most advanced wind tunnel, with three separate testing functions — aerodynamics, aeroacoustics, and racing — in one location.

Honda said it developed the multifunctional HALO facility to reinforce its “commitment to developing fuel-efficient and fun to drive vehicles”.

With a five belt, rolling road system designed for production vehicle development and a second, single, wide belt system for testing both high performance sports cars and purpose built race vehicles, the tunnel can generate wind speeds of at least 190 miles per hour.

It can also quickly enable a sophisticated acoustic test system for an aeroacoustic testing mode which uses a powerful system of acoustic arrays, made up of microphones and cameras, able to collect real time data and precision measurement. This becomes even more important an element of vehicle design as Honda moves towards full electrification because, absent engine and exhaust sounds, wind noise will be more noticeable inside the cabin of an electric vehicle. Using the acoustic test system, engineers will be able to identify the precise locations of both interior and exterior noise issues more quickly than before.

“Honda’s product development capabilities will advance to new heights thanks to this investment in our Ohio research operations,” said Jim Keller, EVP of Honda Development & Manufacturing of America (HDMA), and head of the automaker’s North American Auto Development Center.

The new wind tunnel is also an opportunity for Honda engineers to build relationships with other companies interested in aerodynamic and aeroacoustic research, support STEM activities, and sustain the general aerodynamic community’s testing needs.

This is the latest major investment in Ohio, where the company opened its first US car assembly plant in 1982 to build the Accord, taking the total to $14 billion.