Hornets have thrived with PJ Washington ahead of Hawks game 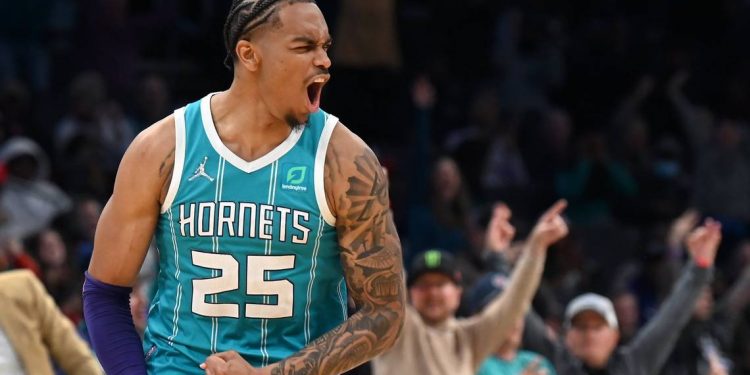 PJ Washington is about as even-keeled as they come.

Few things can get an emotional rise out of the Charlotte Hornets big man. But he’s salivating at the opportunity staring at them in Wednesday’s play-in tournament game against Atlanta. Washington was nearly bursting through his warm-up gear with anticipation, eager to try to conquer the expected soupy environment at State Farm Arena (7 p.m., ESPN).

“Man, I’m super excited,” Washington said following their morning shootaround. “I’ve been waiting on this for a minute. So everybody has a bad taste in their mouth from last year when we lost to Indy. So we don’t want to make that happen again. We are just excited to get here and show what we can do.”

Although a lot of it has gone overlooked, Washington’s play is one of the reasons the Hornets made their end-of-season charge and finished with 43 wins, which tied for the third-most since pro basketball returned to Charlotte in 2004-05. He stabilized their starting lineup following his insertion in the aftermath of Gordon Hayward’s injury, quickly jelling with the game-opening unit of LaMelo Ball, Terry Rozier, Miles Bridges and Mason Plumlee.

With Washington as a starter, the Hornets have won 60 percent of their games (15-10) and collected victories in 11 of their final 15 games.

“He’s great,” Bridges said. “He does all the little stuff for us. He rebounds the ball, sometimes he guards the best player, makes all the right plays. So he’s been great for us. Just coming off the bench and going into the starting lineup, that kind of reminded me of me from last year. He’s been great for us. So I give ‘P’ an A-plus this year.”

During the Hornets’ 15-game season-ending stretch, Washington averaged 10.9 points and four rebounds, connecting on 52.3 percent of his shots. He tossed in 15 points or more in three of those games and it’s no coincidence the Hornets went 3-0 in them.

When he’s flourishing, the Hornets are tough to beat.

“I’ve noticed that since I got here, honestly,” Washington said. “For me, I just try to do my best to be consistent, play as good as I can and just try to get a win. I don’t try to look at it too much, but at the end of the day I try to do all the little things.”

The move into the starting lineup allowed Washington to log more minutes at power forward instead of being a stretch ‘5’ and coming off the bench to relieve Plumlee as one of the first substitutes. He’s appreciative of the rotational tweak.

It’s put him more at ease.

“That definitely makes him comfortable,” Bridges said. “‘P’ can play ‘3’ through ‘5,’ but I think he excels most when he’s at the ‘4’ spot. And he’s been doing a great job, like I said, just spacing the floor, and making the right plays and rebounding the ball.”

In his last 24 games, dating back to Feb. 15, Washington is averaging 10.9 points, 4.9 rebounds, 1.1 steals and one block per game. He’s not settling for 3-pointers as much as driving more to the basket has resulted in dunks and power moves at the rim.

That provides the Hornets with another dimension.

“I feel like I’m playing my regular position,” Washington said. “I feel a lot more aggressive. I feel like that’s when I’m at my best. So just trying to do all the little things and kind of be like the glue guy for the starting five and doing a little bit of everything for sure.

“Just trying to be more aggressive using my body, using my strength to get to the rack and finishing. I feel like since I’m in the starting group a lot of the worse defenders have been guarding me, so I just try to take advantage of that.”

By doing it, he’s proved to be integral during Hornets’ late-season push.

“It’s huge for us because I feel like I can affect the game in a lot of different ways other than scoring, so that’s what I try to do,” Washington said. “Whether that’s deflections, with defense, guarding people, blocking shots, rebounding. Just all the simple things that you need to win a basketball game.”

Roderick Boone joined the Observer in September 2021 to cover the Charlotte Hornets and NBA. In his more than two decades of writing about the world of sports, he’s chronicled everything from high school rodeo to a major league baseball no-hitter to the Super Bowl to the Finals. The Long Island native has deep North Carolina roots and enjoys watching “The Fresh Prince of Bel Air” endlessly.
Support my work with a digital subscription
Tags: aheadgameHawksHornetsThrivedWashington
Previous Post

For Indonesia’s tech star GoTo, success a long time in the making | Business and Economy