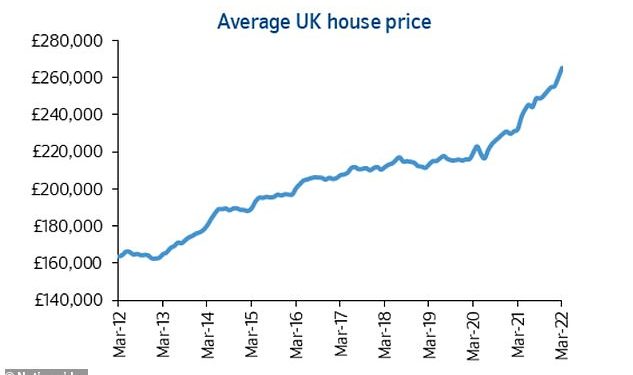 
House prices have rocketed 14.3 per cent over the past year, Nationwide Building Society said, with property inflation hitting its highest level since 2004.

Despite warnings that the cost of living crisis and rising interest rates would dampen the property market, house prices have accelerated. 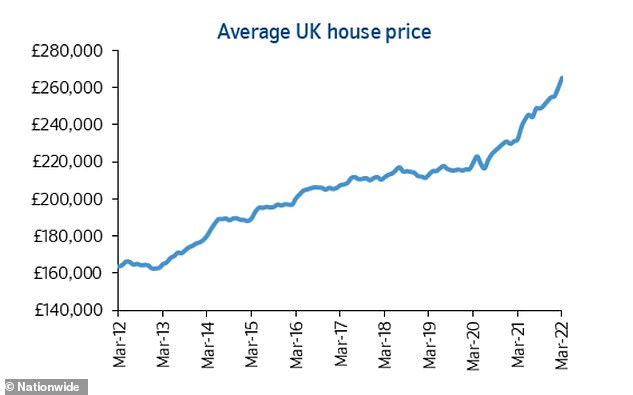 ‘Prices are now 21 per cent higher than before the pandemic struck in early 2020.

‘The housing market has retained a surprising amount of momentum given the mounting pressure on household budgets and the steady rise in borrowing costs.

‘Nevertheless, we still think that the housing market is likely to slow in the quarters ahead. The squeeze on household incomes is set to intensify, with inflation expected to rise further, perhaps reaching double digits in the quarters ahead if global energy prices remain high.

‘Moreover, assuming that labour market conditions remain strong, the Bank of England is likely to raise interest rates further, which will also exert a drag on the market if this feeds through to mortgage rates.’

Detached properties have seen the biggest price increase since the onset of the pandemic as bigger homes have become sought after by buyers who can work remotely.

In comparison, flats have seen the weakest growth, having gone up in price by £24,000, or 14 per cent, since the start of the pandemic. 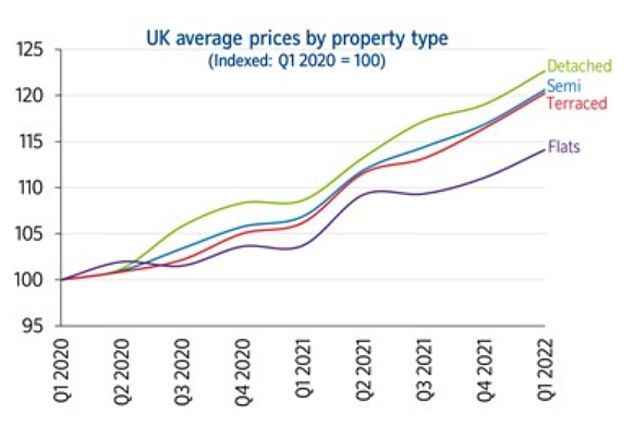 The average price of a detached house has risen by £68,000 since the first quarter of 2020

‘Shifts in housing preferences as a result of the pandemic have been a significant driving factor of housing market activity over the past two years,’ Gardner said.

‘Last year, our research identified a ‘race for space’ and this was reflected in price trends by property type, with detached homes seeing the strongest growth and flats the weakest.’

This is making it increasingly difficult for those wanting to trade up, as the price gaps between different property types are now at a record high, with many forced to buy in a cheaper region.

Gardner pointed out this was particularly acute for those looking to move from flats to terraced houses, where the price gap has more than doubled since the onset of the pandemic – from around £12,000 to over £25,000. 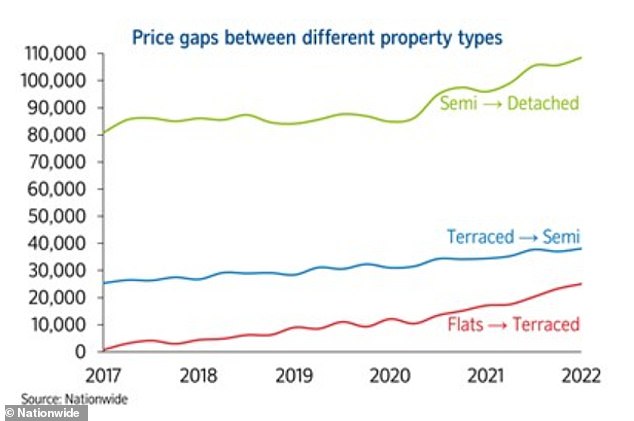 The price gaps between different property types are now at a record high, Nationwide said

‘However, in many cases households have managed to bridge this gap by moving to a cheaper region,’ he added.

‘For example ONS / Land Registry data shows that the price of a typical flat in London is around £428,000, while a detached property in the East Midlands costs around £350,000.’

Anthony Codling of property platform Twindig said: ‘The strong employment market coupled with enforced savings during the Covid lockdowns has certainly put money in the pockets of home buyers and it appears that they are very willing to spend that money on houses.

‘However, the race for space has created another tier in the housing market with house price inflation for detached houses ‘detaching’ from that of flats, this makes trading up more difficult.

‘As if it wasn’t already difficult enough to get on the housing ladder, now it is more difficult to climb up it.’

Wales has remained the strongest performing region in the first three months of the year, with prices rising by 15.3 per cent, although that is a slight slowdown from the previous quarter.

London has remained weakest, with prices rising by 7.4 per cent, which marks an acceleration from 4.2 per cent growth in the last quarter of 2021.

All English regions saw price inflation accelerate, with the South West remaining the strongest with annual house price growth of 14.4 per cent, which is the highest since 2004.

This was closely followed by East Anglia, which saw annual price growth of 14.2 per cent, up from 10.4 per cent in the previous quarter.

Northern Ireland saw a slight slowing in annual price growth to 11.1 per cent, while Scotland saw a 12 per cent year-on-year rise in house prices, the strongest rate of growth since the third quarter of 2007. 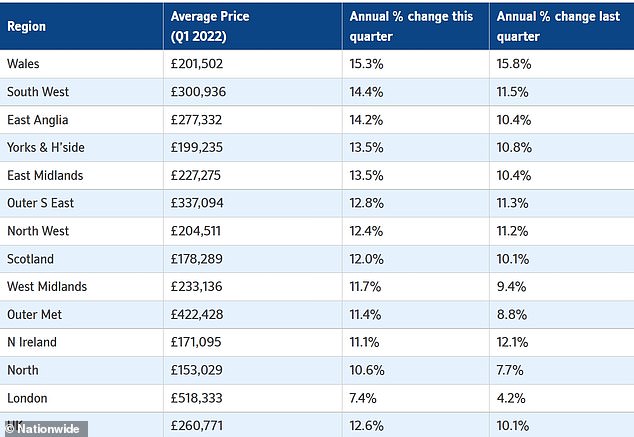 What analysts expect from the coming months

Property experts seem to agree that house prices cannot continue to rise at the current pace, although they do not seem them falling off a cliff.

Karen Noye, mortgage expert at Quilter, said: ‘How the housing market truly reacts to the current circumstances will not be seen for a few more months.

‘However, it is unlikely that house prices will be able to continue rising at the same rate we have seen over the past couple of years – particularly against the backdrop of an economy already trying to recover from the impact of the pandemic.

‘If we do begin to see a slowdown, house prices would likely experience a gradual fall as opposed to a sudden drop. There is simply too much demand and too little stock at present, so house prices are likely to remain high for some time yet.’

Jeremy Leaf, north London estate agent and a former RICS residential chairman, said: ‘Although the Nationwide house price index has generally been widely respected for its accuracy and reliability, its latest report has a whiff of yesterday’s news.

’These figures are still showing prices rising strongly based on mortgages granted for sales agreed several months ago so don’t reflect what’s been happening at the sharp end since.

‘Rising interest rates, inflation and wider concerns about the impact of the terrible events in Ukraine in particular have put a dampener on transactions and prices which continue to be sustained by stock shortages.

‘We definitely have the feel of entering a more ’normal’ market phase, similar to pre-Covid times with supply and demand increasingly in balance.’