How Alan Ritchson Became an Absolute Unit for ‘Reacher’ 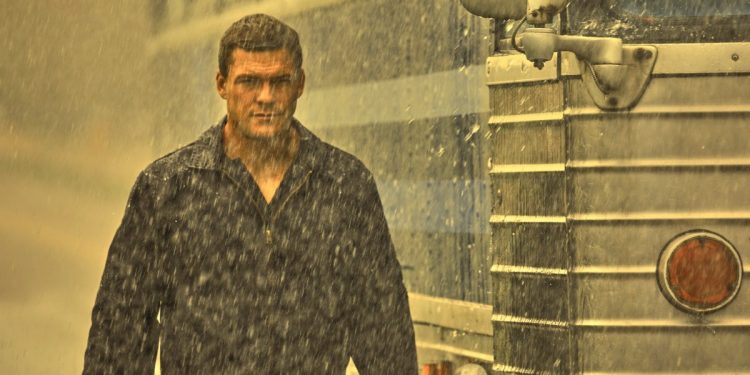 
Jack Reacher, as described in Lee Child’s popular book series, is a former U.S. Army major who roams the country bringing bad guys to justice by any means necessary. In Never Go Back, the eighteenth book in the Jack Reacher series, the 6’5” vigilante also has “a six-pack like a cobbled city street, a chest like a suit of NFL armor, biceps like basketballs, and subcutaneous fat like a Kleenex tissue.” That’s a pretty tall order to fill for any casting director, but the highly anticipated Amazon Prime Video series Reacher eventually found their man in Alan Ritchson.

“I’m so grateful for the opportunity to bring this guy to life,” says Ritchson. The son of a retired U.S. Air Force chief master sergeant, Ritchson was especially excited to jump into a series where a former military man was the hero. “I’ve read each of the books at least twice at this point, and I grew up revering my dad. I wanted to make sure I got this character right for all the fans out there, but also for him.”

We spoke with Ritchson about the pressure of an iconic figure, bulking up for the role, being underestimated, and the brutal fight sequences to expect each episode.

Mens Journal: How does it feel to be taking on such an iconic character?

Alan Ritchson: The fact I’m now a part of this world Lee Child created is absolutely surreal. I heard about this search for Jack Reacher a couple years ago, when they announced they’d be doing a new series for Amazon. One of my best friends is a production designer and a big reader. We’ve done a number of movies together, and he was one of the first people I reached out to about the role. Then he starts sending me sentences from the book—like “hands like Christmas turkeys” and “has to go sideways through doors.” According to him, I was the man for the job.

Did you dive into the books yourself at that point?

I did—I raced through them, and understood immediately why so many people were fans of the character. I ended up reading 24 books in eight months—in order—starting with Killing Floor and following that with Die Trying, which I liked even more. You start to meet these great supporting players like “Hook” Hobie who take it to that next place. I felt a real desire to get the part. The pressure was building in my own mind. That internal pressure only got more serious with each book that I read. I feel very fortunate that it worked out.

One of the great things about Reacher is he’s not just a force to be reckoned with physically, but he’s also very cunning as a detective. Did you enjoy getting to play someone with this depth of character.

I’ve felt like Derek Zoolander in the earlier stages of my career—from that scene where he talks about wanting people to know how funny he can be. I feel that way in that I want people to know how smart I actually am. I started modeling when I was 18 years old, and it’s the most fruitless business. I’ve been asked not to open my mouth on set and treated like a sack of meat. I feel like I’ve got good, creative ideas to share with the world, and there really hasn’t been space for me to do that.

I’m the last link in the creative chain as the actor most of the time. During my first time as the lead of a show, I challenged everything—hoping to make it better. For that I got yelled at to just say my lines. I was excited to do something more than just use my body. My first real job was playing Aquaman on Smallville, and I didn’t get that because I’m an intellectual. I got it because I looked like the comic book character. Those situations have been present throughout my career, and because of them I’ve got a bit of a chip on my shoulder. The fact that Reacher is often the smartest person in the room is very exciting to me. His intelligence is just as much a part of his being as his physicality.

I was a late bloomer, and before puberty I had girls coming up to me asking whether or not I was going to be cute when I grew up. I was 18 when I went through my growth spurt, and at the same time I started going to the gym. I had it in my mind that I was going to get a muscle or two. I started to get a completely different response then—everybody suddenly assuming I was going to be a jerk or an idiot because of the way that I looked. I know from the books that Reacher has to deal with similar types of assumptions. It sets the stage for a lot of fun, where he can play with people’s preconceived notions about who he is.

Given that your father was in the Air Force, there must have been some additional excitement around portraying Reacher who was also a military man.

He’s the one person who I’ve always looked up to, and he is my hero. I think the military really gave him the structure that he needed. There’s an effect it has on a person, the way they carry themselves—from the way they stand to how they shake your hand. Getting to honor them creatively onscreen is a dream. I had been drawn to enlisting myself when I was in high school with the hope to join the Special Forces. My dad was against it, which at first I was surprised by—but I guess he saw that creative desire in my eyes. Since I wasn’t able to actually be a solider, at least I get to play one on TV. It’s an honor to portray these people who I truly respect.

Did you look anywhere beyond the books for insights into the role?

I really didn’t need to look much further. There were a few nights of researching the specifics around how detectives work in those situations. But there was so much already out there for me to study. If you have 24 books of a character and don’t know how he would respond to a situation by the end of that, then you’re in real trouble. The fact that more than 200 million books have been sold is pretty staggering to think about. Those facts aren’t lost on me.

You’ve prepared for your share of physical roles. How are you going about the process this time?

I did an attack on all fronts to get ready for this one. I do what I can to stay healthy and in shape all the time since a lot of my projects are in that superhero genre. I try to stay lean, so I’m usually walking around at 205 pounds. For this I wanted to bulk up though, and I ended up putting on 30 pounds to end up at 235 pounds. I was grinding it out five days a week for the eight months that we had to prep. I don’t usually use weights because I get big so quick but I pulled them out for this. I got to unleash in the gym. The real requirement is you need to get the calories, proteins, and macros, so it was a conveyer belt of food. It’s a full-time job to get 4,500 calories and 300 grams of protein in your body. I was lucky that I had the help.

I’ve had a few trainers over the years and have a few numbers to call when I need help with a plateau, but I primarily do it on my own now. I was in Toronto filming another show and the real issue was getting weights in the middle of the pandemic. The rules were very strict in Canada, so there was no chance of getting out to train anywhere else. I moved the dining table out of the place that we were renting and we built a full-sized gym in that space. There was no avoiding training in the morning, because it was staring right at me when I woke up. No commute. No excuses.

How did you set up your training area in that space?

When you’re training five days a week, muscle confusion and versatility in the gear is important. That’s the only way to grow. So I needed a few key pieces of gear that would help me do that. I found this piece of equipment by Northern Lights that’s a Smith machine—a twin cable tower with a lat pulldown bar, row cable, squat rack, and a bench press. It’s this monstrous tower that fits in a tight space and ticks all the boxes—all the elements I need the most. That combined with these awesome adjustable free weights and a bench covered all the bases. My wife would use them sometimes or my kids would play with them and I was forced to wait for the weights in my own home.

There’s such great detective work and dialogue in the show, but there are also incredible fight sequences. What was it like to film those?

Early on I thought that this show was just going to be a bunch of fights, one after another. Luckily the show ended up being so much more than that. That said, that propensity towards violence is a huge part of who Reacher is. He lives outside of the law and makes his own set of rules, especially when it means bringing people to justice or protecting the innocent. So it was important for us to get those fights right because they have a purpose to his story.

The fights had to be done with that surgical precision and brutality that his past has given him. That’s what he’s known for. So we had to adapt my personal fighting style, which is this brawler style mixed with Brazilian Jiu-Jitsu that I’ve done onscreen before. For these I had to break it down deeper and make it a lot more specific. There’s a line that Lee Child writes that Reacher uses his “elbows like axes” and I worked with our stunt coordinator Buster Reeves to bring that energy. Luckily we had months to prep for each one. People can look forward to a big battle every episode. I don’t think fans will be disappointed.