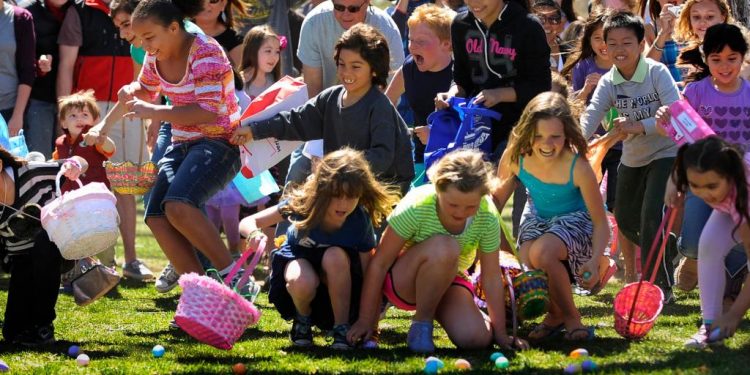 
Easter brings together an unlikely cadre of traditions: church, bunnies and eggs.

But what may seem like an odd trio is actually tied together by the universal themes of spring and life renewed.

A fusion of traditions

“For Christians, Easter has always been about celebrating the central miracle of Jesus’s death and resurrection. So, it’s been an important date in the Christian calendar, really going back to the very earliest days of Christianity,” said Andrew Hann, the head of the Historians’ Team at English Heritage, the heritage organization covering England within the UK.

“But of course, what we now know is that Easter has a lot of pagan origins — so, it comes from a lot of traditions that are much earlier than Christianity itself.”

Much of that comes from Easter’s theme of resurrection. But rather than see resurrection through a Christian lens, believers of pagan religions focused on the natural world and celebrated when the world “resurrected” in the spring.

“This has been celebrated by people for thousands of years, a long time before Christianity,” Hann said. “The pre-Christian world is full of lots of stories about resurrection and springtime.”

For example, 2,000 years before Christ, the Sumerians had a tradition around the goddess Inanna. She descended into the underworld during winter and, once winter ended, she was brought back to life.

“Rebirth is very central to traditions going right back to the very early days of civilization,” Hann said. “The story is going through all these different religions that have this idea of rebirth in the spring and which is very, very closely linked to the Christian tradition.”

Here are a few examples of how Christian and pagan elements came together to form the Easter holiday we know today.

What’s in a name

The name Easter may have pagan origins.

“Although quite a few people think of it being linked to the Hebrew word Pesach or Passover, there’s also a tradition in northern Europe that it’s linked to the pagan springtime goddess Eostre,” Hann said.

“She is basically celebrated during the spring, at the spring equinox.”

First documented in the 8th century, Eostre was celebrated during the spring equinox and is associated with some familiar Easter traditions that have lasted to this day.

“Even the humble hot cross bun,” Hann said. “You would think that obviously has this Christian association because of its association with the cross of simply symbolizing a crucifixion of Christ; but also that the pagan god Eostre had buns that were marked with a cross to celebrate the four seasons on the four primary phases of the Moon.”

The moon’s significance in pagan religions is evident in the way the Easter date is decided.

According to Hann, Easter doesn’t fall on the same day every year, and that is because its date is decided by the phases of the moon. The Easter date falls on the first Sunday after the first full moon of the spring equinox, which is the first day of spring.

Eostre’s association with spring went beyond that of lunar cycles and cross buns — she was also associated with the beloved mascot of Easter.

The tradition of an Easter bunny is centuries-old.

According to Hann, rabbits and hares are associated with ancient symbols of fertility, particularly the idea of fertility in the spring and the spring equinox. This time of year when life returns is then linked to the Resurrection.

The earliest known reference to the Easter hare is from a 1682 book by German Georg Franck von Frankenau, who links hares and rabbits with Christianity.

“He talks about an earlier tradition in central Europe that this is coming from [the hare’s] association with fertility and the Virgin Mary,” Hann said. “Sometimes you see the paintings of the Virgin Mary and you see a hare at one side of her.”

Then, the Easter hare became associated with another symbol of fertility: eggs.

“It’s quite a strong tradition, certainly in the 17th-century, of the Easter hare known as the ‘Osterhase’ [pronounced AUS-ter-HAUS],” said Hann. “They delivered eggs to children who are being good.”

The hare brings the eggs along and hides them to start a new life with the Resurrection, Hann added.

This tradition of the Easter hare then began to spread outside of Germany. During the 18th and 19th centuries, German immigrants imported the idea of an Easter hare giving eggs to children to the United States.

The Easter hare experienced a bit of a makeover in America, where the hare was replaced by a cuddlier alternative, according to Hann.

“You, therefore, get it morphing into the idea of the Easter Bunny,” he said. “The Easter Bunny is then imported back from America into Europe in the 20th century, so it’s come full circle.”

In addition to being hidden by the Easter Bunny, eggs have played a starring role in Easter due to their association with fertility and new life.

According to Hann, eggs have been associated with Easter from the very early days of Christianity.

“Christians, going right back to the Middle East in Mesopotamia, used to dye eggs around the period of Easter, which were then given as gifts,” he said.

“This practice was then adopted by some of the Orthodox churches in Eastern Europe — in Russia, in the Middle East — and then that passed through to Western churches as well.”

Different parts of the world had their own take on Easter egg decorating.

According to Hann, one tradition in England involved making pace eggs. Coming from the Latin word “pascha” which means “Easter”, pace eggs are hard-boiled eggs that were boiled in water containing onion skins or gorse flowers.

“This produced delicate yellow and brown patterns all over the egg, so you get these sort of beautifully decorated eggs,” he said. “Then, you could paint them as well and decorate them in that way.”

Hunting for eggs also has Christian roots. According to Hann, the first known egg hunt was hosted by Protestant reformer Martin Luther. Luther organized egg hunts for his congregation, in which men were sent to hide eggs and then women and children were sent to find them.

“This was supposed to be a nod to the story of the resurrection because, obviously, the empty tomb was discovered by women,” Hann said. “[Luther] was trying to draw attention to the role of women, in particular, and children in trying to find what has happened to Jesus after the birth after he has risen from the dead.”

Easter egg hunts then make their way outside of Luther’s Germany, with some of those cultural ambassadors being part of Britain’s royal family. According to Hann, Queen Victoria had German ancestry and is seen as popularizing Easter egg hunts in England.

“It was thought that her mother, the German-born Duchess of Kent, was the first person that introduced Queen Victoria to egg hunts because she organized one when Queen Victoria was a child in 1833,” Hann said.

As time passed, what was originally a German tradition of hunting for Easter eggs became more widespread and practiced outside of Europe.

A time for celebration

“Easter has always been this period of this moment of celebration and renewal. And so it’s always been a very joyous time for Christians and a time of quite a lot of merriment,” Hann said.