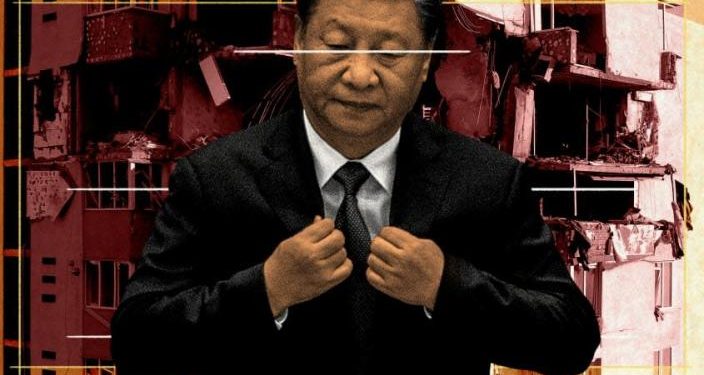 
“Strategic” and “exemplary” are hardly ever used to describe Russian President Vladmir Putin — unless we’re talking about the Chinese internet. While Putin is met with condemnation from the West, he’s winning wild cheers in China.

Since Russia invaded Ukraine last month, China has broken away from other world powers and taken a comparatively pro-Putin stance on the war. Western nations such as the United States and Canada as well as private companies from McDonald’s to Volkswagen have been quick to sever many financial ties to Russia that could aid its war effort.

That’s how China has become Russia’s economic lifeline. The Chinese government has shown a general unwillingness to remove Chinese corporations from Russian soil, and Guo Shuqingchair of the China Banking and Insurance Regulatory Commission, has said Beijing won’t help sanction Russia. China’s state-controlled media has also been quick to embrace Russian propaganda, instilling a broad sense of pro-Putin sentiment among the Chinese people — and my Chinese family is no exception.

Growing up in a multicultural household, it was easy to spot the ideological difference between my American parents and Chinese grandparents. My parents left China and my grandparents in the 2000s to emigrate to American. In the years since, like most other Americans, they’ve adopted a Western belief system, which now includes recognizing the harms of Russian aggression. But my relatives who remain in China have undergone no such shift, including in their stance on this war.

A few weeks ago, my mother had a phone call with my grandma, who lives in a small rural town in eastern China. In just minutes, the call escalated from typical catching up to full-blown rebukes of each other’s countries. I could hear my grandma throwing around hard-hitting phrases, like “brainwashed by America” and “Joe Biden’s fault.” “Don’t believe everything you read,” my mom shot back. Neither my mother nor grandmother are irritable people, but I could see my mother’s anger and hear the strain in my grandma’s voice through the phone.

What was more surprising, though, were the parallels between my grandma’s words and the jargon used in Chinese state media. As anti-Western sentiment in China heightens, pro-Russian stories have boomed in Chinese cyberspace. Putin’s declaration of war speech on Feb. 24 received an outpouring of Chinese praise, and state censors allowed pro-war posts to go viral.

“A comment widely circulated across various Chinese social media platforms in recent days depicts the Russia-Ukraine conflict as a romantic triangle,” reports The Atlantic. “Ukraine is characterized as Russia’s ex-wife, who mistreated the couple’s two children — the breakaway pro-Moscow regions of Luhansk and Donetsk — and who also flirted with the United States and dreamed of joining the NATO family but was rebuffed.” An article portrayed Russian aggression as a champion for combating NATO forces, adding that even discussing the war over dinner is remarkably satisfying. Users of Weibo, a Chinese analog to Twitter, praised Putin for doing a “beautiful job” fighting a necessary war. “If I were Russian, Putin would be my faith, my light,” said one Weibo post.

Against all this, anti-war comments have received little traction in China, because they’re quickly censored by the Chinese government. Chinese TV star Jin Xing had her Weibo account suspended after expressing contempt for the war, and most users are only seeing pro-Russia and pro-Putin content in their feeds.

Inevitably, that propaganda affects how Chinese people think about the world. Recent conversations with my grandparents have consistently drifted into discussions about the war, and more often than not, we end the call with a deep sense of anger about each other’s political opinions. Beyond all its other ills, beyond worsening U.S. and China relations, this war is hurting my relationship with my grandparents.

We’ve argued over politics before, from 2018 trade war to American support of Taiwanbut this feels like a tipping point. Conversations with my relatives in China are increasingly, uncomfortably careful. We walk a fine line to avoid topics too taboo or controversial — and it’s a line we have to walk because the Chinese government is lying to my family.

Trump campaign ordered to fork over $350,000 for trying to enforce ‘unenforceable’ NDA