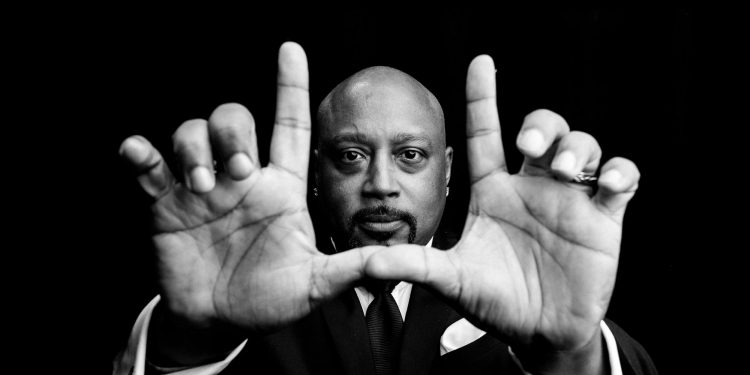 Daymond John is known all over the world for starting the fashion brand FUBU. But what John has in common with entrepreneurs everywhere is that he’s had to overcome adversity to get where he is today.

Let’s take a closer look at some of the lessons that budding entrepreneurs can learn from John’s experience. Even non-entrepreneurs will likely learn something from his career and life story.

Never give up on your vision

When John set out to start FUBU, he needed to secure a loan to get the business off the ground. But after more than 25 banks turned him down, things started to look bleak. In truth, there weren’t many other options to which he could turn.

Humiliated and frustrated, John’s mother came to the rescue. She took out a second mortgage on her home for $100,000 to help him fund his vision. Although this money was a lifeline, John wasn’t out of the woods yet. He continued to pick up shifts at Red Lobster, where he’d been earning a living while filling clothing orders out of his makeshift home factory.

Finally, John got his first real, big break. Intrigued by the trend of urban clothing, Samsung contacted him and agreed to help fund his orders if he could earn $5 million over the course of three years.

As you might have guessed, John smashed that three-year goal. He generated more than $30 million in just a few months after contracting with Samsung.

John never lost sight of his larger goal, no matter how close he came to losing it all.

There’s a common saying across many different industries: Work smarter, not harder. Although this expression has its merits, John has demonstrated, time and time again, the value of working hard AND smart.

When he started out, FUBU was a very small operation, so John worked constantly. He did whatever it took to keep the engine running. In John’s mind, there was nothing wrong with this. After all, if his business was going to be successful, it would be in large part due to his own effort.

But as his business became more well-known and more profitable, John was approached about participating in a new show on which investors listened to televised pitches made by entrepreneurs. From there, the investors could make offers for equity in the entrepreneur’s company, or structure a deal in a different way.

At first, John didn’t think the investment life was for him. He’d been working with his own two hands all his life — why should he stop now and have other people do the heavy lifting? After giving it some thought, though, he realized that this new show, Shark Tank, represented an incredible opportunity to make money and help entrepreneurs without having to overextend himself.

John has been a regular on the hit show for over a decade now. He still works for his money, but he also lets his money work for him. He truly knows how to balance working hard and being smart.

Related: If You’re an Entrepreneur, Daymond John Says Now’s the Time to Take Advantage of This Company’s Free Service

Know what you know

It’s safe to say that John is a legend in the fashion world. He built FUBU from the ground up and learned about fashion, clothing and business through his many successes and mistakes.

So when a clothing brand pitches its idea on Shark Tankit needs to pay special attention to everything John has to say, just as he needs to evaluate whether or not it is offering a quality product.

Many clothing brands have brought their pitches to the tank, but none are quite as memorable or as profitable as BOMBAS, a sock company that partnered with John on Shark Tank. With his help, it has grown exponentially over the years, helping countless people with its community service objective and generating significant profits for its investors.

John will sometimes venture into a partnership with an entrepreneur who’s involved with something outside of clothing or fashion, but he generally tends to stick with what he knows best.

Related: Daymond John: 5 Reasons Why Education Is the Key to Your Success

In 2014, an 11-year-old named Moziah “Mo” Bridges pitched his bow-tie business on Shark Tank. He came in with his mother, but Bridges did all the talking. He confidently presented his business, discussed his sales and asked for $50,000 for a 20% stake in his company Mo’s Bows.

Slowly but surely, each of the sharks went out, with only Kevin O’Leary and John remaining in the running. O’Leary offered Bridges a royalty deal, but John offered him something much better than money. He offered Bridges mentorship.

He suggested that Bridges turn down Kevin’s deal and that, although John wouldn’t invest in the company officially, he was happy to provide guidance and advice to the young man.

Amazingly, this is just one of the many examples of John’s seemingly bottomless charitable heart. He gives time and money to improving the standing of Black and other under-represented entrepreneurs. He knows what it’s like to struggle coming up in the world, and he also knows what it takes to succeed. Much of the time, the secret success ingredient is finding a great mentor who’s been there before.

In a recent interview on the Making Bank podcast with Josh Felber, John said, “Take your time. Think about it. Ask several people. Read as many blogs as you can. If you find the same common thread through a bunch of different people, try to put it together.”

This is a good metaphor for John’s career, as he’s found common threads throughout his life, such as helping others and working as hard as he can. Anyone who wants to start a business — or even just be successful in life — should pay special attention to the lessons John lays out on a daily basis.