How do you write a Eurovision banger? Montaigne takes us behind the scenes of Technicolour ahead of the 2021 Eurovision Song Contest


With hours to go until the first Eurovision semi final, Australia is in a position no other delegation has ever been in: we’re in the competition, but we’re not performing at the event in Rotterdam.

Where and when to catch Eurovision this week

No-one can know whether Montaigne’s prerecorded rehearsal clips and entry will be enough to connect with the hundreds of millions of people watching live from the stadium and on screens across the world, simply because it’s never been done before.

“There’s a lot of commentary from the fans asking whether this will work for Australia or against us. It’s impossible to tell in the world of Eurovision, because at the end of the day, it’s a song contest,” says Josh Martin, head of Australia’s Eurovision delegation.

“It’s impossible to predict the voting patterns of 200 million people.”

There’s that, and the fact that Technicolour is the kind of layered song you need to listen to a few times to truly understand its brilliance: in the cutthroat world of Eurovision, entering a track like that is a risk.

The Eurovision odds aren’t currently in her favour: there is a chance Montaigne won’t make it to the final this year. If she doesn’t, it’ll be the first time in Australia’s six years competing.

“[Technicolour] will just be too different for some countries,” Paul Clarke, the executive producer and creative director of Eurovision — Australia Decides says. “But you never know. You just never know.”

Having dedicated the last year and a half of her life to the song contest as the would-have-been 2020 and returning 2021 contestant, Montaigne knows this.

There were other songs in the works before she landed on Technicolour, a dramatic and unapologetic empowerment pop anthem complemented by her powerhouse vocals.

So how did the 25-year-old decide Technicolour was the one?

Martin says the 2020 contest’s cancellation (due to COVID, of course) presented a unique opportunity. Anyone who knows anything about Eurovision knows it has the tendency to err on the ridiculous side at times. But “in this time”, there are messages of hope to be found even in Eurovision songs.

“What it gave us the chance to do was to set Montaigne a brief to write a winning Eurovision song,” he says.

“Now, that’s not an easy thing to do,” he laughs. “That’s like saying, ‘Can you produce a TV show or a movie that’s going to be a blockbuster success?'”

“It was a very hard place to start writing,” Clarke agrees, referring to Montaigne’s whirlwind Eurovision selection, followed by months of preparation for a performance that never happened.

“When you’ve been on this really super-fast track, then all of a sudden, you’re just stopped.”

The birth of Technicolour

Montaigne was gentle with herself to start with, recognising that the world was undoing itself around her and that she was undergoing a reckoning of her own.

In 2020, she shaved her head and changed her aesthetic entirely, while her musical tastes moved towards hyper pop and the electronic end of the musical spectrum.

“I think that when humans are placed in stagnation — especially involuntarily — in order to assert some sense of control, they start to want to change something about themselves,” Montaigne considers.

“And so, it’s very possible that going through a pandemic and being at home all the time and not doing heaps encouraged me to flip the table.”

“It started to feel like, genre-wise, you could almost do anything,” Hammer says.

There was at least one thing decided for them: the writing duo knew their song needed to come under three minutes. And Montaigne had several thoughts about what to do in them.

Why is Australia still in Eurovision? 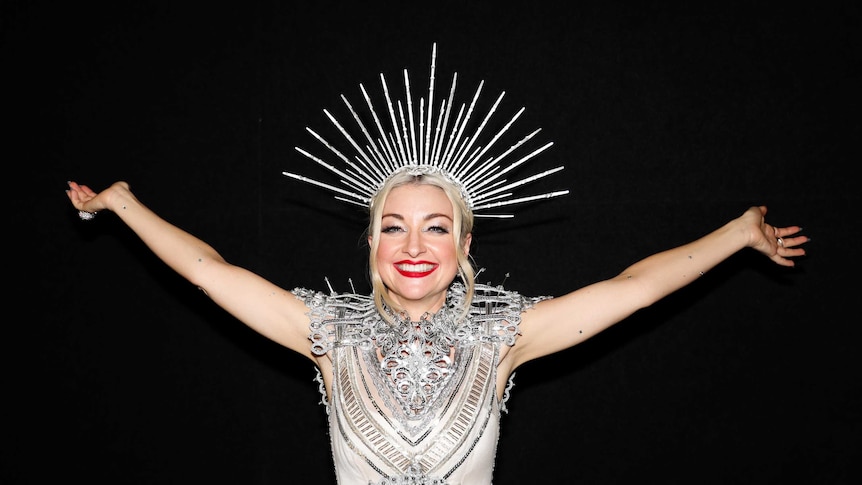 We may have been competing in the Eurovision Song Contest for years now, but for some, it remains a mystery how we managed to get there in the first place — let alone why we’re still in it.

“Montaigne’s prolific with ideas, and has a super creative mind, a very powerful intellect,” Hammer says, pausing between each descriptor.

“I … shaped my personality so I could be supportive of her and her ideas. I talked less than I normally would because I felt like my role was just to let her personality fill the room.”

“My thinking was that [the song] should have dynamic range and a surprising moment; that it should seek to uplift or surprise or entertain or move,” Montaigne begins.

“And there needed to be a big vocal moment — I think [Eurovision] loves that from women, it’s especially gendered.

For a while, that was all they knew they wanted to do. Then one day, as if out of nowhere, Montaigne told Hammer she had a vision.

How Montaigne and Hammer made ‘magic’ in a single day

She came to the studio with an acoustic guitar riff she’d created while playing around in her bedroom, along with what would eventually become the first line of Technicolour.

“I had the melody at the beginning,” she says, and then sings softly: “I wanna be close to my mother.”

From there, Montaigne says the day involved mostly “me sitting on the couch playing The Legend of Zelda: Breath of the Wild, while Dave tinkered with digital knobs on the screen” and the pair listening to Rina Sawayama and the Cha-Cha Slide in between plotting out notes.

At some point, they decided to twist the song in the pre-chorus: Montaigne says she didn’t want the entire track to “just be despairing”.

“My favourite narratives are the ones that are able to encapsulate the horror and the beauty,” she explains.

Once the structure was there, Montaigne set about harmonising with herself and stacking vocals.

“There are quite a few sections in Technicolour where she’s done six or seven harmonies,” Hammer says, in awe.

“Her musical sense is so strong that she can just do a lead vocal and then go, ‘Yep, again’ and then will just build these harmony groups of herself.

“She’s so tight and precise that sometimes it feels computer generated. But it’s her raw voice.”

At the end of the day, Montaigne knew Technicolour was it: “I was like, this song’s a banger,” she says, and then laughs.

“You don’t even have to do that much analysis. You just hear a song and you’re like, ‘Yes, that song slaps’. It’s an instinctive thing. A lot of people were like, ‘Let’s write more songs!’ and I was just like, ‘Hello? This is the song, full stop.'”

The result was three choruses, with six different sections bridging them, along with a Eurovision-worthy key change towards the end.

“And it all happens within three minutes!” Hammer says. “So it feels like a really wild ride.”

But that isn’t all: Technicolour’s lyrics pay homage to the chaos of the pandemic.

“It plots a train of thought that goes from, ‘Everything’s really hard, it’s tough to be a human and especially a young person in the year 2021. I’m struggling’, and then progressing to, ‘But I know I’m resilient and that I have a well of power within me,'” Montaigne explains.

“And the other thing that eases situations like that is having people around you; having friends or family or communities or movements that see you and hear you and tell you that you belong.

“That’s also what makes people powerful, and feel safe and loved and secure.

“So, the moral of the song is that people power is the best power and the most powerful, and that, ultimately, you’re not alone, even if you feel it.”

Clarke puts it like this: “Montaigne created this [journey] in her mind of herself being able to just drop out of the mental challenges that the pandemic delivered us all and then just flick the switch to superhero.”

To Hammer, that overarching message is the most important part.

“Sure, we’ve got the eccentric, bold production and bold song. But in those lyrics there’s a sense of acceptance and individuality. And that’s such an important thing to be pushing out to the global stage.

Dami Im sat covered in rhinestones on a box. Kate Miller-Heidke swung from a pole. What will Montaigne’s thing be?

Staging, Clarke explains, is “probably worth about a third of the points at Eurovision”.

Montaigne wanted the Technicolour performance to have a sort of “magic girl energy”.

In the end, Clarke says the team decided to go for a powerful classic rock look inspired by the cover of Lou Reed’s Transformer for the live performance, which was prerecorded in a closed Sydney studio back in March.

“While Montaigne isn’t dressed in leather, we’ve gone for something where she can just feel incredibly powerful and in control.”

There will be female dancers and there will be choreography, but not as much as there might have been with an easier song to sing.

“I need to be absolutely focused and to stand still to sing [Technicolour] perfectly, so that was a challenge,” Montaigne says.

“You can’t match Eurovision for Eurovision with the technical wizardry and incredible power of 2,000 moving lights and 25 cameras,” Clarke explains.

“So this year has been about trying to integrate the performance as much as we can into the show so it doesn’t feel like we’re skyping in a performance,” Martin adds.

This meant the team had to “look for ways to make the song bounce and for Montaigne to cut through”.

Neither Clarke nor Martin say too much about what that means, but they do reveal their strategy is looking and feeling “different to everyone else”: this served them in 2016, when Dami Im represented Australia sat on a box, resplendent in a rhinestone-bedazzled gown, and again in 2019, when Kate Miller-Heidke towered above the Eurovision stage swinging from a pole.

Montaigne hasn’t seen the recording for her performance yet. In the months since she took to the stage, she’s found herself in a sort of purgatory, mulling over what she could have done differently.

“I can’t change anything about it,” she explains, resigned: she’ll watch it for the first time tomorrow, along with everyone else.

The rest is up for Europe to decide.

M People slam Liz Truss for using Moving On Up – ‘Our song isn’t a soundtrack to lies!’ | Music | Entertainment