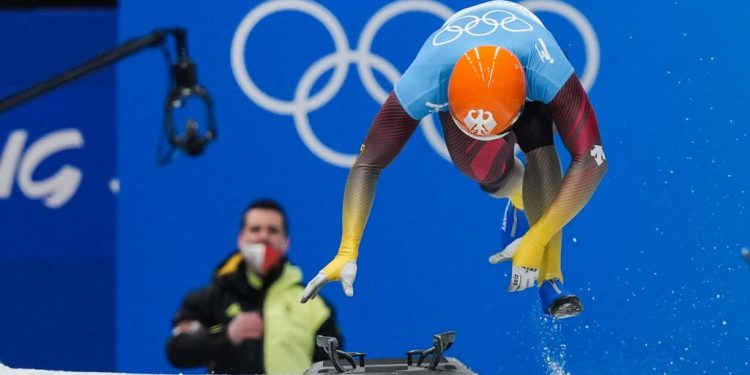 
The Skeleton events are now well underway at the Winter Olympics in Beijing, but just how exactly do Skeleton sleds go? What is the top speed?

Germany cleaned house in the Luge events in Beijing, winning in the Men’s, Women’s and mixed relay.

In total, they won all four golds on offer, and two silvers for good measure.

Now the luges are put away and set to be packed off to Milan in 2026, the Skeleton takes over.

Similar in that it involves throwing yourself down an icy course on a board and trying to break the timing beam first, Skeleton is slightly different.

Whereas Luge is done on your back, Skeleton athletes lie on their front – their faces inches from the ice.

But just how fast do Skeleton sleds go? What is their top speed?

The Skeleton events at Beijing 2022 are taking place on largely the same course as the Luge events.

There is a difference in where the two events begin, but both finish in the same place at the Yanqing National Sliding Centre.

Typically Skeleton sleds go about 75-80mph on the course – helped by the running start and grooves to get athletes going.

In Beijing, in the Women’s Heat 2 event on Friday, Canada’s Mirela Rahneva clocked the fastest speed.

On his first run, Grotheer managed to get his skeleton sled up to a highest speed of 130.49km/h.

How it Skeleton compares

Of the three main sled sports at the Winter Olympics – Skeleton is actually the slowest.

Both Luge and Bobsleigh can reach speeds in the 90mph region – with one athlete in 2010 reportedly getting his Luge up to 96mph in Vancouver.

It made another appearance at the same venue in 1948, but was not seen again in the 20th Century.

Skeleton and its sleds was reintroduced at Salt Lake City in 2002, and has appeared in Turin, Vancouver, Sochi, Pyeongchang (below) and now Beijing.

In other news, Betty and Miles Davis’ whirlwind romance made a lasting impression on music