How long-term benzodiazepine use leads to cognitive impairments 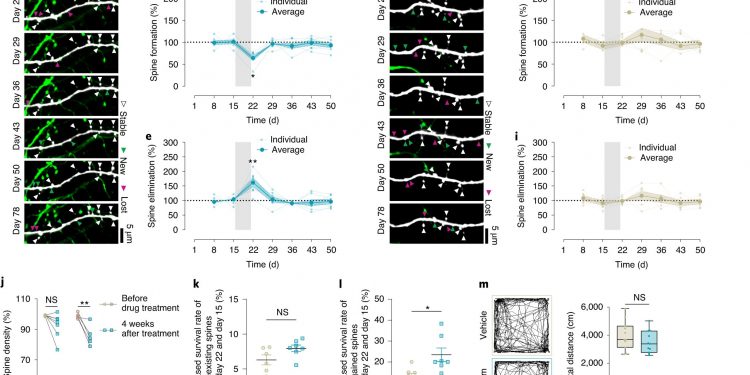 
Benzodiazepines are effective and widely used drugs for treating states of anxiety and sleep disorders. While short-term treatments are considered safe, their long-term intake can lead to physical dependence and, particularly in the case of older people, to cognitive impairments. The mechanisms by which benzodiazepines trigger these changes had previously been unknown. Researchers led by Jochen Herms and Mario Dorostkar from LMU’s Center for Neuropathology and Prion Research and the German Center for Neurodegenerative Diseases (DZNE) have now been able to demonstrate in an animal model that the active ingredient leads to the loss of neural connections in the brain.

A key role is played by immune cells of the brain known as microglia. Benzodiazepines bind to a specific protein, the translocator protein (TSPO), on the surface of cell organelles of the microglia. This binding activates the microglia, which then degrade and recycle synapses—that is, the connections between nerve cells. Experiments carried out by the scientists showed that the synapse loss in mice that had received a daily sleep-inducing dose of the benzodiazepine diazepam for several weeks led to cognitive impairments.

“It was known that microglia play an important role in eliminating synapses both during brain development and in neurodegenerative diseases,” say Dr. Yuan Shi and Mochen Cui, co-authors of the study. “But what really surprised us was that such well-researched drugs as benzodiazepines influence this process.” When diazepam treatment was discontinued, the effect persisted for some time, but was ultimately reversible.

In the opinion of the researchers, the study could have effects on how sleep disorders and anxiety are treated in people at risk of dementia. “Drugs that are known to have no binding affinity to TSPO should be preferred where possible,” say the authors.

Inside Mortimer’s, NYC’s most exclusive celeb and society club