How much will Rhyne Howard make as the WNBA’s No. 1 pick? 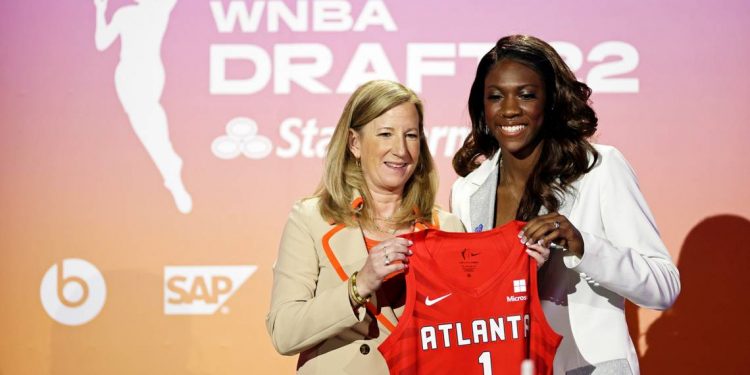 
Rhyne Howard’s career as a professional basketball player began this past week, when she became the first Kentucky player selected with the top pick in the WNBA Draft.

On April 11, the Atlanta Dream selected Howard with the No. 1 overall pick, helping Howard create a final moment of UK history before embarking on the next chapter of her playing career.

For those curious about what the monetary value is for being the No. 1 overall pick in the WNBA Draft, an essential resource is Her Hoop Stats, which offers a detailed look at rookie scale contracts in the league.

The current WNBA Collective Bargaining Agreement — the agreement between the WNBA and the WNBA Players Association — was signed Jan. 17, 2020, and covers the 2020 through 2027 seasons.

The CBA outlines the base salary — the salary without bonuses — and the length of rookie contracts.

Under the current CBA, all drafted players — like Howard — are given three-season contracts with a team option for a fourth season that would come with another significant increase in base salary

Rookie base salaries are not guaranteed, which means players are paid only for the portion of the season they are on the roster.

This isn’t expected to be a factor for Howard, who will be a key player on a rebuilding Dream team.

It also doesn’t account for marketing and endorsement money, as well as additional salary from playing overseas during the WNBA offseason, which is commonplace.

While WNBA rookie scale contracts continue to increase each year, a sizable gap still remains in comparison to the NBA.

What will Louisville’s two WNBA Draft selections make this season?

Two other players with Kentucky ties were selected during the April 11 WNBA Draft, both after playing collegiately at Louisville.

With the No. 4 overall pick in the draft in the first round, the Indiana Fever selected forward Emily Engstler.

With the No. 16 overall pick in the draft in the second round, the Los Angeles Sparks selected guard Kianna Smith.

The WNBA rookie scale groups together draft selections 1-4, so Howard and Engstler are on the exact same base salary path.

Because rookie base salaries are not guaranteed, this is contingent on Engstler and Smith sticking around with their respective teams.

AFL live: Hawks and Cats to pack the ‘G in Easter Monday clash

Can we close the retirement security gaps in America?

Can we close the retirement security gaps in America?