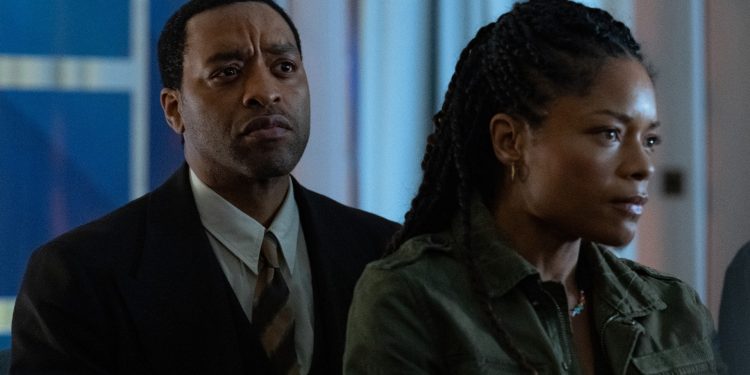 
Ejiofor’s approach doesn’t mirror Bowie’s at all. It is an inspired contrast. Because we’ve seen who he becomes, he never actually appears frail. The audience never quite fears something will forever damage him, until he comes to understand emotional agony in a human sense. Newton was practically dissected alive, and the naturalness of Roeg’s simple cameras make it agonizingly real. Contemporary special effects are so improved, pain has become surreal. In the film, Newton is revealed to have a sexless body, at least as far as human anatomy goes. When Faraday enters a hotel room naked at one point in the series, Hatch commends him on his penis.

Bill Nighy plays an older version of Thomas Newton in the series. This contradicts the movie. In the final scene of the film, Bryce tracks down Newton through a musical album the reclusive extraterrestrial released under the stage name The Visitor. Everyone around Newton has aged, but he is the same youthful, rusty haired alien he was at the beginning of the film.

In Roeg’s film, overlapping frames and disjointed scenes make it appear there is more to Newton than meets the eye. He picks up radio signals, chatter, and static, we don’t know if he is telepathic. “Get out of my mind,” he yells at TV screens. The series makes it clear that Faraday has overactive senses. He hears faraway conversations, smells fear, and tastes loneliness. Newton learned everything he knows about Earth from television, which shows images but doesn’t say anything.

The biggest difference between the series and the film is approach. The series is straightforward storytelling, while Roeg’s film is a work of expressionism, and peripherally myopic. The Man Who Fell to Earth is unlike any other science fiction movie. Roeg experimented with narrative in most of his films. Time is fluid and unpredictable. It moves disjointedly. Director Roeg gets as distracted by human dalliances as alien Newton. The movie is filled with digressions, gaps of logic and continuity, and extreme tone changes.

The series is a more conventional science-fiction adventure, with clearly delineated good and evil players. It is a purposeful adaptation of the characters in Tevis’ novel, set in today’s world. This is part of the evolution Faraday promises, in some ways. When Bowie’s ethereal extraterrestrial first crash-lands in a lake in Kentucky, he is a stranger in a strange land, new and still adjusting his eyes. When Ejiofor’s interstellar immigrant spirals into the New Mexican desert, he is following the first emissary. In the interim, earthlings achieved eye-opening technological proficiency on a global scale. We all got wired, as well as becoming familiar with alien presence through Star Wars, Close Encounters of the Third Kind, Alien Nationand The X-Files.

Kurtzman directed the first four episodes made available to the press, and wisely assumes the TV audience’s comfort with aliens living among us. Mork, from Ork, sat on his own face in our living rooms, and for every cautionary tale like Roswell there are warm affirmations of life to be found on Third Rock from the Sunno matter how big your head is.