How the cells within breast tumors communicate with each other 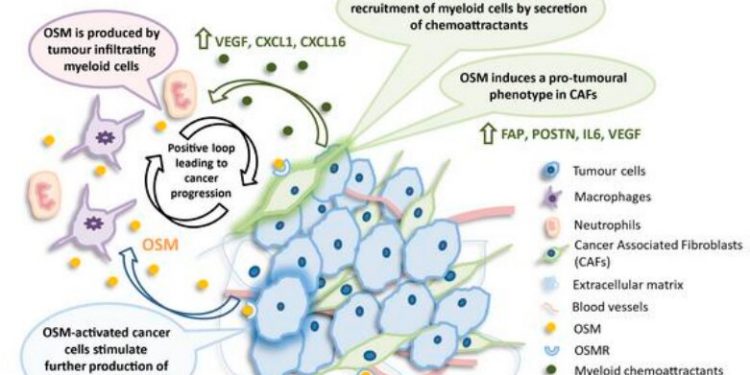 
An article recently published in The Journal of Clinical Investigation by the group of Dr. Maria Caffarel and Miguel Servet shows for the first time that the proinflammatory cytokine Oncostatin M (OSM) favors breast cancer progression and metastasis, acting as a messenger between different populations of the tumor microenvironment.

Tumors are not only composed of cancer cells, but also contain other cells such as immune cells, endothelial cells that form blood vessels, and fibroblasts, which have traditionally been considered support cells. All these cells form the tumor microenvironment, which is known to contribute to tumor progression. Understanding how different cell types communicate with each other is key to design effective strategies against cancer. Cytokines are signaling molecules typically secreted by immune cells to send signals. The Breast Cancer group from Biodonostia Health Research institute has found that the OSM cytokine is a messenger used by the different cell types within the tumor microenvironment to communicate with cancer cells.

“The OSM pathway activates an intriguing pro-tumoral ‘ménage-à-trois’ between immune cells, cancer-associated fibroblasts and cancer cells, which favors breast cancer progression and metastasis,” explains Caffarel. The first step was to block the OSM pathway and its receptor in animal models of breast cancer.

“We observed that, when this pathway was silenced, breast tumors grew less, were less aggressive and the number of mice with lung metastases was very significantly reduced,” says Angela Araujo, first author of the study. And she adds: “When we blocked this pathway only in the tumor microenvironment, and not in cancer cells, we saw the same effect, confirming that the microenvironment was very important in the pro-tumoral effect of OSM. “

According to the results of the research, mainly performed by Angela Araujo and Andrea Abaurrea as first authors of the study, tumors with high levels of OSM are associated with a worse prognosis in patients, opening a new possible treatment strategy based on inhibiting OSM in breast cancer tumors.

“There are already clinical trials investigating the use of antibodies blocking OSM and its receptor OSMR in other pathologies. Our study supports that these antibodies should be tested in clinical trials of breast cancer,” concludes Andrea Abaurrea.

Citation:
How the cells within breast tumors communicate with each other (2022, March 24)
retrieved 24 March 2022
from https://medicalxpress.com/news/2022-03-cells-breast-tumors.html

How to compost with worms for beginners