How to catch and collect Thermal Fish in Fortnite 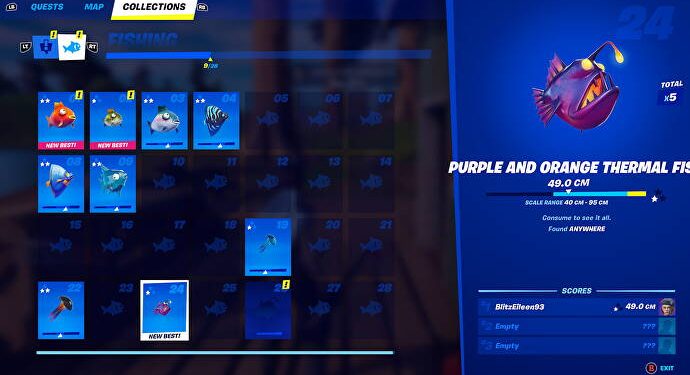 
Catch or collect a Thermal Fish is one of the Seasonal Challenges in Fortnite Chapter 3 Season 2.


To complete the quest, you must either use a fishing rod to catch a Thermal Fish, or find one amongst loot.


Completing this challenge will reward you with 20K XP, which will help you unlock skins from the new Battle Pass.

How to catch a Thermal Fish in Fortnite


The description is referring to the rarer versions, like the Silver or Raven kind. The Purple and Orange Thermal Fish, however, is very common, and can be found anywhere.


However, this doesn’t mean it’s a guaranteed catch, so it’s recommended to start your search for a Thermal Fish in an area that contains a lot of fishing spots. We recommend the large lake found to the east of The Fortress.


Land on the northside of the small island in the lake’s middle and grab a fishing rod from one of the barrels on the wooden pier. Then search for any white circular areas in the lake to cast your line in and start searching for a Thermal Fish.


If you catch a Thermal Fish and it doesn’t mark the challenge off, try picking it up and consuming it.

Chapter 3 Season 2 has arrived! New additions include Cow Catchers, red and blue lines on the Fortnite map and Rebuilding quests, including finding and destroying a IO Build Jammer and recovering the missing Battle Bus Plans.

There are also Resistance quests to complete, including deploying Aquatic Relays and transmitting data to a drone.

Meanwhile the Victory Crowns andcharacter collection have reset, while there is a new Victory Umbrella to find.

How to collect a Thermal Fish in Fortnite


Thermal Fish can also be found as loot, most commonly in Ice Machines or Ice Coolers. Just like chests, however, they are not a guaranteed spawn, so it’s best to visit an area containing multiple Ice Machines or Coolers. Gas stations and restaurants tend to have Ice Machines either inside or just outside their buildings.


We recommend going to the gas station southwest of the IO Blimp at Rocky Reels. There are three possible Ice Machine spawn locations in this area.


The first Ice Machine is beside the vending machine outside the gas station.


The second Ice Machine is in the basement of the building west of the gas station.

The third Ice Machine location is in the bar area of the building west of the gas station, opposite a Bounty Board.


If none of these locations turns up a Thermal Fish, you can either leave the match and try again, or visit other gas stations around the map in search of other Ice Machines.

If you like to learn more about Fortnite Chapter 3 Season 2, check out our guides on the character locations, Aquatic Communication Relays locations, Cow Catchers, Battle Bus Plans locations and how to transmit data to a drone, including drone locations, explained.

The Champions League: and then there were four – Football Weekly Extra | Football