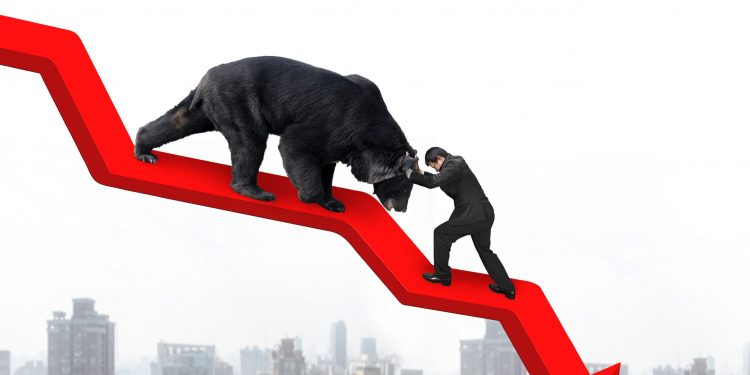 
Using puts to profit from a plunge in a lower cost lower risk manner.

The old market adage says that stocks go up the escalator and down the elevator. This means that rises in equity prices tend to be slow and steady while drops tend to be swift and violent. Certainly, the price action witnessed in January will attest to that.

2022 may finally be the year that stock gains start to flatten out, especially given the big gains seen over the past few years. The tide that lifted all ships-the Federal Reserve-is set on raising rates and removing liquidity for the foreseeable future. This will be a decided headwind for stocks.

This doesn’t mean that all stocks will go nowhere in 2022. Quite the contrary. In every market there are big winners and big losers. It just means that now you need to really do some deeper digging to uncover those hidden gems-and sift out the fool’s gold.

You can try to do the all the number crunching and hard work yourself. Or you can do what I do and have all the work done for me by using the POWR ratings. It is a time-tested and more importantly battle tested way to find the future big winners and big losers alike.

The historic performance of the POWR ratings versus the S&P 500 since 1999 is shown below. 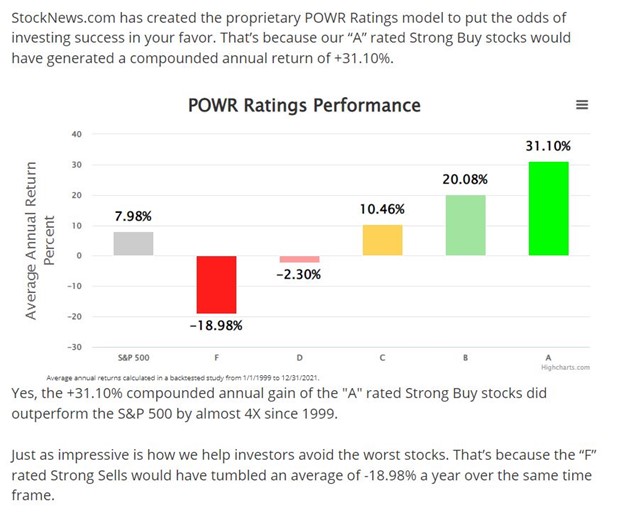 If you do the math, the A rated Strong Buy stocks outperformed the S&P 500 by an astounding 23.12% since 1999. The F rated Strong Sell stocks underperformed by an even greater degree, dropping 26.94% compared to the S&P 500. This means the power of POWR stocks is even more powerful in picking bad stocks.

Instead of shorting stocks to profit from a drop, POWR Options uses the ratings but buys puts instead. This lower risk, higher potential profit approach reduces the angst and eliminates the higher margin requirements needed for shorting a stock.

A recent look at our latest trade in Royal Carribean  Cruises (RCL) on February 10 may shed some light.

RCL is an F rated Strong Sell stock in an F rated Industry. It had rallied sharply off the recent lows but was approaching resistance at $90. Shares were overbought on a technical basis. RCL had just reported earnings that missed on both the top and bottom line-yet the stock moved higher.

Implied volatility (IV) was cheap at only the 19th percentile following earnings. This set up ideally for a bearish put trade.

POWR Options recommended buying the June $80 puts for $4.00 per contract-or $400 per option. Our bearish expectations were immediately realized the following day as RCL dropped 4.41% from $88.05 on Thursday’s close to $83.96 on Friday.

The June $80 puts were closed out at $5.00 on Friday for a nice one-day gain of 25%-or over 5 times more than stock drop of 4.41%. This highlights the leverage effect that options can provide to propel profits much higher than stocks.

Of course, not every trade works out this quickly, or this well. But since the POWR Options program began last November, there have been a total of nine bearish put trades. All nine of these trades were closed out for a gain. The results are shown below.

Combining bearish positions along with bullish trades is even more critical now that stocks seem to have finally found some resistance. Higher interest rates along with historically stretched valuations make it more of a stock pickers market. Using the POWR ratings to uncover these winners and losers and POWR Options to lower the risk and increase the potential return is more vital now than ever.

What To Do Next?

If you’re looking for the best options trades for today’s market, you should check out our latest presentation How to Trade Options with the POWR Ratings. Here we show you how to consistently find the top options trades, while minimizing risk.

If that appeals to you, and you want to learn more about this powerful new options strategy, then click below to get access to this timely investment presentation now:

How to Trade Options with the POWR Ratings

About the Author: Tim Biggam

Tim spent 13 years as Chief Options Strategist at Man Securities in Chicago, 4 years as Lead Options Strategist at ThinkorSwim and 3 years as a Market Maker for First Options in Chicago. He makes regular appearances on Bloomberg TV and is a weekly contributor to the TD Ameritrade Network “Morning Trade Live”. His overriding passion is to make the complex world of options more understandable and therefore more useful to the everyday trader.

Tim is the editor of the POWR Options newsletter. Learn more about Tim’s background, along with links to his most recent articles.