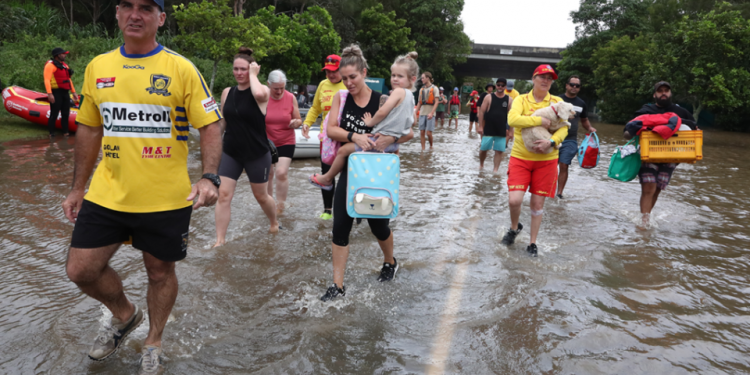 
Deadly floods in Queensland and northern New South Wales have demonstrated how important it is for people to have a flood plan, and with heavy rain moving south towards Sydney, it’s more important than ever for people to be prepared.

“Communities up on the north coast, they do get frequently affected by floods and have a level of preparedness,” Mr Gissing told The New Daily.

“But there’s a danger sometimes that they can anchor their perception of floods to historical floods, rather than treating the flood as it’s predicted.”

There are also flash-flooding hotspots around the inner west and in the Hills District, Mr Gissing said.

“Heavy rainfall which may lead to flash flooding is forecast to develop over parts of the Hunter and Metropolitan, Illawarra, South Coast and parts of Central Tablelands and Southern Tablelands Forecast Districts from [Tuesday night],” the Bureau of Meteorology said in a flood warning on Tuesday.

“Locally intense rainfall leading to dangerous and life-threatening flash flooding is possible with thunderstorms with six-hourly rainfall totals up to 200 mm possible.”

As the rains come, here’s how to prepare.

1. Avoid flood waters at all costs

Mr Gissing said entering flood water is “the most dangerous thing you can do”.

The best way to avoid the water altogether is to be prepared.

“If you follow advice and evacuate early, you shouldn’t have to wade out through water or anything like that,” Mr Gissing said.

The Bureau of Meteorology publishes flood watch updates as well as warnings for every state and territory.

People experiencing severe rainfall should monitor these updates to see if there’s a chance of flooding.

Local councils also publish flood plans that outline at-risk areas, as well as where to go if a flood does occur.

This information can typically be found on each council’s website or by ringing them directly.

If possible, it also helps to double-check insurance coverage and confirm any emergency contacts.

3. Make sure you have what you need

Australia has a problem with panic-buying, but people do need to make sure they are stocked up on certain items when a flood is imminent.

“Once you know you’re at risk, you can arm yourself,” Mr Gissing said.

He suggested people stock up on things like medication, torches, batteries and pet food as part of their emergency kits.

“Always check in with the neighbours to make sure everybody else is OK,” Mr Gissing said.

“Because as we’re saying in the Northern Rivers, it’s the community cohesion, neighbours looking after each other, at this sort of time that gets people through.”

Dr Mel Taylor, a project leader in the Bushfire and Natural Hazards CRC specialising in flood risk communication, said it’s also a good idea to fill up on petrol before a flood hits.

She added that encouraging kids to pack a pillowcase of things they care about will help them to be actively involved and confident.

4. Get your house ready

Before a flood hits, there are things you can do to minimise potential damage.

Mr Gissing suggested that people with double-storey houses take all their electronics to the upper levels.

Dr Taylor pointed to the Victorian SES flood preparedness campaign, calling on people to “bag it, block it, lift it and leave”.

People opting to use sandbags should cover them in plastic garbage bags to make them waterproof.

Sandbags, if used, should also be placed in toilets and other drain holes to stop stormwater and sewage from flowing in through the plumbing.

5. Have an evacuation plan

With all of the above in mind, it’s essential to have a plan to evacuate when things get too dangerous.

A key part of this is to know what roads will likely also become flooded, and therefore unusable, and figuring out a safe route to higher ground.

Dr Taylor suggested friends or family as a safe port of call.

“Evacuation centres may be set up but are a last resort rather than something to plan for if you have other options,” she said.

During the current spate of floods, many households have had to leave their pets behind.

“Pets are part of your plan,” Mr Gissing said.

Dr Taylor agreed, and added that people need to think early on about getting their farm animals to safety.

She has been working in the NSW SES in the Hawkesbury-Nepean area to help horse owners make plans.

With the Intergovernmental Panel on Climate Change this week warning that Australia will face “cascading, compounding and aggregate” natural disasters as global temperatures rise, Australians need to be more prepared than ever.